Well, that's the city done for now.  We had a lovely few days in Birmingham, but we decided to make a run for the Dog & Doublet at Bodymoor Heath, before the forecast storms arrived.  Dave was still smiling after meeting his heroine Cerys Matthews at the concert we went to a few days earlier.  We - or rather I - had a dilemma:  do we stay for the Black Sabbath concert in the NIA on the Sunday night, then leave in the forecast hurricane on the Monday, or go while the weather is good. I'm ashamed to say, that I took the latter option, and ran away while the sun shone.  I know, I know, those reading this from long, long ago, will, at this point, clasp their foreheads, and shout NO!, but I'm afraid folks, again I must be getting old, and took the easy weather option, so no Ozzy for me this year! 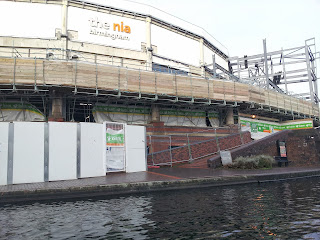 There's a lot of construction work going on at the NIA, and the company carrying out the work is BAM Nuttall - who I worked for, for almost 20 years in the North West - when it was plain old Edmund Nuttall Ltd.  A previous life! 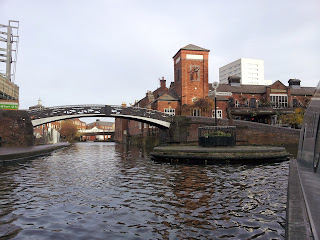 We had our own boat trip round the city centre, when we topped up with water and went to get diesel - we wanted to ensure we were topped up in case they closed for Christmas.  We did try and use the Away-2-Service boat, but the skipper was playing Father Christmas for the week, so no services available. 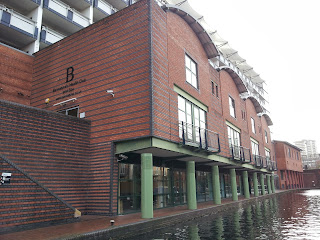 Round Sherbourne loop, passing Duncan Bannatyne's gym.  I refrained from taking photos of the panting masses on the gym equipment in the window! 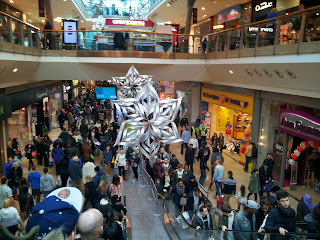 And yes, we did venture into the city centre on the Saturday before Christmas.
Hell!!  Hell I tell you!
You had to move with the masses, like being on a conveyor belt, propelled along.  Very tricky when you wanted to make a right turn.  The actual plan was to avoid all this and head directly to the meat & veg market, by means of the back door, and then run away.  This first part of the plan went very well, as we know our way around abit now.  However, on reaching the markets, we realised we had overlooked one critical thing - CASH!  The brusque market traders wouldn't be very impressed with our 'plastic'!  So we then realised that we would have to find an autobank.  The nearest shop at that point was Selfridges, which led into the Bull Ring shopping centre.  No problem - bound to be a hole in the wall here! - then we saw the crowds!  After a quick look at the shopping centre map, we joined the heaving masses up the escalator, quickly found the nearest cash point, and left by the quickest way possible.  How can anyone say that this could be an enjoyable experience? 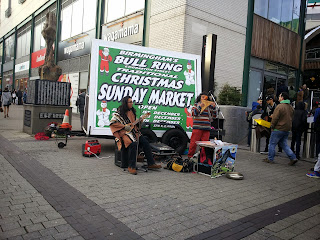 Horay!  It's Pan Pipe Man.
My Christmas would now be complete after hearing him - and he's got a mate with him.
(readers of the blog will recall him popping up in every town centre we visited over the last few Christmases) 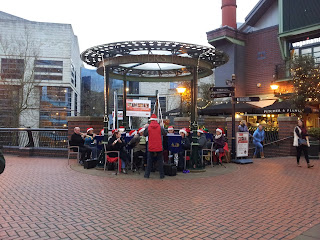 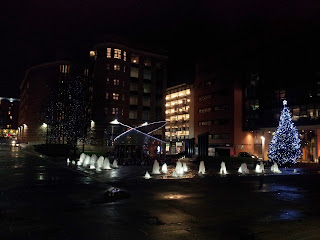 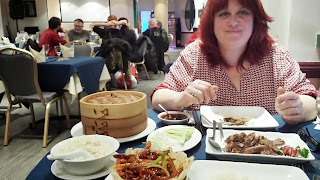 Ooh, and we went for a lovely Thai banquet as well!
(I should have been holding the chopsticks for effect) 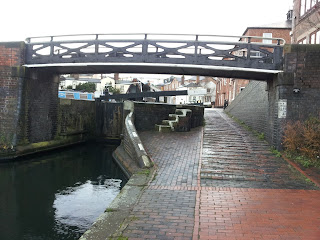 And so we moved out of Birmingham before the weather turned.  We had been for a walk the previous day, and noticed that the bottom gates on the top lock at Farmer's Bridge were open, with the paddle up.  "Ah, one coming up" we thought.  However, as we continued walking, we discovered that it was a boat going down.  "Excuse me - but why are you leaving the gates and paddles open?"  They replied "For any boats coming up, of course".  "But what about those coming down behind you - like me" (didn't tell them that we weren't coming down till the following day).  Dave explained that this was not the done thing, and they should close all gates and paddles.  This then started a row - between the couple on the boat going down!  "See!  I told you we're supposed to shut the gates" etc etc. We hurried away and left them to it.  Thankfully, when we started our descent the following day on the boat, all the lock gates and paddles had been closed. 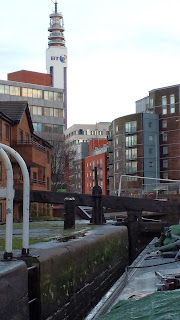 Going down Farmer's Bridge Locks - there were a lot of locks to get UP to Birmingham, now there's 35 to get down today!  (Who'd have thought it was up hill to Birmingham!) 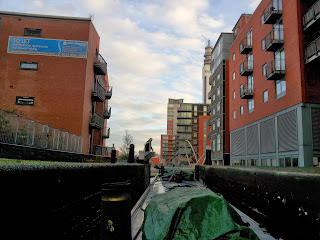 Lots of fancy apartment blocks built along the canal. 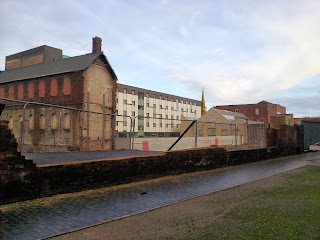 The old, and the new. 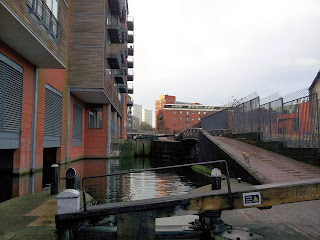 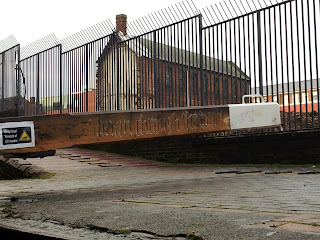 The carved lock gate poetry has reached here too.  I suppose it's better than some of the graffiti. 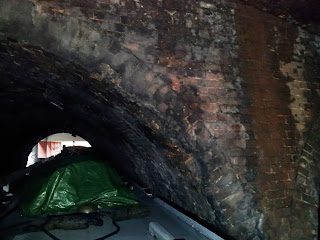 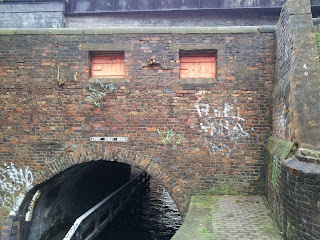 You'd think that these openings in the wall on the bridge are part of an old warf - or toll house, but it's for the Fire Service etc. to rescue people from the canal, or to get water for their pumps. 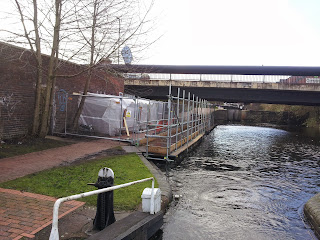 Ah - just what you don't want to see when you're dodging stoppages - lots of scaffolding in the canal!  This pic was taken once I'd got past it and into the next lock (once I'd found my camera).  When I came out of the lock (above), I saw all this scaffolding and immediately thought "AHHH, I've got it wrong, and this bit of canal is closed!  No need to panic - there's still work continuing through Aston Locks, but the canal is open.  Phew! 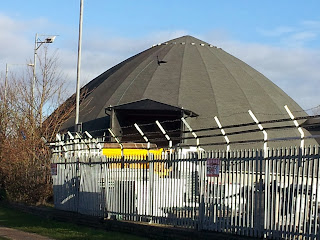 Ah, the grit store nearing the bottom of Aston locks.  You can't see it very well, but it is stuffed to the gunnels with grit.
At the bottom lock of the Aston flight, the ratchet was missing from one of the top paddles, so I sent a tweet to CRT on line with the problem, and the exact location.  I had a reply back to say that my report had been forwarded to the team at Brentford!  I replied that why would a problem on a lock paddle at Birmingham be passed on to Brentford.  Duh!  It all got sorted after a few 'tweets'.
So we carried on going down Curdsworth and rubbish strewn Minworth, and eventually arrived at the Dog and Doublet at Bodymoor Heath... but that's in the next blog.  Maffi has shamed us into picking up rubbish where we see it, but the amount thrown into the canal around Minworth is shameful.
Posted by Sue Hunter at 18:15