Christmas at the Dog & Doublet

We've had a lovely few days here at the Dog & Doublet.  Yes - we have outstayed our "48 hours", and I know it's not the attitude to take - and we always stick to the rules (unless we physically can't move when we're frozen in), but there's a boat here that's been here for over 12 months!  On the 48 hour moorings!  I don't want to start a rant (Dave Smith!), so I'll just shake my head - it's just wrong!

Anyway, we love stopping here as Jim, Trish and the locals are always so friendly, and give a big welcome, and more to the point, remember us, which is always nice, when you only visit once a year.  While we were here I looked up the Dog & Doublet on "Trip Advisor", and found quite a few negative comments listed.  The only thing I can say is to those who do give negative comments:- whenever you walk into a pub, try smiling yourself first, then give a cheery "hello" - I'm sure you'll find the response from bar staff rather different (I say this, after spending many years serving behind the bar).  If the service is still crap, then fair enough, comment away - but just give it a try!

Another reason for stopping here is the RSPB reserve 1/4 mile away at Kingsbury.  Unfortunately, after Dave packed his rucksack full of allsorts from flask to telescope, to venture on the first bird watching expedition, he was met with a load of signs "Do not walk here or you will be shot", or something like that.  It seems the whole area is in the middle of a "flood alleviation scheme", so access to the various hides from the towpath has been stopped.  We did see the start of it when we came this way last January.  Eventually, after a 2 mile detour, he managed to get to the lakes, but was rather disappointed by the number of birds - or lack of them.  He did see the odd golden eye, and crested grebe, which I'll put in a blog later. 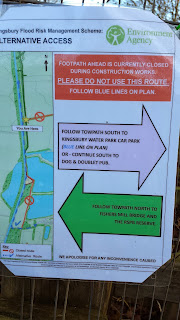 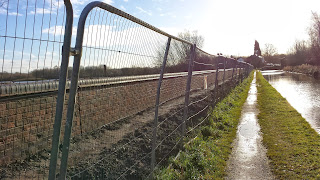 Towpath all fenced off into Kingsbury Water Park 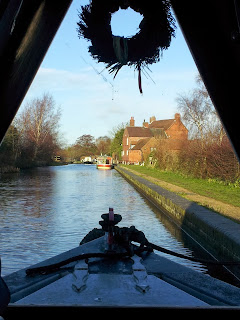 So this is our view - that's the pub in front of us - not bad eh!.  Nemo has been running around like a mad thing since we got here, as he was too scared to venture out in Birmingham as there was always someone walking past.  Despite his size, he is a bit of a wuss.  Ok a big wuss.
We've had the two fires burning, and are getting through the wood we brought with us.  I don't know what we're going to do when it actually gets cold, but for now, we're nice and toastie thank you very much, with the big wood burner going in the back.  Nemo appreciates it to.... 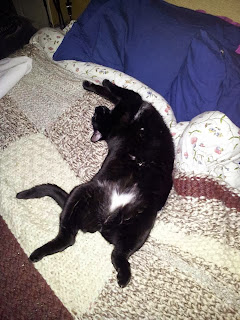