I'm going back to the start of our journey up the Caldon Canal, despite the fact that I've already posted pics of us at Consal Forge on my previous blog.  It's been 13 years since we were on this canal.  Dave spent a winter up here on Sans Souci, and I joined him at weekends.  It all seems new to us now, probably because much of the landscape around Stoke was completely different then to what it is now due to redevelopment of the old industrial land.  There was also a landslip at Cheddleton, so we couldn't go any further at the time.  A new housing estate was being built on top of the canalside bank which caused the landslip.  Hope they've stabilised the bank a bit better, as there's now alot of houses up there!

There wasn't anywhere to moor at Etruria (surprise surprise) due to the number of boats there, but we did manage to squeeze in on the end, using one of the lock bollards.  Naughty, I know, but it was getting dark, we'd be away early in the morning, and we'd hardly seen a boat moving all day.  Wouldn't you know it - within 5 minutes, a boat came past.  Never mind, they continued up the locks & moored there (we followed in their ice breaking trail the next morning).

Talking of mooring, there's alot being said at the moment on various boaty websites about 'continuous moorers'.  Well, we've certainly seen our fair share of them.  One of the contributors to Narrowboatworld, says there isn't a problem with overstayers and that there's plenty of room out there.  Well perhaps he should follow our route this winter, which proved otherwise. For example,  the boats moored outside The China Garden pub canal side at Etruria who moved to the 48 hour moorings during the Christmas break, and were still there when we passed last week.  As for the CRT mooring consultation, why can't they just enforce the rules which exist already?  Rather than move the goal posts.  Remember folks - this is just my opinion!  Moving on swiftly...... here's todays pics...... 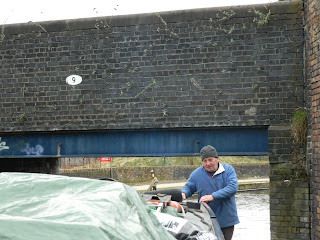 There's some low bridges around here! 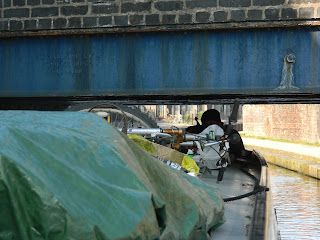 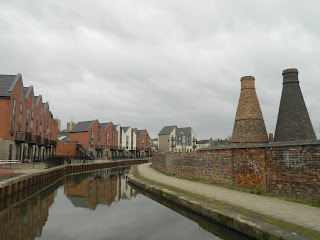 Some lovely new apartments have been built canal side, 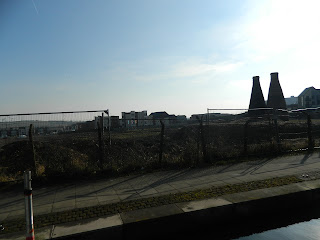 view looking back, the site has been cleared of the old buildings,
but the old kilns have been repaired and remain.
Again, I've failed!  After 2 hours 40 minutes, I have managed to load just 4 photos, so I'll have to try again tomorrow when I will hopefully have a better signal.  I don't know what the problem is, it's like there's some sort of interference, as signal strength is jumping from 3G+ 5 bars to disconnecting.  So tomorrow's blog will be pictures only (hopefully) without me whittering on.
Posted by Sue Hunter at 19:19

The 2 boats at the Industrial Museum
at Eturia and the ones around the corner towards the locks on the Caldon have all been there since before Christmas and CART workmen drive past each day.
but they seem to do nothing about them.Dave Beryl Nb Sokai