Onto the Macclesfield Canal

We turned onto the Macclesfield Canal, rounded the corner, and were met with this view - Mow Cop.  So we stayed put for a couple of days just admiring the view.  Although we weren't tempted to climb up to it! 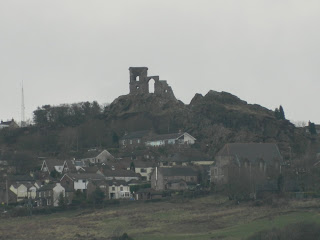 We managed to find a Co-op about 1/2 a mile from the canal near Hall Green as we were getting rather low on the essentials (red wine), thanks to the gismos on these new fancy phones we've got. This one was following a footpath from BR91 then turn left onto the main road.  'Apps' like "find nearest supermarket", the phone finds your location by GPS, then hey presto, tells you where the nearest shop is.  Just as well really, as we haven't found anywhere suitable to have a Tesco delivery for quite some time now. 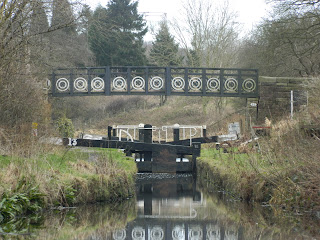 This is Hall Green Stop Lock, the original start of the Macclesfield Canal, from the Trent & Mersey.  The lock was installed to stop the two canal companies stealing eachother's water.
Very fancy footbridge. 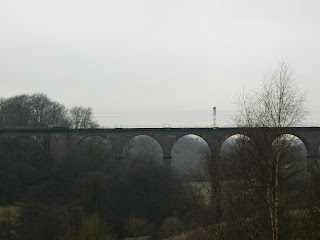 Just after Congleton, the first of many spectacular viaducts appear,
which dominate the landscape all the way up the canal. 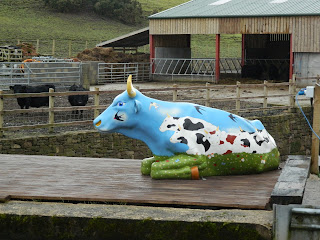 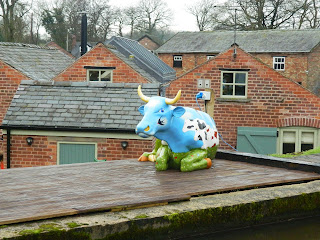 Fancy someone going to the trouble and expense of this comedy cow, just for the amusement of boats and walkers on the towpath.  Certainly brought a smile to my face.
We weren't impressed with Congleton at all - as indicated in a previous blog - due to the amount of dog poo on the towpath.  The most I managed to walk without having to dodge another dollop of it was 12 paces.  At least we got a mooring here, so we did stop for the night, as it had started to snow. 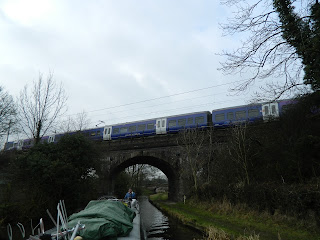 Passing under the start of a viaduct, which goes on... 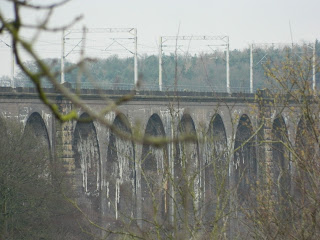 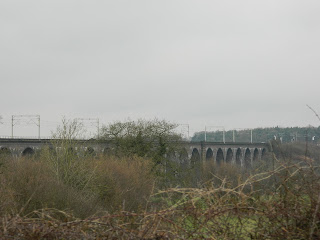 and on, right accross the Goyt valley 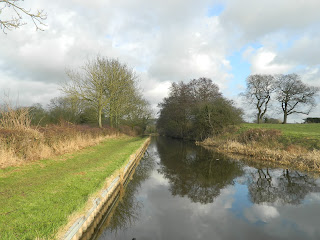 We found this lovely spot, just past the viaduct. 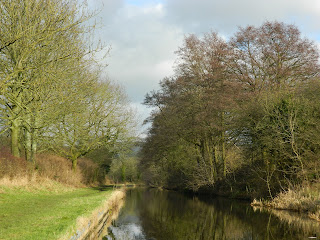 The sun even came out.
We moored here for a couple of days as it was so peaceful and away from it all.  Yes, there were trains every half an hour or so, but in between them, there was absolute silence.  Nothing.  Nada.
No cars, and no lights at all.  Absolute silence. Absolutely stunning. 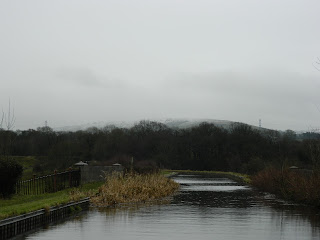 The Dane Aqueduct, approaching Bosley locks
We weren't that far away from the bottom of Bosley Locks, unfortunately I didn't take any photos as it was raining for most of the time and very overcast.  Of course it stopped raining once we got to the top of the locks - where incidentally, there is a very clean service block, with showers and a washing machine, which we'll probably make use of on the way back.  The locks themselves are a bit odd -  you can't walk across the top gates to get from one side of the lock to the other.  No matter, it was easier for Dave to close them himself after exiting the lock by stepping accross the stern, while I went on ahead.  We hadn't seen a boat moving for days, but after doing the necessary at the service block, another boat came up the locks behind us.  It was the same boat we had "shared" Harecastle tunnnel with.  Unfortunately for them, every lock had been against them.  Bet they were cursing - they ascend the locks 10 minutes after the only boat moving in days.  Sorry.  Lovely flight of locks and beautifully kept, but rather slippy on the muddy towpath, even with my walking boots on. 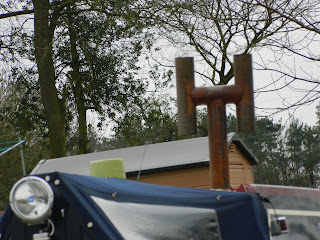 Random photo of the day - the wierdest chimney I've seen on a boat.  Mind you, our diesel fire has been inexplicably blowing out, leaving a horrible stink of burnt smokey diesel inside the boat.  So perhaps this boat has the remedy - a wierd chimney.
Posted by Sue Hunter at 15:00

Thanks for your nice comments about the Macclesfield Canal Society - We try to keep the boxes of maps & guides at Hall Green, Bosley & Marple full for visitors! Enjoyb the rest of your stay on the Macc.

Hello Ray. We missed the boxes of guides on the way up, but we've got one now from Bosley. The map inside is really useful - alot of work involved in producing it! Thank you. We've really ebjoyed the Maccy and look forward to our next visit.