It was nice to start cruising again, if anything to take our minds off who to vote for in the forthcoming C.&.R.T. elections.  Anyone else having trouble, should take a look at NB Takey Tezey's [click]summary of the nominees.

We've only got 5 weeks left now before Dave has to go back to Chirk Marina to start work - where did all the time go?  We've decided to go down the Trent and Mersey for a few days, firstly to meet up with Dot & Dave at Whychnor, and secondly because I have'nt done this stretch before, and it's been 17 years since Dave last came this way.  We've been to Alrewas a few times, and to Wychnor once - on Sans Souci about 10 years ago, when the Trent was in flood - well it wasn't when we went down, but running very fast.  It was raining, we stayed the night with Dot & Dave, turned and attempted to get back to Alrewas after it bucketed down all night.  Needless to say, the river was rather wild that morning on the way back, and Sans Souci's 10 horse power wasn't making any headway against the flow.  We were on full power but not moving.  I knew we were in the S**T when I asked Dave "Ah we'll be OK won't we?" and he said nothing, nothing at all.  Bu**er.  We inched towards the bank, the "other Dave" had run round over Alrewas lock to the other side of the river, ready to catch a rope should we turn with the flow and hurtle towards the weir.   However, good old Souci Babe crept accross the incoming Trent and we made it into the lock.  The lock was shut behind us due to flood conditions!  Needless to say, I develop a nervous tick anytime cruising on rivers is mentioned.

So, taking the bull by the horns, onto the T&M we went.  This walkway bridge is stuck on to the side of a bridge at Keeper's lock at Fradley.  There was a walkway accross here before, by why stick the ugly fencing accross it? 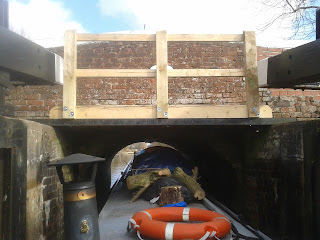 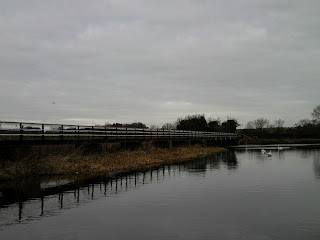 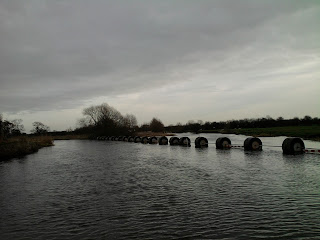 Past the weir - last time we went past it there were two giant hay bales and a dead cow washed up against it. 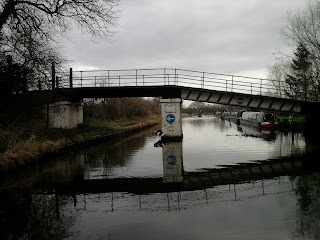 Make sure you stick to the left! 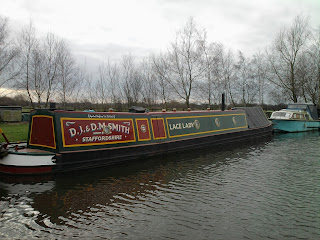 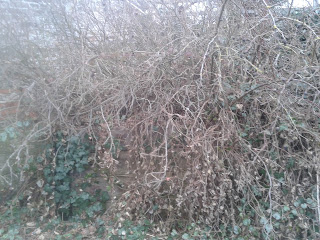 Dave took this photo - underneath the branches of this tree is a wooden trough which was always full of roses, tended by the local BW bod.  You can hardly make out the rotten trough at all now. 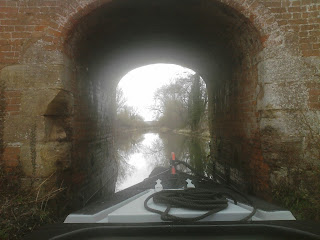 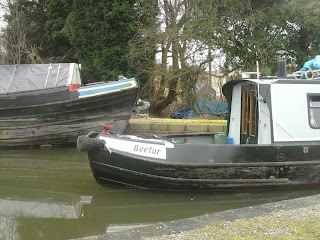 Now that's a bow.  Beefur's bow is dwarfed by the magnificent NB Hadley at Eggington. 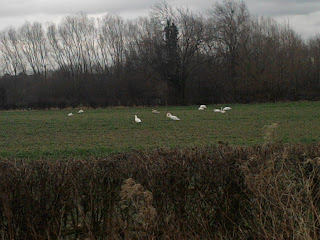 Don't think the farmer will be too pleased with a field full of swans eating his crops. 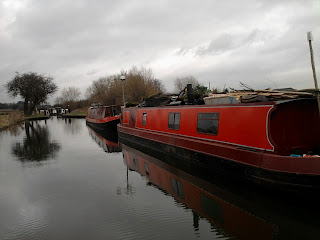 Luckily for us, BW were surveying this lock as we approached and opened the top gate for us, which is just as well, as these two boats were moored up occupying all the lock bollards, which would have made it very difficult for me to disembark. 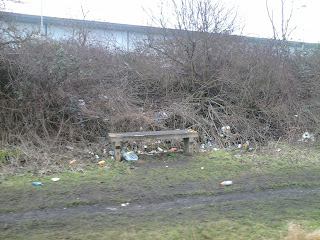 This bench in the middle of an industrial estate in Burton was obviously the bench of choice for breaktimes and/or lunch - with the unfortunate result of litter strewn everywhere.  Coke bottles, sandwich wrappers, banana skins, you name it.  Sorry to end on a bum note, but there's lots of jolly pics to follow tomorrow!
Posted by Sue Hunter at 21:29

Unfortunately, due to the death of a cyclist on the locks at Stourport 'elf and safety has decreed that all walkways at locks will acquire a fence. Doesn't improve the looks does it.

Takey Tezey Heth 'ere, noticed you're hanging round this area for a bit, we're moored in Mercia marina!

PS: Small thing (or large thing depending on how you look at it) TT is a widebeam lol

Hi Heth. Knew you were in there somewhere. We came for a look at the marina this morning but didn't like to lurk around looking for you. Quite an impressive set up they've got there. Love the blog. Sue