The police completed their search of the canal from Kings Bromley to Fradley & BW started re-watering the pound from Wood End Lock to Shadehouse at around 5pm, which had been virtually empty since Wednesday morning.  The pound below Shadehouse was also de-watered and searched.  The news is that the police didn't find the body of the missing 20 year old, which has to be good news, as there's still a hope that he will turn up alive and well somewhere. 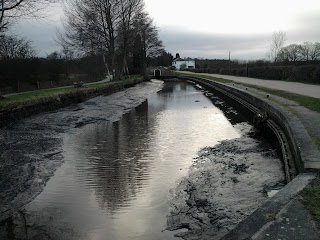 The empty pound below Shadehouse Lock.  The boats on the long term moorings on the left had moved down out of the pound a few days ago, as this section was due to be dredged - after complaints from the moorers that they couldn't get near the bank - not surprising when you see how much mud and silt had built up. 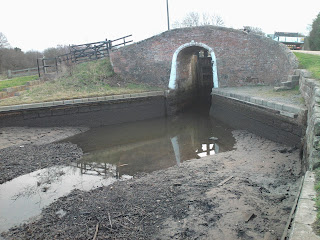 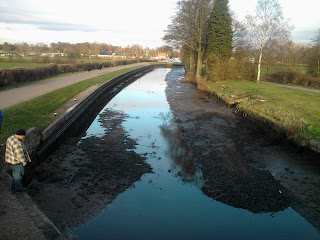 Boaters have been out scouting for the odd windlass etc, 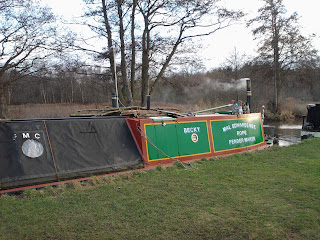 No room for us to moor at the top of Shadehouse.  One of the boats caught up in the fluctuating water levels is Malcolm Edwards OBE, or Mal of the Canal as he is better known.  (Hello to Mike & Hazel from Mal).  The boat movements started at 0640 this morning.  It's the first time I've seen 0640 in the am rather than the pm, for a long time!  We've resorted to 'Plan B' and I've got a lift from Dot & Dave to Lichfield station on Sunday, so we're hanging around Fradley for another day so we can watch the rugby.  We've made good use of the facilities at Francton Junction - the laundrette - I know you were thinking I was going to mention the pub - ah well, don't mind if I do ......
Posted by Sue Hunter at 11:48