Ah, recycling.  People half heartedly recycling is my second biggest hate (first hate of course is dog poo - don't get me started on that one!).  Recycling is not easy on a boat, due to the confined space.   There's no room to store all the recycling, as recycling points on the canal are few and far between. We usually end up walking miles with a trolly dolly full of empty bottles  glass jars, rattling away as we try and find a supermarket with recycling bins.  So after lugging the recycling round the country, you arrive at a CRT office which has a recycling facility (Fazeley), feeling righteous that you've saved a little bit of rubbish going into landfill, and relived that you're going to gain a bit more space on the front deck -  but you are met with overflowing bins, and of course, people who just lift a lid and shove anything in there.    I would have liked CRT to be a bit more proactive here, and get the bins emptied in anticipation of a busy half term, good weather period. 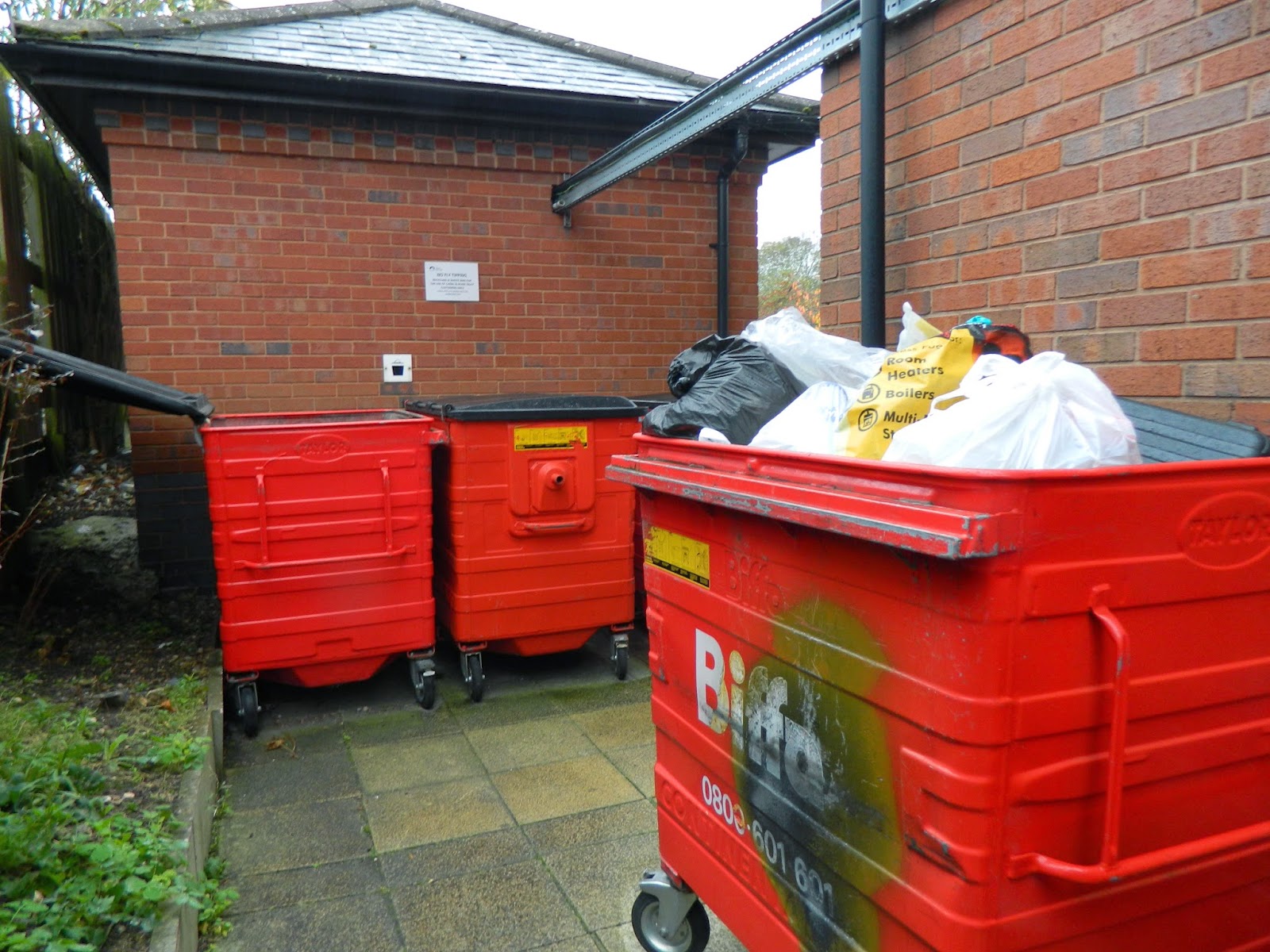 Now at Fazeley, there are six, yes six large wheely bin thingies purely for rubbish - so why do people - sorry boaters - as it can only be boater's using these bins - try and ram another full bag of rubbish into an already full bin, when there are three completely EMPTY bins four paces away. 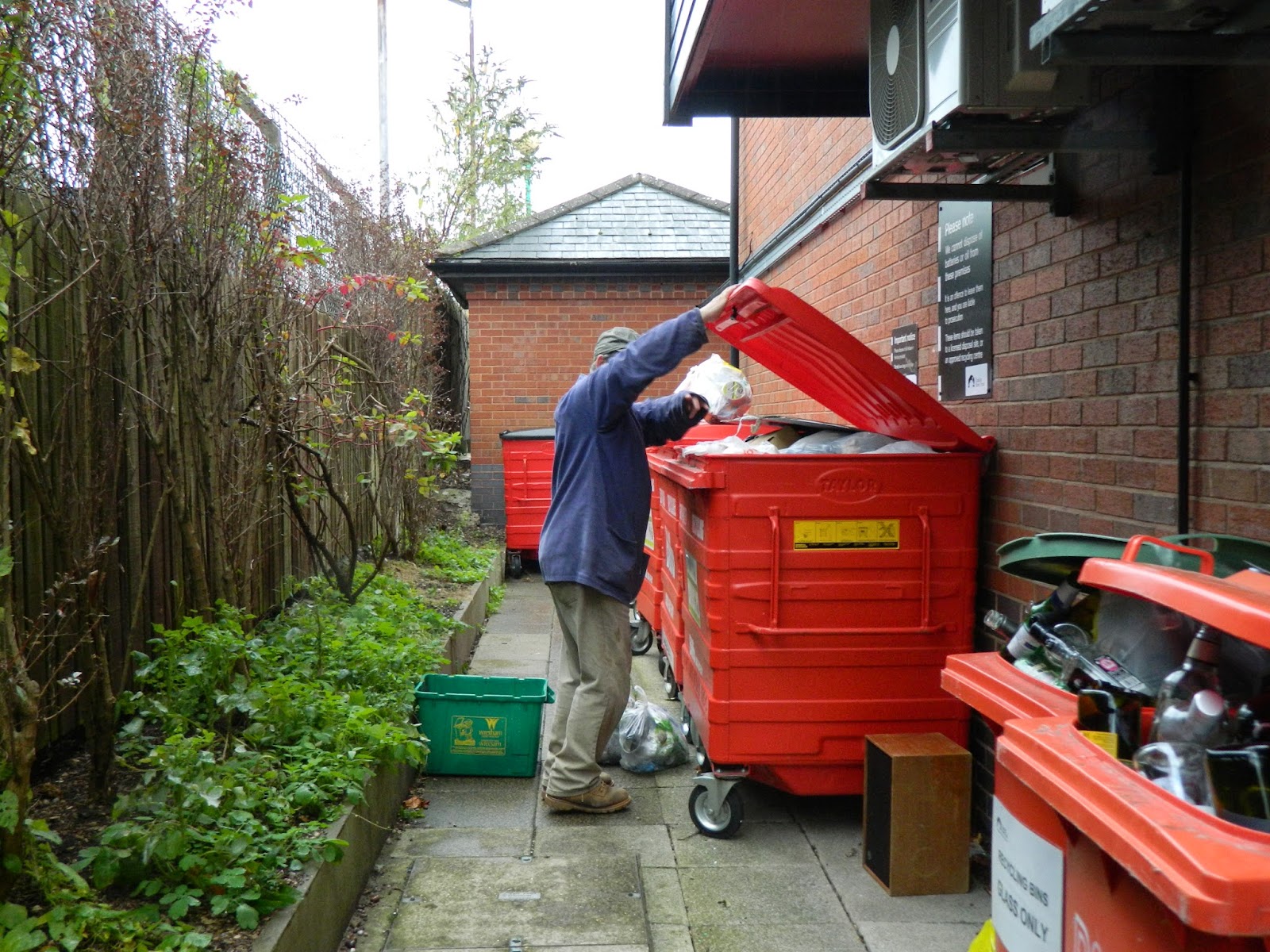 So Dave does his usual rubbish swapping.
Taking out bags of rubbish which have been stuffed into the already full recycling bins. 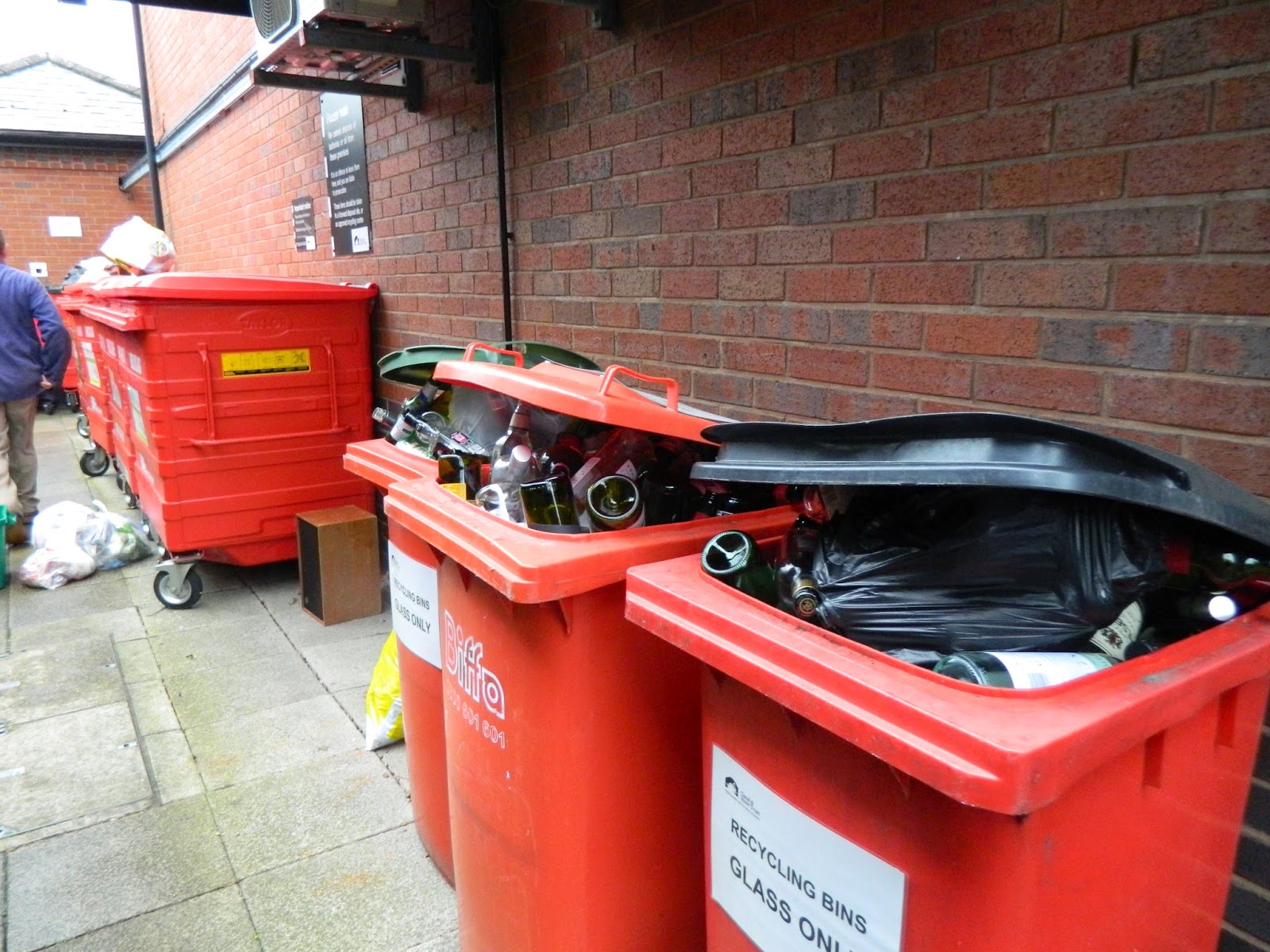 Now, when a recycling bin says "glass only", it means that only glass goes in there - not a black bin bag full of glass.  Why is that concept so difficult for people to grasp?  Once plastic goes into a glass recycling bin, then whole bin is contaminated and is usually scrapped and the whole lot put into landfill - unless someone goes through each bin and sorts it out before the "bin men" come and take it away.  Now I can't see the CRT office staff doing that - nor do I want them to - I'd much rather they do the job they're supposed to do - like sort out the canal system! 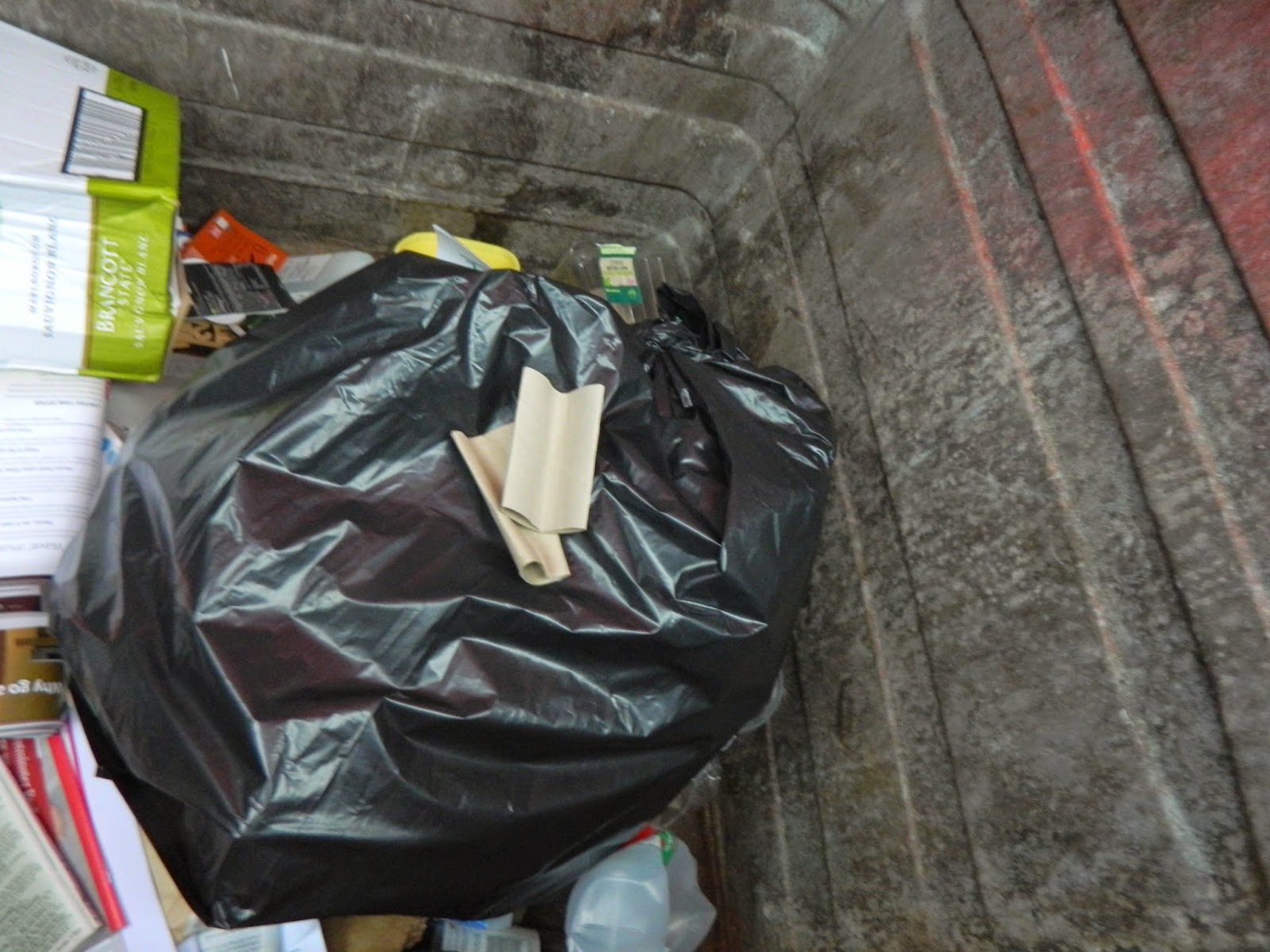 This black bin bag was in the paper recycling bin.  Now why would someone put a plastic bag in there?  It may contain paper recycling, but that's irrelevant as the whole skip will probably be put into landfill, as again, it is 'contaminated'. 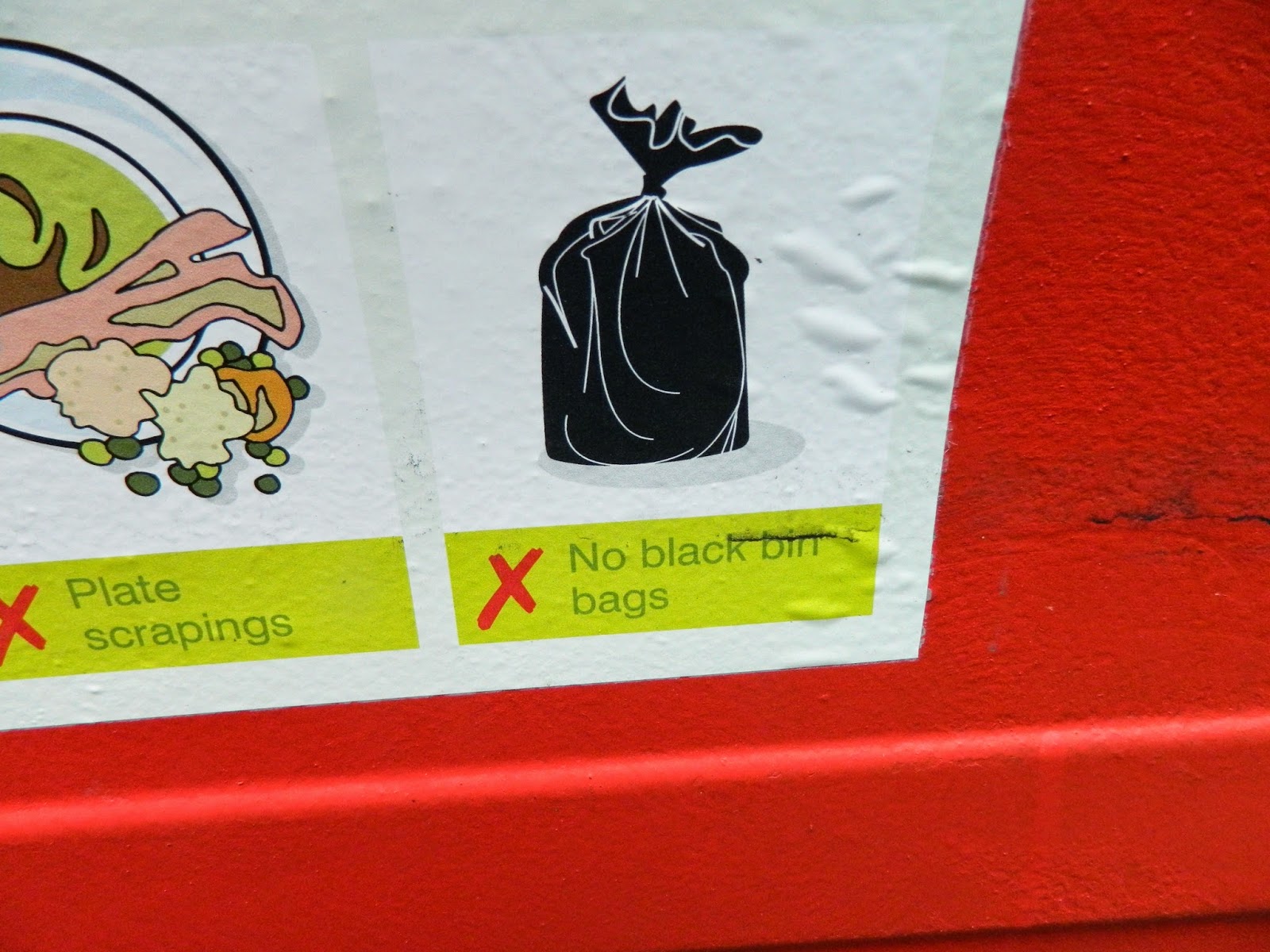 There's even a sign on the side of the wheely bin,
for those who haven't grasped the concept of recycling. 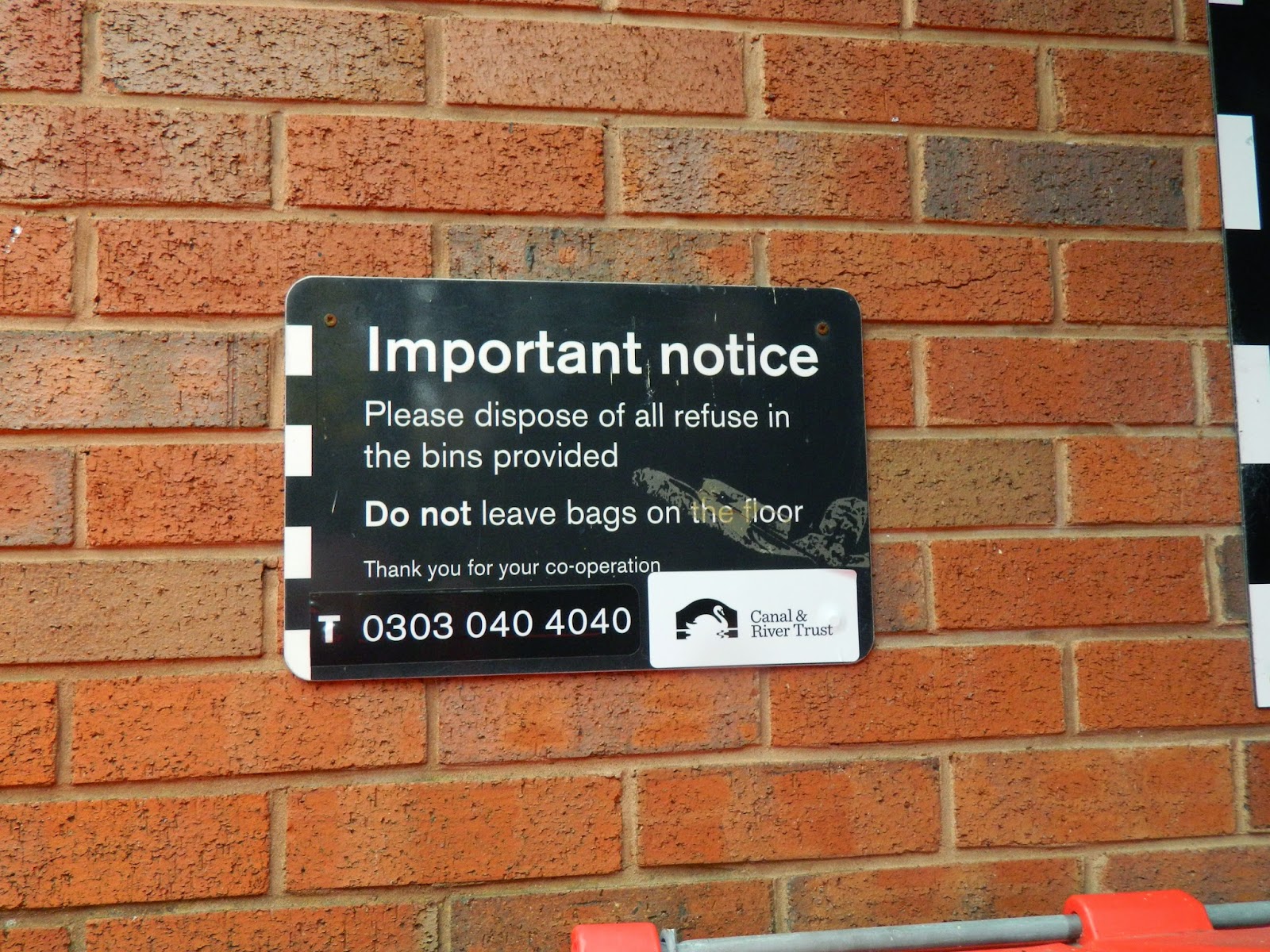 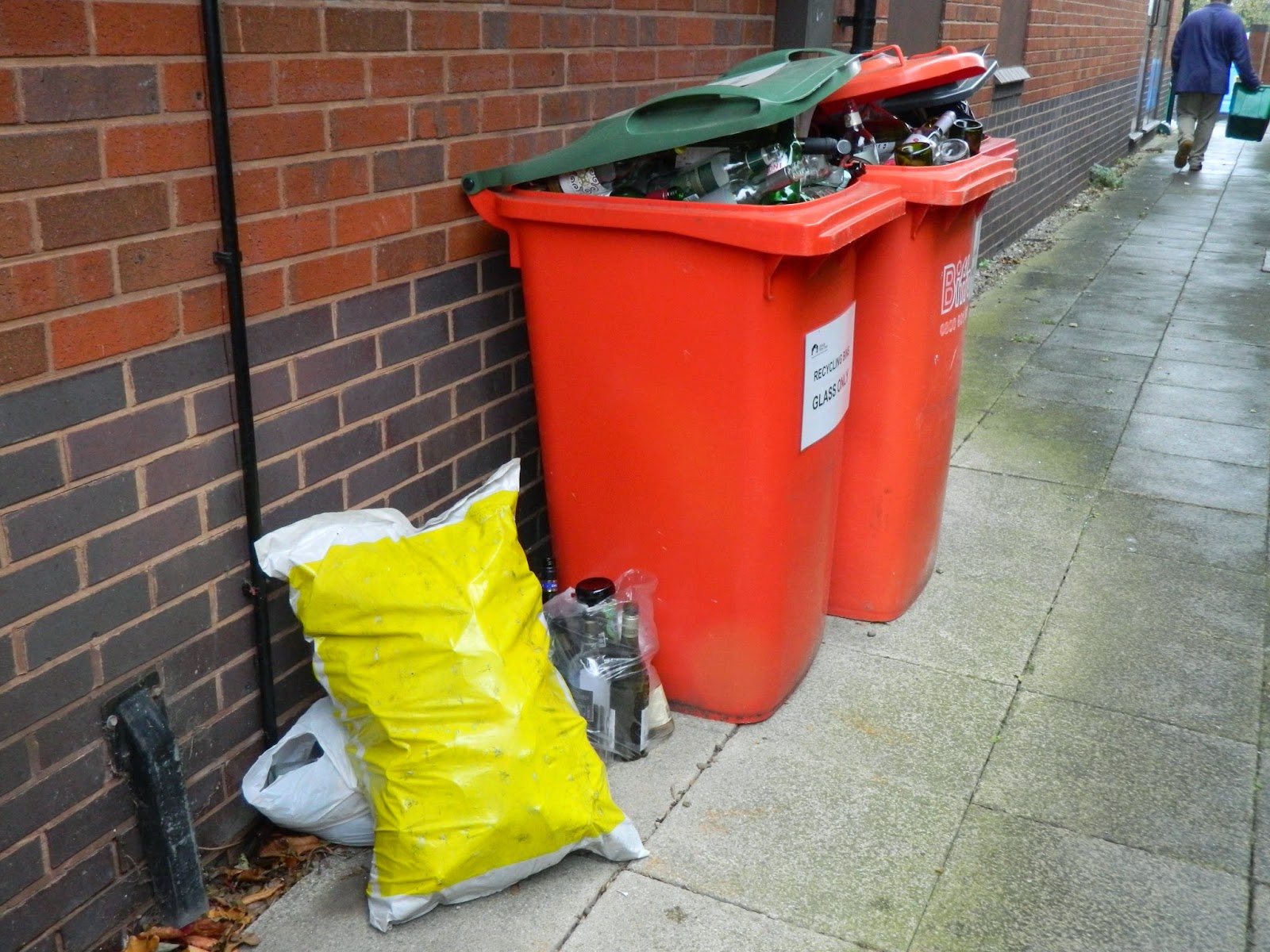 As for the state of the elsan point - disgusting!  There are some dirty boaters out there.
Again, Dave cleaned it, as he tends to do.  However, you do expect the elsan point at the CRT offices to be a bit cleaner than the norm.
So, for those of you who were thinking I've mellowed (significant birthday looming) with fluffy posts of boat rallies and birthdays - I haven't!  Rant over.
Posted by Sue Hunter at 18:19