When we arrived in Birmingham, by coincidence, it was the time of the Birmingham Beer Festival 2012, where there would be "over 220 real ales and over 60 real ciders/perries available".  Surprisingly - we didn't go!  We thought it a bit rude to drag my mum round a beer festival when she came to visit for a few days, and armed with the 'CAMRA Gude to 105 Real Ale Pubs In Birmingham', we thought we'd have more than enough beer and pubs to choose from.

We had only intended to stay in Birmingham for a couple of days, but as Nemo cat had the Fiddle & Bone derelict yard to roam around, we decided to hang around for a few more days, and meet up again with Frank & Gill (NB Fragil) who were on their way, who would also be hanging around Brum, waiting for the BNC Society Bonfire Night at Galton Bridge.  Poor Nemo, there were too many people and bikes zooming past & he didn't like it one bit.  Just as things would quieten down, you'd get a trip boat full of squeeling women going past, blowing their hooters as they passed (blow out plastic & paper ones, not the hooters on their faces).  Hard luck Nemo, so many pubs, but not enough time (or money!)

Dave was pleased to be back at The Wellington - please click here to view the bar if nothing else!
So many real ales to choose from, as you will see from clicking the link above.  This is the pub which doesn't serve food, but you are welcome to bring your own, and they privide plates, cutlery & condiments.  Just great.  We stumbled upon a new pub (to us) The Post Office Vaults, - a small doorway next to Greggs just a few yards from the Town Hall and 'the Bronze Man'.  Wow - a little hidden gem, concentrating on real ciders & perries, with real ale of course.  On our second visit, lo and behold - there's the landlord from the Wellington behind the bar!  Turns out, he's opened another pub on the same lines as the Wellington, but more ciders here than at the Welly.  Frank & Gill were impressed - Gill's partial to a nice cider, and so am I - there were even Welsh ciders on offer!  I felt like a 'proper' CAMRA member - drinking halves instead of pints!  Oooooo so much too choose from, I feel a drying out week coming on. 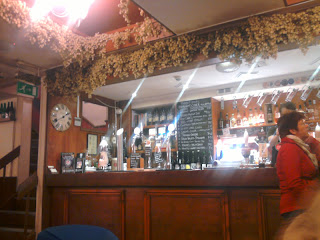 
Another pub I should give a mention to is The Prince of Wales, not far from the canal, behind The Malthouse, which has been reopened, and refurbished.  Very nice - and clean (which is important to us ladies when visiting the facilities).  We were sitting at a table having a pint of fine ale - as you do - when I looked up at the picture on the wall - it was a photograph of Chirk Aqueduct & Viaduct. 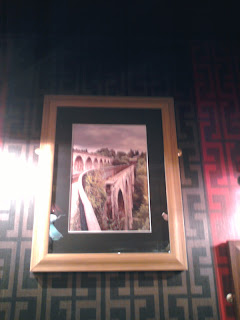 As we were leaving Brum, they were busy getting Chamberlain Square area ready for Christmas, with the siting of loads of Christmas trees.  The German Market is starting on 15th Novermber. 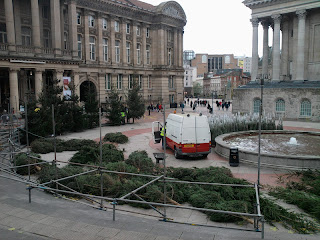 Oh, one thing I haven't mentioned is goat - yes goat.  We visited the Birmingham meat market a couple of times, and bought some goat, which makes excellent curry.  They sell every bit of meat you could think of, and some you wouldn't have dreamt of!  Which gives me an excuse to post the next photograph..... 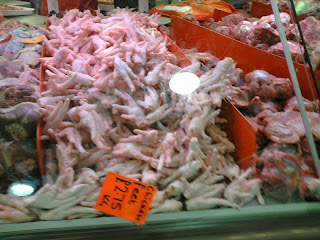 At the end of the week, we didn't get anywhere near visiting the 105 real ale pubs, which is just as well really, thinking ouf our livers.
This photo is for Hazel..... 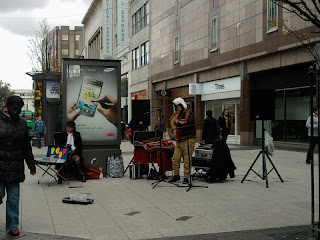 Wish we were there.