Blakemere to the Anchor

We had a night with our friend Bill at Colemere (A.K.A. Steam Boat Bill) who had made a 'lightning machine' Tesla coil, amazing - but very noisy.  We continued on our way the next morning feeling rather delicate after one too many bottles of the red stuff. 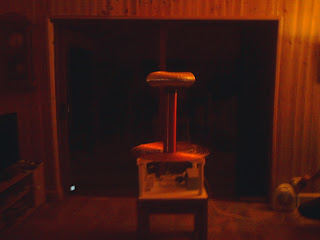 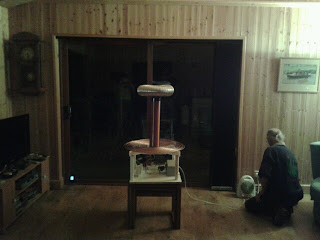 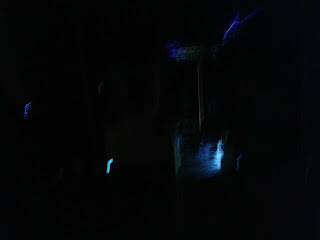 Lightning indoors!!!
For this next bit of the journey, it would help set the scene if you would hum the theme tune to the film "Jaws"  duh duh, duh duh, duh duh, duh duh, duh duh, duh duh dahhhh! "There's something in the water" AGHHHHH It's Jawcals (Jaws) the day boat from Trevor Basin, sneaking up on us round Bettisfield as we stopped for water!  There's no getting away from them.  The good news however, is that it's been sold, and Jack from Anglo Welsh is delivering it to Norbury Junction.  (As I write this blog, moored at The Anchor, Jawcals passes us again). 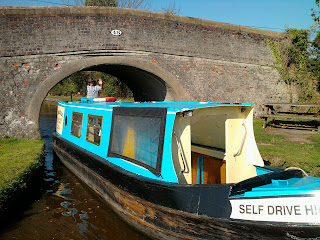 We caught up with Jack again at Grindley Brook where I helped him down the single locks, as we were in a queue to go down the staircase.  When I returned to the top Beefur was next in line (3rd) to go down.  "There's no one coming up" I said to the lockkeeper, "Is that a fact? No one's told me" very grumpily (you've probably worked it out that it wasn't Gary on duty that day).  "Yes, actually, it is a fact!" Dave explained to Mr. Grumpy that I'd been to the bottom of the locks to lock the day boat down & noted that there wasn't any one on their way up, & thought he might like to know, as the boats were stacking up at the top.  "Sue! sorry I didn't recognise you". I was only trying to be friendly to an ex-colleague, I shan't bother next time!

We thankfully got through the Wrenbury lift bridge without incident - unlike friends Ken & Denise a couple of weeks ago:  Denise operated the bridge & Ken went through without problem, but then the bridge would not go down.  The traffic was piling up, and tempers were fraying for the jammed motorists, who by now had started honking horns.  A farmer who was also in the queue, jumped out of his tractor with a large sledgehammer and started to walk towards the bridge.  "Its not my fault" shouted Denise at the farmer, whereupon he wacked the bridge with his sledgehammer, and it started to descend "That's got it, it's been playing up for weeks & BW were here to fix it this morning". 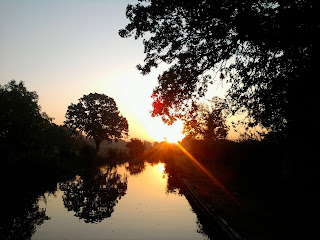 Fantastic sunrise near Wrenbury
From Wrenbury, we had a leisurely 30 mins walk to the Bhurtpore Inn.  A fantastic pub with 15 handpulls, extensive menu and great food. Well worth a detour from the canal. Beautiful old buildings here, this one states that it was built in 1667! 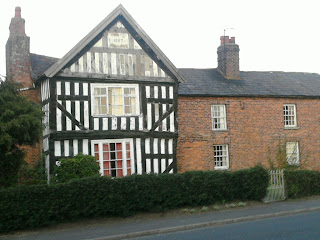 We don't think we've ever seen so many boats around at this time of year.  We've queued at nearly every lock.  Loads of boats at Coole Pilate, including blogger NB Armadillo, we exchanged pleasantries as we passed by & carried on our way. 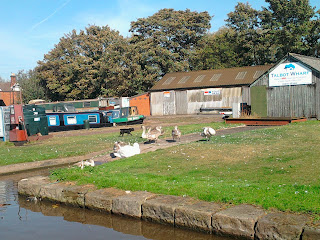 As we went through Market Drayton, this little black dog fancied his chances with 7 very large signets, mum and dad.  Needless to say, he backed off pretty quickly! 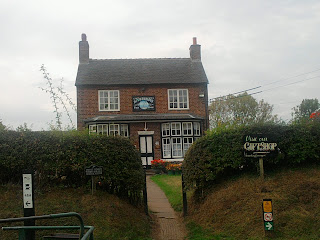 We continued our journey - no time for leisurely stops, as we had a rendevous at The Anchor, high Offley, with friends Mike & Hazel (NB Tess of Wooton), who were going to set up their tent there for the night.  We have never seen so many boats at The Anchor & the pub was heaving, stuffed to the gunnels with boaters and campers, with most tables outside occupied, which was a wonderful treat to be able to sit outside till late at this time of year.  There were plenty of musicians, and we had a fantastic night, and even stayed till after midnight - very unusual for us - we only do "early doors"!
Posted by Sue Hunter at 18:11