We had a rather unpleasant experience at Merry Hill the other night - the NB 'Alaska' decided to run his generator till 5 minutes to midnight.  This may be normal practice for him, but it annoys the hell out of us.  When Dave knocked on his boat at 10 past 10, and politely asked him "would he mind turning off the generator", he replied "when I'm ready, I'll turn it off".  Generator Man then said "you shoud try living on a boat mate"  - to Dave!!!  Dave then said "I do, and have done for 20 years", to which, Generator Man took exception & started ranting, so Dave just said "thank you very much, good night" and came inside.  G.M. then also disappeared back inside his boat.  Generator Man then emerged again at 1/4 to 12 and started chopping logs!  All the while ranting and shouting eff this and eff that, and "I'd have a go at you if you weren't an old man!" and "I can just cut your effing ropes".  He then turned off the generator at 5 to midnight & Dave opened the door to thank him.  This didn't go down very well & G.M. started ranting again.  Dave said "thank you, and good night", shut the door and left him effing outside.  After a few more minutes of shouting, he eventually went back inside his boat.  We awoke this morning still tied up in the same place, no ropes cut & no damage done, which was nice - but it does leave you with a bad taste in your mouth. 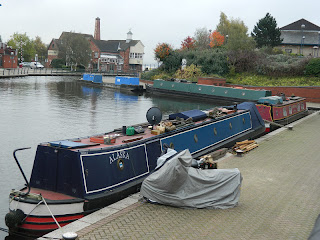 The amusing part of this is G.M.'s comment  "you should try living on a boat mate".  Dave's been living aboard for 20 years, and the boat we travelled here with - 37 years!!!!  So "mate", it's you who's the problem - not us.  Why can't you adopt at least some etiquette of canal living?  Fine - run your engine till midnight if you want to, but make sure you're well out of the way of anyone else, and not moor in a popular mooring site - like the middle of Merry Hill!

Incidentally, the only mooring available was next to this boat, surprise surprise, as there were boats moored here who've been here for weeks and weeks.  G.M. ran the generator from the back of the boat, so no doubt the noise didn't bother him up the front.
Posted by Sue Hunter at 09:52

Hi Sue & Dave,
I hope you have sent a copy of this blog to the CRT... he needs a visit from them to be reminded of the 8 til 8 rule as well as the long term mooring too!
Unfortunately some people have no consideration or manners.
Kevin

YOu should have call the feds and complained about threatening behavior.