A Visit to the Seaside: Porth Dinllaen (1 of 5)

We've been on our holidays to the seaside in Wild [north]  West Wales, to Porth Dinllaen on the Lleyn Peninsular, so over the next few days I'm going to bore you with LOTS of seaside pics.

We left the boat in Stourbridge, where we had a secure mooring for a couple of weeks behind the razor wire and locked gate, (where we'll stay, ready for Stourbridge Rally [please click here])  So after picking up a hire car, taking Nemo to his "Pet Resort" for the week, we set off.  We had, in previous years, holidayed in a cottage on the cliff above Aberdaron with Trevor & Carole (NB Strider), but after Trevor died 2 years ago, we didn't have the heart to go back there.  However after watching Timothy Spall's "Somewhere at Sea", when he anchored the Princess Matilda in a little cove on the Lleyn Peninsula and visited the remote pub "Ty Coch", Dave has wanted to visit it, so we found a holiday cottage built on the rocks overhanging the sea & dragged Carole and Peaches the dog along too.

The "beach house" itself when we arrived, was a bit of a shock to say the least. "Beach shed" more like it!  Their idea of clean falls way short of my interpretation of the word, and we spent the afternoon dusting, cleaning, hoovering, and washing crockery, cutlery, pans and dishes.  However the panoramic views from the balcony and lounge windows more than made up for it. 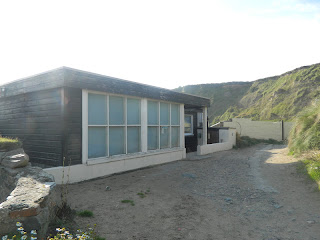 I thought this was the shed for the property next door - nope - it was our accommodation for the week! 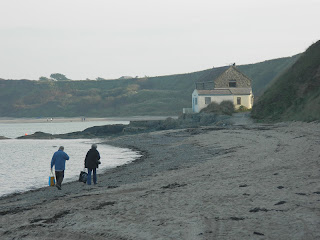 The brochure did say "vehicular access via the beach at low tide" but I didn't fancy taking a hire car accross this, so we trooped back and to accross the sand with our vast amounts of luggage.  Why do we always take so much stuff with us when we go on holiday?  The "house" is just around the corner from the one visible in the pic above.  The car was dumped in the car park above the pub about 1/4 mile away. 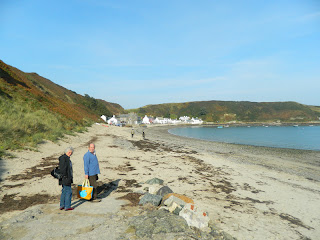 Looking back accross the beach towards Porth Dinllaen. 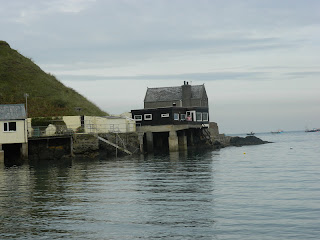 However, this is the "house" viewed from the back.  Not bad eh? 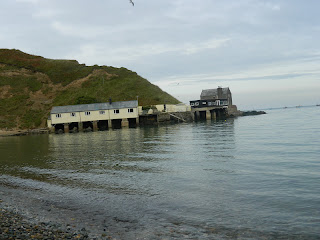 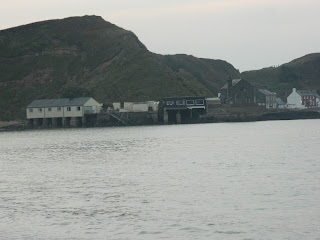 A stunning location, with the Ty Coch pub visible on the right, round the bay 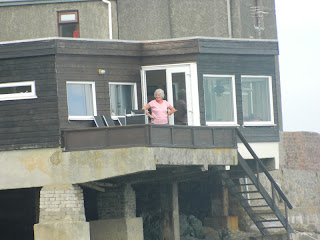 Carole, surveying the view from the balcony 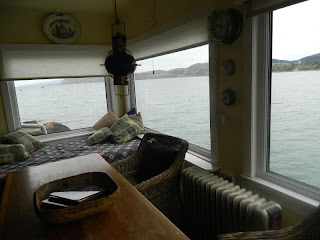 Panoramic views from inside, once we had rearranged the furniture a bit to be able to sit and just stare at the views, which we did, for days! 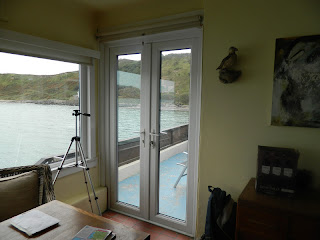 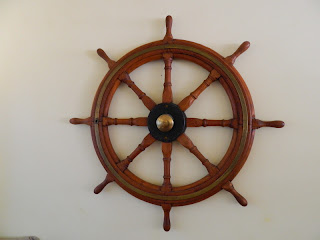 Some nice features inside..... 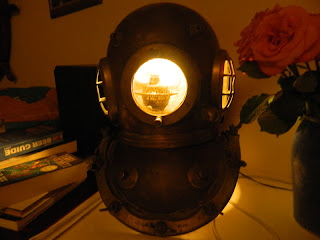 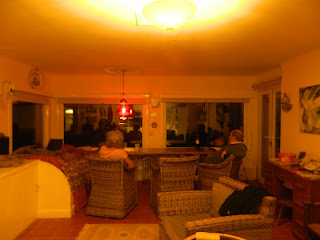 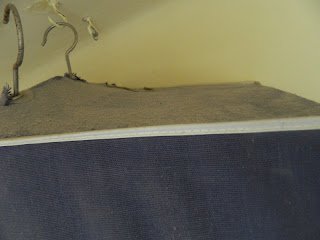 Back to the cleanliness bit - this is the top of what I assume is the wardrobe, years worth of dust and muck. 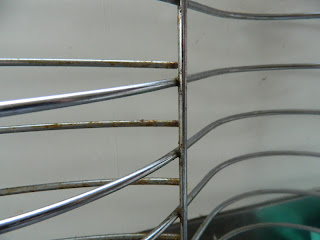 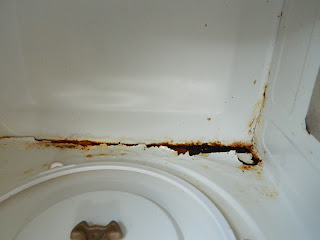 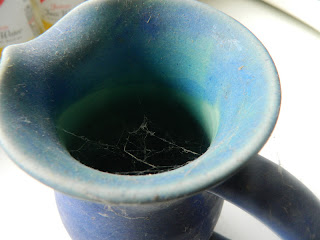 We won't be using this jug either 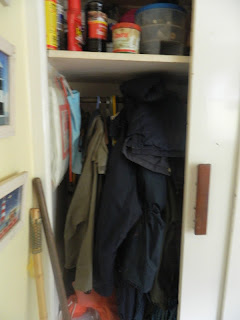 not alot of storage space, whenever we found a cupboard, it was jammed full of other people's stuff 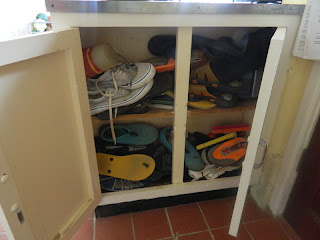 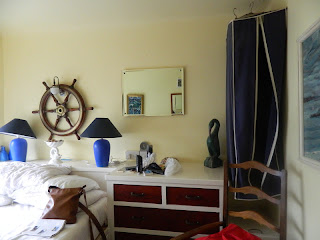 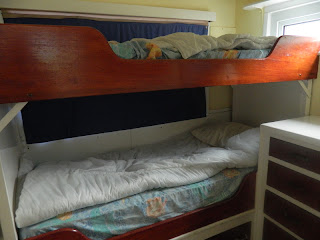 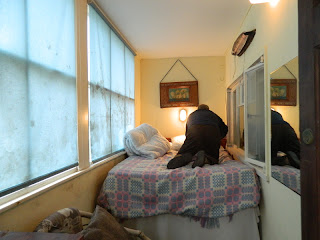 Bedroom three, with Dave's backside illustrating the scale of it - the bedroom - not Dave's backside!  The bed was 4ft 6, and the room was 4ft 7!  Described in the brochure as "attached extension with one double".  Dave is demonstrating how to turn on the light - by climbing over the bed.  Unfortunately, this annexe didn't come with a key to the outside door, so you had to climb through the window in the lounge area to get in.  Completely bizzare! 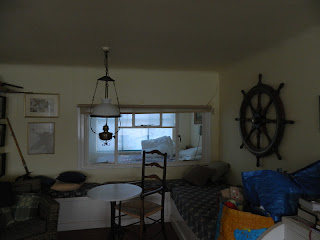 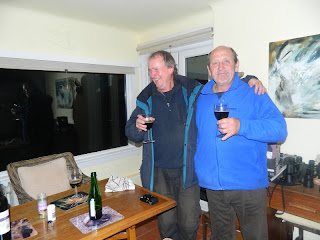 Anyway, despite the size issues of the bedrooms, the lounge & kitchen were fine.
We were joined on the first night by Dave's pal Mike from Llangollen (who incidentally, featured in a blog last year as the train driver in Banbury station, but that was another story).  Unfortunately,  the Ty Coch didn't open on Sunday nights, which was the main reason for Mike joining us in the first place.  Never mind, they did find a pub which was open just around the cove, so all was well.  Mike brought his home brew beer for us all to try, which we had with a huge roast dinner Carole & I had prepared.  Mike was so impressed with the place, that he immediately phoned his wife and said they had to book it for their own holiday!  Things didn't look half as bad after one of Mike's home brews! 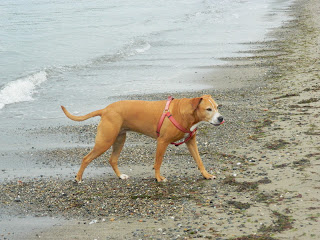 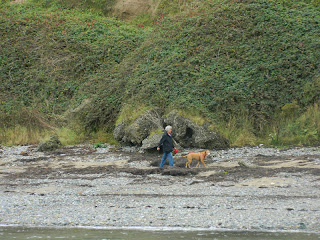 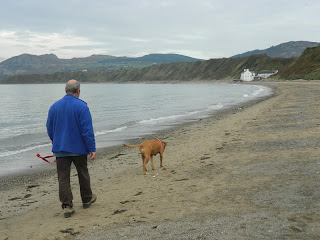 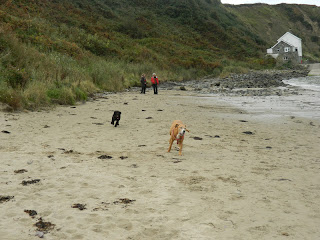 Peaches had lots of long walks along the beach, but unfortunately she found a very stinky rotting crab, which of course she ate, then kept Carole up all night wanting to go out with sickness & problems "the other end".