....... has published two letters, in reply to David Numpty's letter "Continuous resentment" printed in CB's May issue - one from Bruce Napier and one from G. Findlay.  I'm pleased that CB has chosen to print these letters in response to what was such a ridiculous proposal put by Mr Numpty, which also sparked a blogger war of words, which has been very unpleasant to say the least over the last few weeks.

On another matter, we have received our "Reminder to Renew Your Licence" - in duplicate.  Two separate envelopes have been delivered, each containing identical 4 pieces of paper, 6 sides of print, both dated 17th April 2012, both delivered 4th May 2012, (so sat on someone's desk for a couple of weeks), both costing 44p to post, and of course 2 separate A5 size envelopes.  Good job the licence fee has gone up by 6.4% then, to cover the extra administration costs. 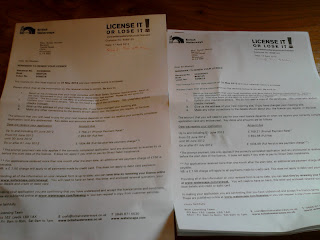 I have not read the original piece in Canal Boat, but like you I have seen the write-ups on blogs and I am also dismayed that it has developed into a war of words. But like you I am also pleased that CB has printed the letters in reply to the original piece. It is a free country and we are all allowed to pass our opinions, even if ours may differ from everyone elses.
Looks like someone was being over efficient on your behalf. All that paper and postage wasted.

Have a great weekend.

Thanks Jo. Enjoy the Monty! Sue

It's really interesting to read your story!