To there and back again

We've moved - 50 yards to the water point and back again!  We've been running the engine in gear for a few minutes each day, just to break up the ice around the boat and to give the ducks a chance.  There wasn't any ice under bridge 41, so backing up wasn't that bad till there,  the only problem was the ice the few yards between the bridge and the water point which was still solid, up to 5" in places.  After a few attempts of forward and reverse, and with Dave breaking the ice on the side with the pole, we managed to get in and attach ourselves to the one unfrozen tap.  I immediately jumped in the shower - and stayed there for quite some time.  Water tank now full.  Casettes empty.  Couple of clothes hand washes.  Job done! 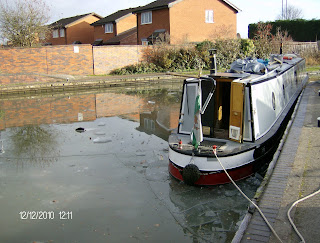 ﻿After spending time breaking ice, just to go a few yards, we've decided to stay put until either (a) the sun thaws all the ice, or (b) the sun thaws all the ice.  We were very pleased with our efforts and returned to 'our mooring'.  Ten minutes later, the boat infront of us was on the move, backwards to the water tap.  "Going to fill up with water" he said, "the ice seems to have melted and there's a path to the water point".  "Oh really!"  Obviously our ice crashing wasn't as loud as we thought.  We retired to the Market Tavern as we both smelled so sweet to discuss our next move - or non move.
Posted by Sue Hunter at 19:41

Stay put and enjoy the what the tavern offers!