New arrivals to the oasis in the ice

Woke up this morning to the ice creaking and breaking, there was no chance of the noise being a boat, it was 2 swans who had arrived to our little haven for the ducks where we had melted the ice around the boats.  They too were very grateful for a bit of water, they are so ungainly out of it. 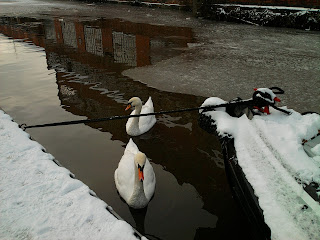 A single female tufted duck also turned up, but she proved a tricky little devil to get a photo of, either diving, or going into turbo drive at the sight of a camera, but eventually I managed it.. 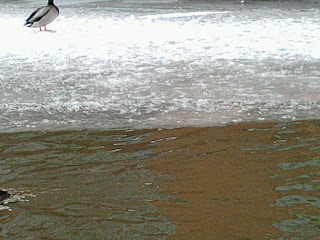 (tail end of a tufted duck) 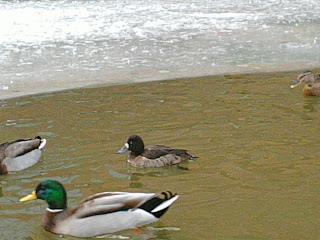 And this is Nemo cat, watching the ducks and swans through the drain holes in the front deck. 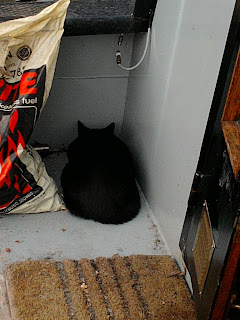 I've had my christmas haircut by the decendant of Hilda Baker, who talked about "audience survey maps" and criticised the airports for not having enough "avian fluid for de-icing aircraft".  I would have found it more funny if he stopped stabbing my ears with a comb - it's not as if they're in a different position on my head to everyone else.
Not long to wait for father christmas now, just been tracking his where abouts on noradsanta.org
He's actually in Denmark as I write this, but he's on his way....    I'm off now to start cooking the sprouts and get a hair dryer on the still frozen goose.  Good luck everyone with cooking the christmas dinner!
Posted by Sue Hunter at 23:01