How many people can you get on a day boat? 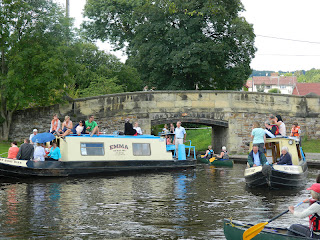 Yesterday (Sunday) a group had booked 3no day boats from Anglo Welsh at Trevor Basin, then initially went "up hill" towards Llangollen, then returned to Trevor Basin and continued accross the Pontcysyllte Aqueduct.  Here are the first two boats returning to Trevor Basin, dodging the canoes.  Here we have 12 on board "Emma", with 2 more people on the bank pulling bow and stern ropes, so that's 14 on the first boat. 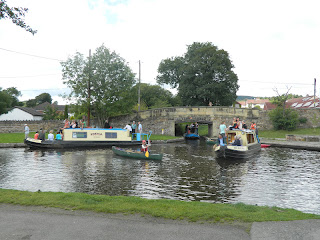 2nd into Trevor Basin was "Bella", with 12 on board 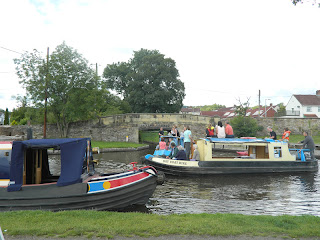 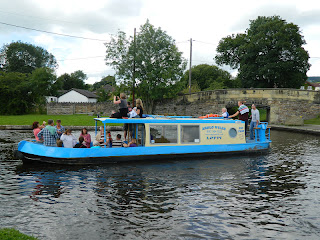 and finally "Lotty" with a staggering 20 people on board.  These boats were hired, as I said from Anglo Welsh at Trevor, which is just to the right of this picture.  The manager of AW saw the boats arriving, and quickly ducked inside his office, so nothing was said.  On the hand over documents, which are signed by the hirer, state that the maximum number of people allowed on each boat is 10.  The also have a safety briefing which clearly states "keep within the profile of the boat".  So here they all go accross the Aqueduct, with the majority of them sitting on the roof. 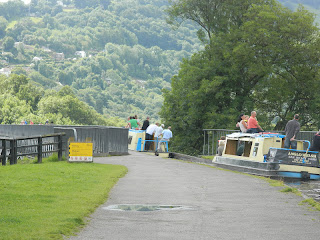 So much for Elfin Safety!

By the way, we are still here, despite not having blogged for quite a while due to work, cruising and the olympics.  Normal service will be resumed as soon as possible!
Posted by Sue Hunter at 15:20

That is totally disgraceful. The hire company should not duck their responsibility and should have said something. I dread to think of what could have happened if there had been an accident. Totally and utterly dreadful.

Thanks for the comments. Will get back into the habbit of blogging - starting now! I've done a bit of work for C & RT - more of that in my next blog.....

I hope you are going to send copies of your pictures and text to the Anglo Welsh head office and the Elf & Safetee lot at CRT too.

Seeing them on the roof while going over the aqueduct makes my blood run cold - horrible accident waiting to happen...

We live just down from the Poachers Pocket on the towpath side and see this regularly. We hear the shouts and screams and hear the bangs as they hit the narrow section and other boats on a regular basis!

My wife and i walk along the canal daily, and see this sort of thing regular. cant imagine what people must b thinking allowing ppl on the boat roof. cant believe it.