White out in Fron

What a difference a week makes.  We were sunbathing last week, after having a couple of meals on the O.C.F. (outdoor cooking facility).  Someone must have said the "B" word (barbeque) outloud, as the weather changed into this yesterday .... 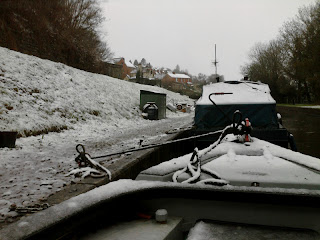 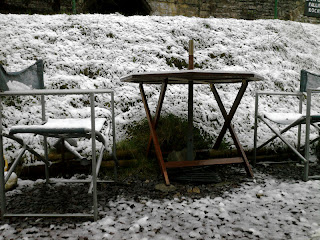 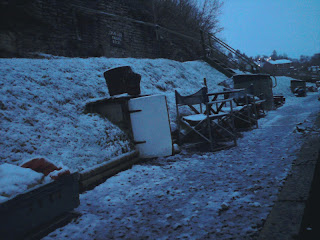 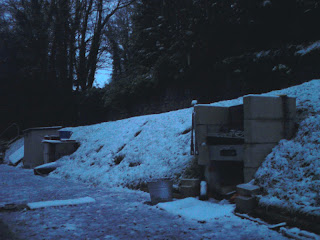 The above two pics were taken at 7.02am (phone camera on night mode), when it was blowing a hooley, snow was finding it's way into the boat through the back hatch, then dripping, drip drip drip drip, branches and twigs were hitting the roof as they were blown out of the trees in the blizzard. Then the first boat came past!!  I kid you not.  Of course it was a private boat, hanging on to the tiller with one hand, and his boater's hat with the other hand. It was at that point I gave up trying to get back to sleep, and got up. 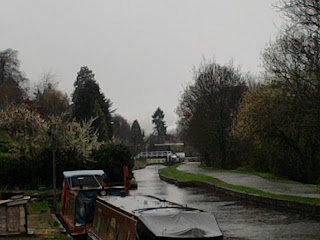 This is supposed to be of Dinas Bran in the snow, but it was that misty and wet, you could'nt make out where the snow capped mound was. 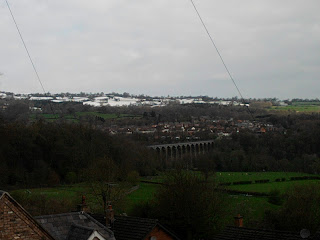 Most of the snow has gone today, just a bit left on the tops 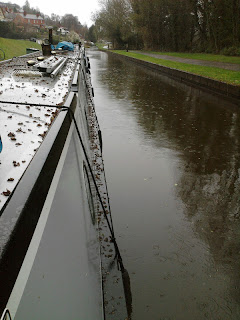 Unfortunately, the snow/wind/rain/blizzard brought down a load of debris from the ash trees, which now cover everything, including the roof of the boat.  The pollen has made marks on the paint - not good news for Hazel next door who has spent weeks - nay - months, scraping down, sanding, and painting the roof of their boat. 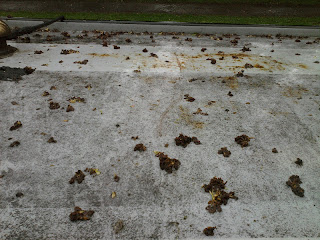 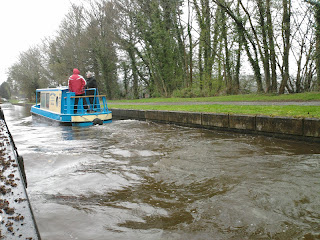 Easter is approaching, and the day boats (now 4 of them) are out and about.  This one was at full speed going past yesterday.  He did slow down after my second request - which wasn't as polite as the first request!  I have put the boat into summer 'crash' mode, and re-sited ornaments and glasses etc, so no damage done despite his waves.  Only hit once yesterday, and they apologised, so I don't mind that at all.  It's the ones who avoid eye contact after they've hit you that get my goat! 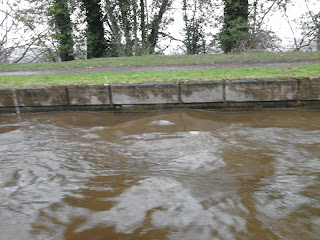 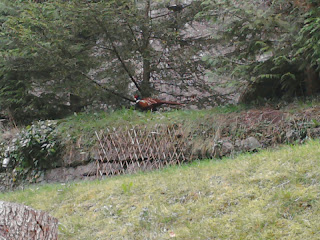 New addition to the bird feeding area;  This pheasant comes for his fill morning and evening.  Splendid colours at this time of year.  Glad Graham isn't around, or he'd be in a casserole before you can say Matilda Rose!
It is nice to be back.  We now have a new Tesco, opened in Cefn Mawr which is great for the area. Cefn has been on the decline for many years, and to have this facility nearby is wonderful.  However, I am always banging on about buying local produce, so this is exactly what I try and do when I can. So despite buying 'dry' goods in Tesco, I've been getting the meat and veg from Llangollen.  I ventured to Chirk on the bus today and went into the butchers there.  It's been years since I bought my meat there, as I seemed to be getting ripped off every time I went there.  So I gave them another chance and ended up with yesterday's bread and a small pork pie, when I paid for a big one.  Chops were OK though, but not as nice as Jones's.  Back to Llangollen for me then!
Posted by Sue Hunter at 19:37

That was surely a very abrupt change in the weather! Pays to always be ready. Too bad about the pollen making marks on the paint, that is really frustrating for Hazel.