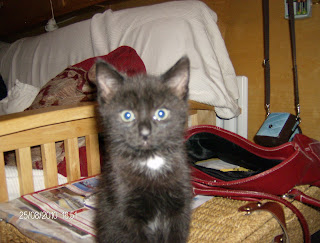 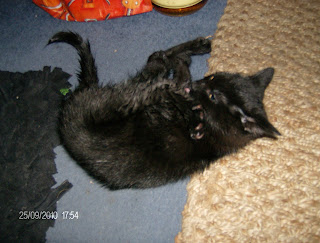 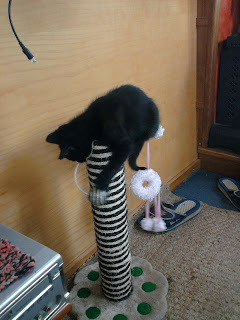 We have a new addition - Nemo cat.  He's now 3 months old and can be an absolute monster - don't let that cute face fool you.  Captain cat was killed on the A5 near our moorings in July & we were both heart broken.  She was such a clever cat, considering her life on a boat & out cruising for 5 months of each year, just brilliant - although intelligent near water, no match for the A5 on a Saturday morning.  So a replacement was sought immediately & hence (Captain) Nemo.  Unfortunately he does NOT live up to his name.  He's fallen in 4 times now - he's just the complete opposite to the eligant Captain cat.  He gets so excited when he goes outside, he jumps from land back onto the bow & straight off the other side - hopeless!   The photos are a couple of weeks old, apologies for that but we  have been lacking the technology, as mentioned above.  Pic 2 shows Nemo trying to clean himself after another swim.  Pic 3 is Nemo swinging from his scratch post (thank you again Aunty Gwyneth).  We've had no traumas with him today because he refused to go outside in the rain. Wus cat!  NB  Just read this out to Dave & he say's I'm being too hard on him - "give him time!"
Posted by Sue Hunter at 19:20