Blast from the past

On Wednesday a BW work boat came down Atherstone bottom lock & past us.  Great, an ice breaker!  So we quickly untied and followed him as he bounced off the sheets of ice towards Grendon road bridge.  After 3 attempts of him trying to get through the bridge and going every which way but straight, we decided perhaps it wasn't such a good idea after all, and retreated (backwards) to where we came from.  Incidentally, the BW blokes spoke to Matey on boat stuck at the bottom and said he was free to travel up the first few locks.  He still couldn't get all the way through due to works being carried out on the top locks, but at least he was nearer to the town, so off he went.

Thursday morning saw the ice on the canal all but defrosted, so after a Tesco delivery to Grendon wharf (yes Hazel - Ogio half price again!) we were a few inches deeper in the water, but were off!  We have a rendevous in the Dog and Doublet on Sunday with John and Mary from the Market Tavern.

We stopped for diesel at Alvecote, and blow me, Del Boy's car was parked in their car park - complete with "Trotter's Independent Trading Co" emblazoned on the side. 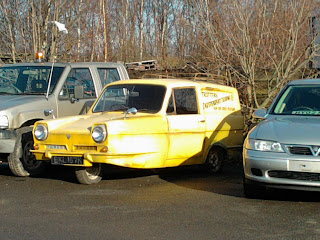 Just after Alvecote, we came across an obstacle in the water.  Is it a dead sheep? dead body? traffic cone? No, when we got closer we could see it was a space hopper, you know the ones - bright orange with ears for handles, with an sinister smiling teethy grin on the body of it.  I had one many years ago, and had to fight my sisters to get possession of it.  Talk about a couple of blasts of the 1970's!!! 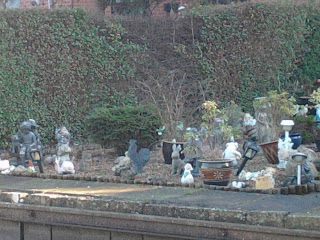 Now this is a busy garden - there's everything in here as well as the kitchen sink, which I suppose is used for a swimming pool for all the knomes.  And on to Fazeley ..... 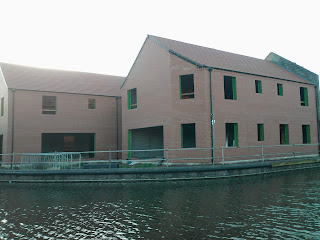 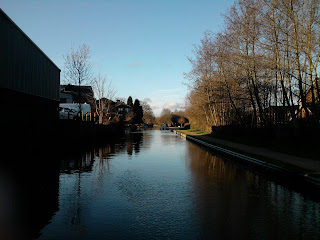 Where have all the boats gone??  Fazeley, like Grendon is bereft of boats, I've never seen it so quiet.
We stopped off at BW Fazeley to do the recycling before turning round and going up the Birmingham Fazeley canal.  Another rant about recycling coming :-  I lifted the lid of the glass recycling bin, only to find a black bin bag full of - glass!!  Duh.  So I duly emptied the bottles into the GLASS bin, and put the plastic in the PLASTIC bin.  Next to the paper recycling bin, yep you guessed it  - a black plastic bin bag full of .... PAPER!  So I emptied that out as well, which was full of BW's own bits of paper.  Yes, I did shout out loud, but I refuse to give up!!! 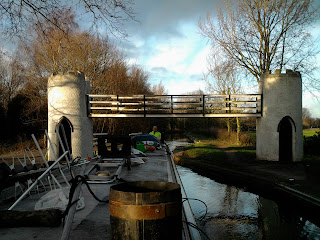 Passing through Drayton Manor fancy footbridge.  No queues for the fun/theme park today.  Moored near Kingsbury water park so we can have a look at the birds there, but the weather hasn't been that good.  Unfortunately Nemo has taken to running along the outside gunnel (water side), and like an accident waiting to happen - it did - and he duly fell in good style last night.  I heard the splash and quickly opened the side hatch, fished around in the dark and yanked him out.  How many lives as this cat got???  Note to self:  Buy more bath towels.
Posted by Sue Hunter at 19:25