We've just returned from a lovely couple of days at Blakemere - it seems that nature is reclaiming the mere, after an absence of wildlife over the last few years (apart from mallards).  We saw grebe, swans, canada geese with goslings, herons, oddly enough - an oyster catcher, and much to Dave's delight the first kingfisher of the year.  There was a noticable absence of fishermen - is this a coincidence ...... ?

The weather on sunday was fabulous, we were thankfully moored under the trees on the side of the mere.  Unfortunately the sun brings out the most inappropriate attire - shorts short enough to make one's eyes water - and that's the men who are old enough to know better, and very large women wearing not very much on top - and don't start me on the men wearing no shirts !!!

We passed a field full of lambs, which had been separated from their mums.  Lambs on one side of the canal and ewes on the other side.  All bleating at eachother - what a racket!  One lamb made a dive for his mum (the black one in the picture) but then couldnt get out of the canal on the other side.  It did eventually get itself out onto  the "lamb" side field with the help of me with the boat pole "persuading" it back to the correct bank, or put another way, poking it with a stick. 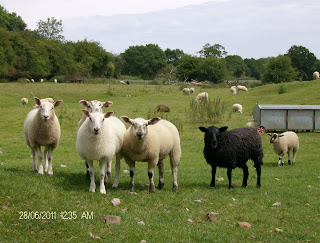 Lambs on one side of the canal 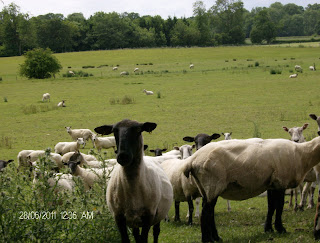 Ewes on the other.  That reminds me, must get mutton out of the freezer.
We were boat no.6 in the queue to come up the locks at New Marton, so I jumped off the boat with my windlass to help things along abit.  As I approached the lock, a woman who was shutting the top gate shouted at me "C'mon, hurry up, start winding".  "I'll wait until the steerer is ready" I replied & waited for the nod from the boat going down, then opened a paddle.  Organising woman trundles over to me - "which boat are you on?"  "The one at the back of the queue" I replied.  "Oh, sorry" she said, "I thought you were on a hire boat".  I shook my head and tutted at her & walked away, as it wasn't worth wasting my breath, she too was "helping" at the lock and had nothing to do with the boat going down - she too was waiting to come up.  This is what the hire boats have to put up with, this superiority complex.  By the way, there was also a bloke at the lock, locking boats up and down who was from a hire boat waiting to come up in the queue, he was getting stuck in & getting the queue down while the owners of the private boats waiting to come up, just sat on board and watched.  We did see some terrible examples of pushy private boats over the last few days.  There is definitely a  hierarchy involved - my boat is shinier than yours, so therefore I can push past you and tut tut at your inefficient driving methods.  Not so shiny boats can't shout at the shiny boats, so they have a go at the hire boats, and think its good sport to push past if anyone is aground or having trouble - so making the situation 10 times worse.      ﻿
Posted by Sue Hunter at 11:52