Due to the number of fallen trees, and broken branches resulting from the weight of the snow, the Llangollen Canal remains closed from BR19 near the Lion Quays all the way up to Llangollen apparently (as per CRT stoppage email).  We know there are trees & branches blocking the canal between the Pontcysyllte Aqueduct and the Lion Quays, due to first hand experience of our neighbours Rick & Hazel.  They needed a pump out, so decided to take a little cruise to Chirk Marina as they had a rare couple of days off together.  Dave hitched a lift with them by boat on Friday morning, as the roads were blocked due to the snow, (thus ensuring there was someone available to open up and do the pump out in case other marina staff couldn't get there due to the blocked roads.
So the three of them set off from the moorings for a picturesque potter, armed with a chain saw due to a large branch blocking the canal just past our moorings - which they cleared with ease.  Unfortunately, when they got to Chirk Marina there was no power - so no pump out.  Not a problem, (they thought) and they continued on to the Lion Quays with the intention of returning to Chirk for said pump out the following day. Another bit of bad luck - the Lion Quays had no real ale on.  On Saturday morning they set off from LQ's to get that pump out, unfortunately there was a rather large tree blocking the canal at Chirk Bank.  They then moored the boat there, and started to walk back to the moorings to retrieve their landrover - a manual pump out was on the cards.  So they walked the 4 miles back to the moorings in two foot of snow, taking these photos on the way.... 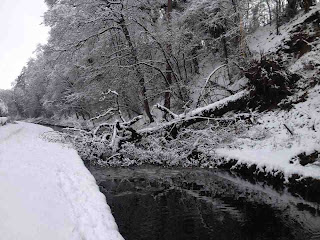 Fallen tree on the Chirk Bank side just after Chirk Aqueduct 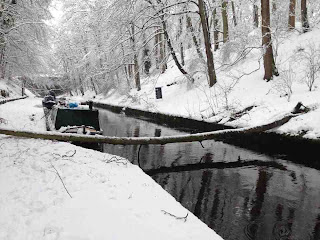 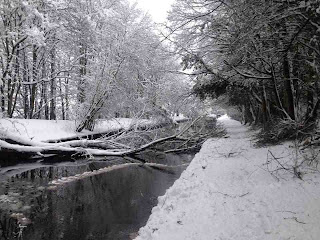 Another one along Chirk cutting 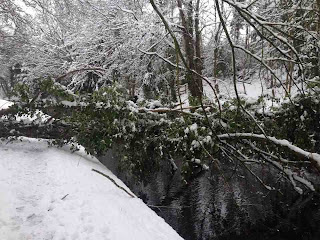 Between Irish Bridge and Glen Coed (I think)
They dug out the landrover, collected water containers, more wood from their wood store, and bits & bobs which were left behind, as they only intended to be out for a couple of days.  As they were blocked in Chirk Bank, they decided to reverse back to the Poachers Pocket - at least they would have a pub to go to.  Plan C was executed, and they moored up at the PP - only to discover that it wasn't due to reopen to the public after the refurbishment until Monday evening.  It was open to Marson's employees only, for staff training purposes.  Plan D:  turned at PP and started off to Lion Quays again, where they happened to be members of the Spa, so could at least use their 'facilities'.  Scuppered again - by another fallen tree at BR18.  So reversed back to the Poachers, where they remain - with tanks full and empty, but not in the correct order!  At least they now have a phone signal. (we haven't had "3" or Orange/TMobile for a few days).  Chin up guys - the Poacher's reopens tomorrow night - I just hope their real ale selection has improved with the refurb!

After reading NB Bendigedig's blog, Elsie writes that the top end of the Llangollen is also blocked due to the number of fallen trees - but I don't know exactly where they are.
Posted by Sue Hunter at 19:36

That's not a bit of bad luck, that's a crisis - about the real ale I mean. Beautiful photos and, I suspect, a beautiful log store for your use next year.

PS,I think this is the first winter we haven't bumped into you in about 4 years

I've only managed to walk from Llangollen towards the lift bridge by the sheep field. The narrows section just before Llangollen is blocked by fallen trees and branches as well as the those fallen alongside the boats on the winter moorings......nobody can move so it's very quiet!