We're back - after the blogspot mysteriously disappeared for a few days - "Account removed" for no reason whatsoever.  After asking Google to explain why this had happened, it reappeared, with an email apology.  We still don't know what happened, or why, but it all seems to be working again (touch wood).

After catching up with Gill & Graham on Matilda Rose, we decended the Lapworth flight in fantastic weather.  After a brief pit-stop at Kingswood Junction to use the BW recycling facility, (which, incidentally - someone had again dumped their rubbish bags into the recycling ggrrrrr),  we turned off the Stratford Canal, and onto the Grand Union. 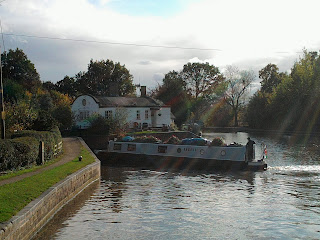 Left turn Clyde
We decided to stop at Tom O'The Woods - purely as a fact finding mission of course - to see that now it has re-opened, it was better than the last time we stopped here, thankfully it was. 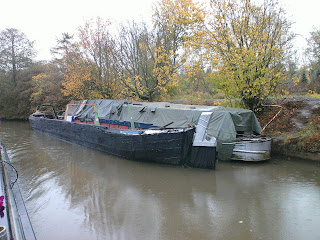 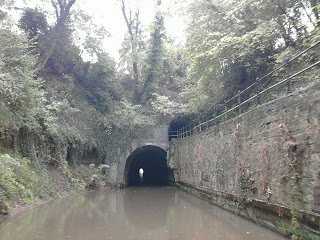 Shrewley tunnel, with horse tunnel to the right.
We moved on to Hatton, so we could celebrate Dave's 19th anniversary of living afloat and had a meal in the Waterman.  Very nice, with good beer.  The first day of Dave's life afloat back in October 1992, was spent breaking ice on the Leicester branch of the Grand Union, so we can't really moan about the weather - YET! 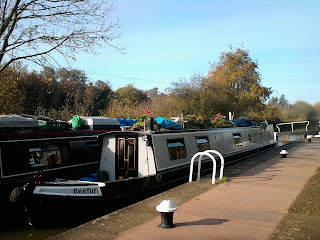 Another glorious day spent decending the Hatton flight, with Beefur & Matilda Rose strapped together, but steering like a brick.  I was nomiated driver for the day & this is the only photo I took as I was too busy clenching the tiller and concentrating!
Gill took some lovely photos though (CLICK HERE)
Down, down, down to Warwick & Leamington Spa where we only stopped to do a Tesco shop & didn't do any exploring this time, as we've been there many times before, both by boat, and from visiting Rachel in Kenilworth up the road. 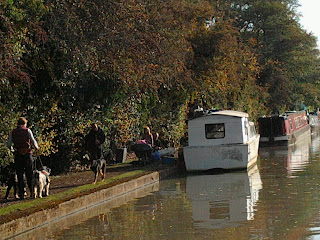 The towpath had been taken over at this point, with Gill having to pick her way through the kids, wheelbarrows of wood, and three legged dogs (yes really).  This is the spot near Radford Semele that we found all that wood last year, a 'community' has now grown around it! 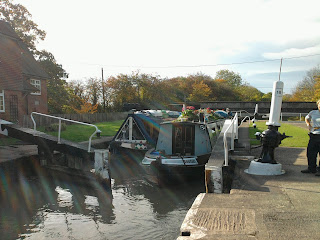 Then it's up, up, up again towards Long Itchington.  Oh, by the way, if you need to use the elsan point at Fosse Wharf - dont!  It was absolutely disgusting. It doesn't have a BW lock and is open for all and sundry to use.  If the Environmental Health bods saw the state of it - they'd close it down.  Dave said he would have cleaned it if we had a couple of hours to spare, as it is a facility we need to keep.
Posted by Sue Hunter at 16:16