Out of Brum & on to Stratford-On-Avon Canal

After doing the necessary at the BW point at Cambrian Wharf, (that's filling and emptying) we were on our way.  Through the middle of Birmingham City Centre, through Gas Street Basin and the lovely old working boats, under Broad Street and a sharp right turn at The Cube.  We passed Barrie Johnson NB White Locks of the BCNS, who had also been at the Stourbridge Rally.  Which reminds me:- Dave bumped into John Dunn off NB Druid in the middle of the Bull Ring Market the other day.  He wasn't at the Stourbridge Rally this year, or last year, and people were getting quite concerned about him.  His boat is now moored at Dadford's on the Delph.  He is no longer on the water and the boat has been passed to "a member of the family".  So, after much speculation - he is alive! - but not that well, arthritis having caught up with him & he can't do single handed boating any more.  Can still talk for England tho!

We've cooked our cheap chicken, bought with a fight from the indoor market on Saturday. I've never been shouted at by a butcher before for not buying his meat. It was a real eye opener. I didn't understand why customers for each meat stand were congregating at one end of each counter, until the butcher stall holder started bellowing "LISTEN! £10 FOR THIS TRAY". It slowly dawned on us that as it was 4pm on a Saturday, the butchers were selling their stock off cheaply. Talk about country bumpkins in the city! We stood our ground and said meekly "but we only want £5 worth, very sorry but we havent got the room for all that chicken". Loud Butcher shouted at us some more, but then gave us half a tray worth, for £5. We then ran away, leaving the masses glued to the display cabinets of the meat counters, ready to pounce on their bargains.   That's our city visiting done for another year! 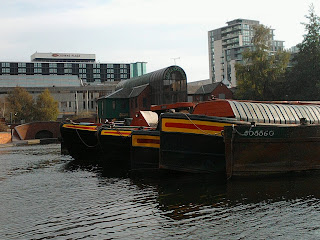 The debris/litter from the Great Birmingham Run the day before was still in evidence, despite the litter pickers from Brindley Place.  We encountered a few silver 'blankets' in the canal and lots of discarded plastic water bottles.  Shame about the competitors making such a mess around the place - after running for such noble causes. Brindley Place was quite a different scene this Monday morning - all black suits and briefcases - rather than the lycra clad mobs of yesterday. 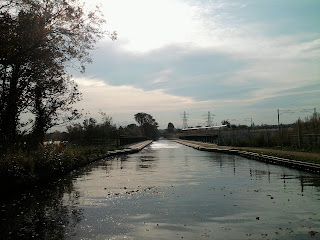 New Aqueduct and new overpass - though the grafitti artists have found a lovely new surface to deface.... 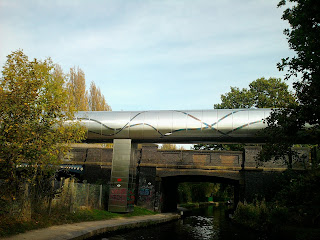 Onto the Stratford on Avon Canal, and past that strange place that is Dickens Heath.  A huge conglomeration of flats and houses in the middle of nowhere! 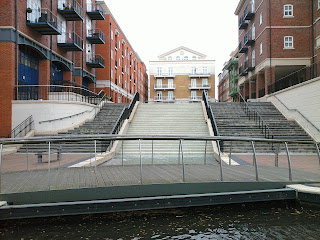 We've caught up with NB Matilta Rose, strangely enough at the Blue Bell Cider House, and we may or may not be moving on tomorrow - depending on the weather.
Posted by Sue Hunter at 00:08