Well, that's Stourbridge done for another year.  The weather over the weekend was fantastic, which brought the crowds out - not so many boats this year - only 58.  Never mind, next year is the Staffs & Worcs 50th anniversary for The Battle of Stourbridge  so hopefully, the number of boats attending the rally will be over the 100 mark.  Dave will miss visiting his favourite pub (The Royal Exchange on Enville Street)  He'll probably have to wait another 12 months for his next pint of Bathams!
We met up with lots of friends over the weekend - and made some new ones too.  But time to move on and start cruising - now i've (finally) picked up my new glasses from Specsavers.  They look like and feel like safety visors.  I'm sure they're not the ones I picked! 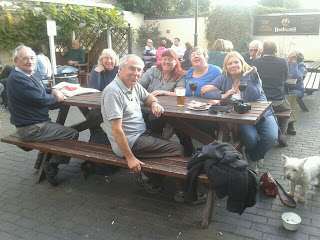 Here we are at the Exchange on a lovely sunny afternoon:  Frank & Gill (NB Fragil), Me, Ken & Judy (NB Flying Fox) & Sandra (NB Iapetus) & Ken & Judy's dog - who's name I can't remember I'm afraid.  Ken, Judy, Sandra & Brian (not in picture) have just returned from 2 weeks on the Caledonian Canal - they hired a boat & didn't take their own!  They managed to pick the 2 weeks in September when the sun came out for their trip, and highly recommended it.  Oh - and that's the BCN committee having a meeting on the table behind us (they weren't there just for the beer)

We've been having trouble with our power over the last few weeks.  We thought it was the inverter, so changed the fan, which made things worse and it packed up, so we bought a new 1800w inverter.  We still have problems, so it wasn't the inverter after all.  Which left batteries or fridge - either way it was going to cost money.  After testing and re-testing, isolating, & recharging, we have discovered it's the batteries - initially ruled out as 3 of them are less than 2 years old.  So it's 4 new batteries, which we are hoping will be delivered tomorrow (Wed), fingers crossed as we want to get into Birmingham on Thursday so I can go home & visit mum for a few days.  This will leave Dave free to visit is 2nd favourite pub - The Wellington, which i've raved about before.   16 hand pull ales plus more for cider.  No food served, but if you'd like to bring your own in, they will provide knives, forks, plates and condiments, and clear away afterwards - how good is that!  Unfortunately we're a week too early for the Birmingham Beer Festival from 27th - 29th October, but depending on where we are, we'll try and get back by bus (cat permitting).

Whilst waiting for this to upload, Nemo cat has taken another dive into the canal.  He's been dodging bikes at 40mph on the towpath, drunks, dogs and hoards of people whilst moored at Stourbridge.  We get into the countryside & he takes a dive off the wrong side of the boat.  We've been moored right side to towpath for almost 2 weeks now & he still jumped off the wrong side.  As I've said before.. not the brightest button on your shirt that cat.....
Posted by Sue Hunter at 22:46