Since the last blog, I've taken a chill pill, and sat in a darkened room listening to Pink Floyd and keep repeating the mantra "only two busy weeks to go", which has helped with keeping calm with speeding boats - that and going out for the day on Tuesdays and Wednesdays.  I didn't leave early enough yesterday, and was hit twice before 9.30am, the second boat, when I opened the front doors & gestured "what are you doing?" replied "well I'm sorry dear, but it was only a small bump" - oh, well that's all right then! 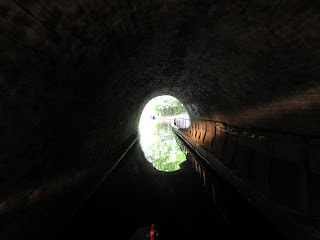 There's light at the end of the tunnel!
The day boats continue to speed past, with the occupants usually dressed as pirates - what on earth that's got to do with the canals - I don't know.  One day last week, Jack from Anglo Welsh had to retrieve one of them from below New Martin locks (the day boat - not a pirate), as they just kept going - then realised that they'd gone too far.  Anglo Welsh then had to then go & pick up the passengers to return them to their car at Trevor Basin, and it was left to Jack to return the boat - after having winded.  It was 9.30pm, in the dark, when he came passed us, so his working day would finish at around 10pm.  I hope they lost their deposit. 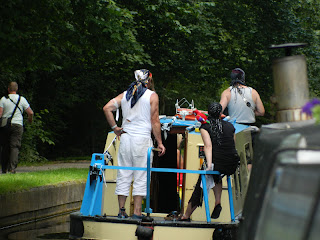 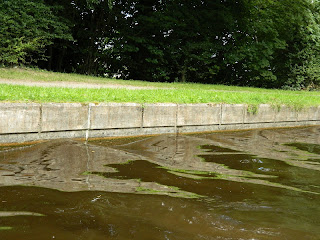 I was contacted by my old boss at C & RT a couple of weeks ago, who asked if I would be interested in working at Llangollen for a week or so, collecting the mooring fees in Llangollen basin, covering for Mike who was on holiday, which I did, and thoroughly enjoyed.  Until the last day that is, when a particularly aggressive boater (NB  Vadere II) decided he didn't like the colour of my uniform, and proceeded to rant at me for a good 30 minutes about the state of the canals, CRT management, not having a second elsan point in Llangollen, no disabled moorings for disabled boaters, the price of fish, and anything else he could think of.  After 20 minutes or so of shouting at me (I had given up trying to reply to his ranting), he asked me "what influence did I have on C & RT policy"!!!  Look pal - in case you hadn't noticed - I'm a temporary operative - you can't get lower than me in the food chain of CRT!  I politely replied "none what so ever".  This was then followed by him preaching for another 10 minutes.  His biggest gripe was that as he was moored in the basin, he was too far away from the elsan point for him to cart his loos.  I pointed out that he was welcome to moor right outside the elsan point on the linear moorings, but this seemed too confusing for him.  Eventually, he left when I asked him what exactly it was that he wanted me to do to help him - he didn't have an answer!  He left armed with telephone numbers which I'd passed on to him, of people who might be able to discuss matters fully with him, such as Northwich Office, Robin Evans, John West etc.  The following day I was working in my usual job for Wrexham Borough Council in the Information Centre in Trevor Basin and who should appear, but Mr. Angry Boater - looking for an elsan point as he had declined to use the facilities in Llangollen.  I politely said he would have to go back to Llangollen or on to Chirk Marina as there was no elsan point in Trevor (ha!)  He looked puzzled at me "have we met"  "oh yes" said I "I won't be forgetting you in a hurry". It then dawned on him, and he sloped off.  It's such a shame that some people take the view that because you're wearing a CRT uniform, that they have the right to be insulting and aggressive towards you.  I found myself  being excruciatingly patient with this particular a***hole, just because I was wearing the uniform.  Had it been a meeting in a pub, then conversation would have been completely different - but of course he/they realise that - that's why they feel then can speak to you as they do.

Oh, and I had the usual couple of boats, who concoct a fabulous story in order to get a few more days mooring at Llangollen basin (it's 48hrs max).  This couple of boats were travelling together, and told me that they had already spoken to the moorings officer and he had agreed that it was ok for them to stay 3 more days.  3!!!! I don't think so!  So when I spoke to the moorings officer to check, he confirmed that he had NOT spoken to anyone, as he was on holiday!  Nice try.  Not my problem though - I left that one for the regular CRT man who was coming back on duty the following day.
Posted by Sue Hunter at 11:43