Very Busy Llangollen Canal - It must be August!

It's rather busy up here this week - to say the least.  As in previous years, Tuesdays and Wednesdays are the busiest days, which some have called 'manic' and others, just 'ridiculous' with 12 boats waiting to go through Whitehurst Tunnel at one point yesterday - with no one giving way at the other end - nor with any one with the sense to just walk through the tunnel and stop them coming through.  You then end up with a massive convoy causing disruption in both directions, with boats travelling too close behind one another.  Why some in these convoys just don't moor up for 10 mins and have a cuppa is beyond me, if they did, they'd have the canal to themselves again, and not end up tailgaiting. 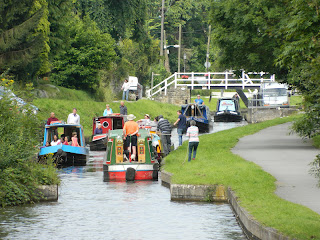 On Tuesday we counted how many boats passed us throughout the day (yes, I know we should get out more, but we were both off, and wanted to watch the Olympics).  Result - 96 boat movements past us.  Not quite hitting the hundred mark, but not that far off either.  Unfortunately 75% of these boats went past at quite a speed.  I politely asked a particularly fast boat (Snowmane, hired from Chas Harderns) "please will you slow down a little bit", but the 4 on the back of the boat just laughed and sped up.  Thanks pal. 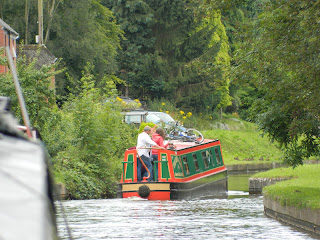 There he goes, he had slowed down at this point as the canal narrows, so unfortunately he missed bumping into the concrete sides.  On Wednesday afternoon, whilst minding my own business aboard Beefur, all of a sudden a boat approaching me suddenly sped up to full throttle and went past at full tilt. Yep - it was Knob 'Ed from yesterday.  I stuck my head out of the window and asked if all the speed was for my benefit, to which they just laughed and roared on past the line of moored boats.  Now we put up with alot of knocks, bumps and fast boats at the top end of the Llangollen, but to purposely be so vindictive is just not in the spirit of boating.  Yes, I did complain to Chas Harderns for all the good it would do.  And before the rope tying police start leaving comments, yes - we are securely tied thank you.  Dai next door has resorted to a truck tensioning line, as well as ropes, but he still gets rocked around.  Mind you he has an antedote to the speeders - he feels the wave coming, quickly starts his Lister HA2, then as the boat approaches, puts Fern in gear & the approaching boat is then catapulted into the concrete side opposite with the force of the 28" prop.  (Fern is a 70ft ex FMC boat).  That usually slows 'em down. 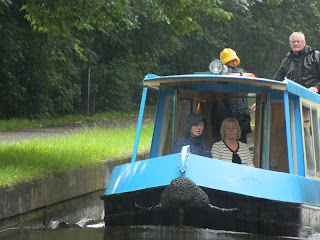 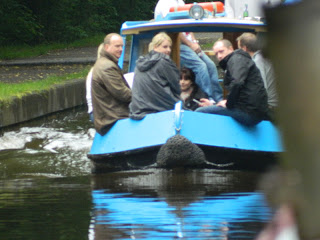 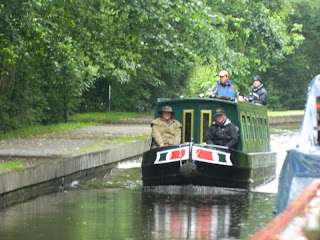 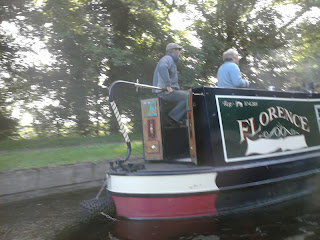 After another busy day yesterday, with boats bumping into you without an apology, and boats speeding past, I just felt like untying the ropes and going - until something like this happens ..... 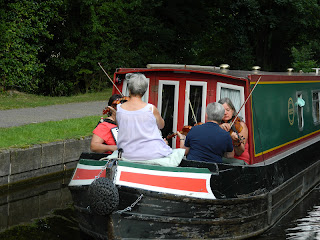 The sun comes out, and a boat load of Sweedish women come past (on tickover), happily playing their rendition of The Irish Rover... 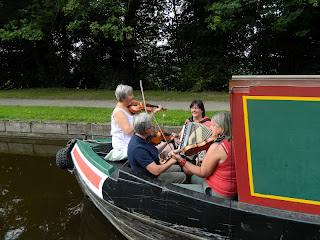 Hazel & I both applauded and thanked them very much.
Then my lovely husband appears with a huge fresh trout for the O.C.F. (Outdoor Cooking Facility - don't mention the "B" word or it'll rain) 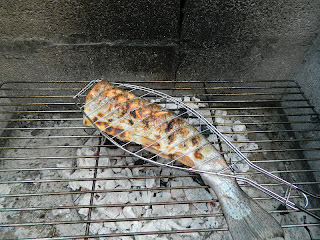 and we share the company of our lovely friends (company - not the trout!) 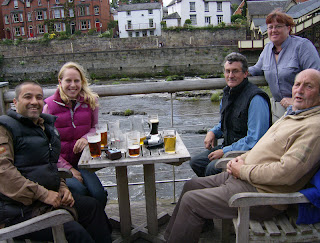 Speeding boats become insignificant with a glass of pinot grigio, sitting in the sunshine on our lovely mooring, maps out looking at different canals and planning this winter's jaunt, and you remember what it's all about......  Iechyd da!
Posted by Sue Hunter at 16:39