We've had a few Canal & River Trust  "face-to-face fundraisers" operating in Trevor Basin over the last few weeks.  Chuggers is the name which has been given in the press to fundraisers (usually a private contractor) working on behalf of a charity in order to obtain support/donations.  When the first bloke arrived and pitched up, I asked him "as you are wearing the CRT uniform, are you an employee of CRT?"  He avoided answering the question, twice.  So I assume that the answer was "no".  He was a nice enough bloke, but didn't know enough about the area in which he was operating.  He had pitched up outside the information centre with a CRT uniform on, and was intercepting visitors to the TIC, who had genuine questions to ask about the Pontcysyllte aqueduct, which he could not answer, but changed the subject to talk about the Caen Hill flight of locks (in Wiltshire).  This really confused the tourists, who were then looking around for said locks.  He kept joking that he couldn't answer the questions asked of him -  Beccy & I kept pleading with him to direct the enquiring tourists to the tourist information centre - that's why we're here!  It didn't help when people looking for Jones the Boat [trips] were directed accross the footbridge to Anglo Welsh. 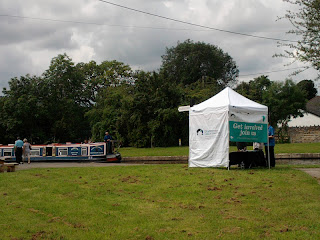 Last Sunday was a particularly busy lunchtime at Trevor Basin.  I counted 15 boats at one time all trying to manoeuvre around the junction to Llangollen. Boats were stacked up waiting to come through BR31 from Llangollen, so those coming accross the Aqueduct from Fron couldn't turn up towards Llan. The route through to the end of the basin was blocked with boats waiting at Trevor to go accross the aqueduct towards Fron. Eventually, one of the crew of the boat which had been there the longest, went over to the other side of the Aqueduct and asked the boats to stop coming accross, as there just wasn't any room. 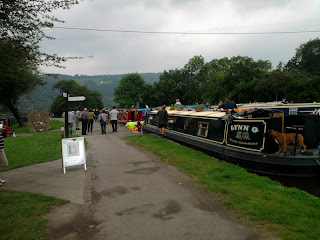 Unfortunately, this request was ignored by "Jones the [trip] Boat", who then blocked the aqueduct.  The boats behind the trip boat had heeded the warning, and had now stopped on the Fron side of the aqueduct.  Too late.  Jones the Boat, who was now stuck on the aqueduct with nowhere to go, then jumped off his boat and started to shout instructions to all the boats confined to the junction.  As you can imagine, the waiting boaters were not exactly amused by this, especially as he had been asked not to proceed accross the aqueduct, and an argument ensued.  I must say that despite all the shouting, nobody swore, which was nice. Probably due to the crowd of what must have been 100 people, now gathered watching with interest.  The worst insult was "idiotic muppet" - directed at Jones the Boat. 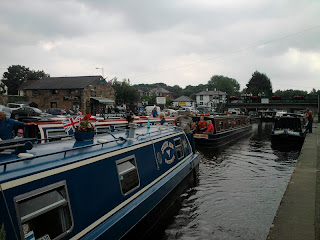 Eventually, with alot of bumping and scraping, boats began to move across the aqueduct - once Jones the Boat had got out of the way.   Jones the Boat then turned to me and said that I should have sorted out the traffic jam!  "I work for Wrexham Council now, not CRT - nothing to do with me".  It was him who messed it up!  Don't go blaming me - I was just watching with the rest of them!  With many novice drivers caught up in this boat jam, it was the proffessional driver who got it wrong. 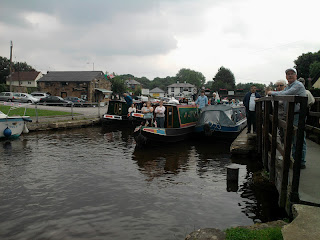 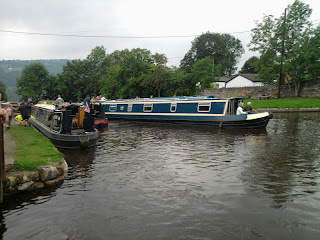 We haven't been out on the boat for the last few weeks as there always seems to be too much going on, what with work, appointments, family visits and RAIN!  We do however get a great bus service to and from Llangollen on a Sunday.  You can't get a bus after 5pm during the week, but on Sundays they're every hour till 11pm.   Guess who was in Llangollen last week ..... 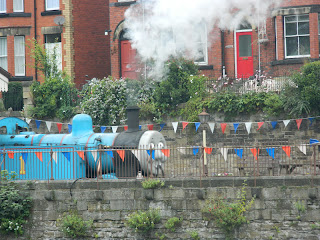 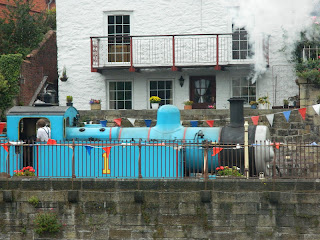 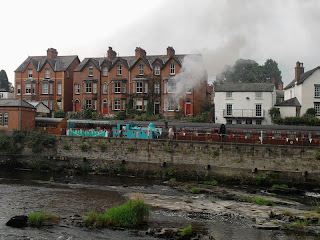