On your marks, get set, MOVE!

Finally, the ice melted enough to move.  So after a short wait for a Tesco delivery at The Mucky Duck we were finally moving again after almost 3 weeks.   We've seen more boats moving today, than we have done in the last 2 months put together. 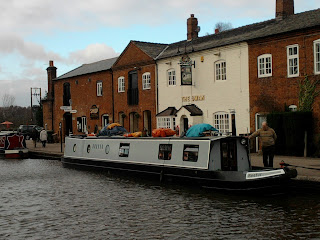 The first boat to cut a swathe through the ice was Sapphire, which had come from Streethay on his way to Bromley Whart for some work to be carried out there.  Easy enough past our boat, as we'd kept a large patch ice free for the ducks. 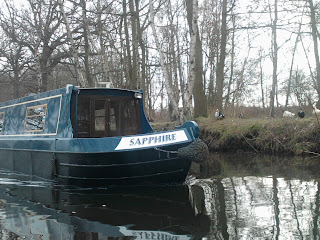 He had to put on a bit more power to get through the next bit though, which was still solid. 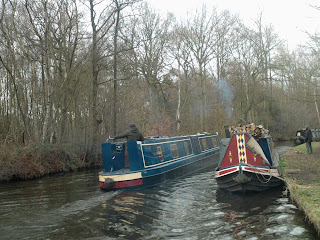 Within half an hour of this boat breaking through, the BW checker man was round taking numbers.  Talk about quick off the mark!  Good job though, there are boats that have been here for months - (one boat at least, years).  One bloke was complaining to us that he had been moved on (from outside the BW Fradley Yard, duh!) after he had been there for weeks BEFORE he was frozen in.  His argument to the BW enforcement man was that he was a 'blue badge holder' and needed disabled access.  Since when has the 'blue badge' scheme applied to boats?  Best get yourself a marina mooring mate instead of freeloading. 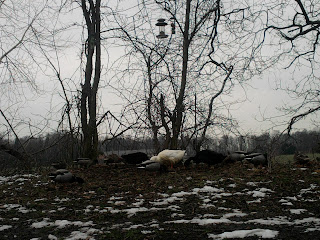 The ducks discovered the seed spilt by a very fussy nut hatch, who insisted on spitting out all the seeds he didn't like, in order to get to the black seeds which were his seed of choice.  We got a huge bag of wild bird seed from Aldi for £7.99.  Good old Aldi.  After a few days of our resident ducks having found the bird seed, they were joined by this odd looking duck - a muscovy duck. (Known as Barbaray Duck in culinary terms apparently - can't say I'm tempted). 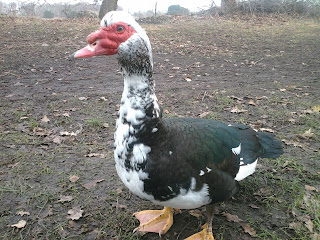 What's this - something has caught our resident 5's attention.... 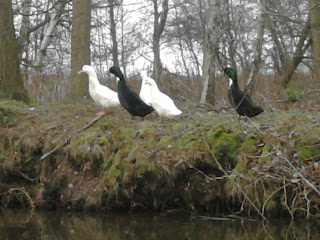 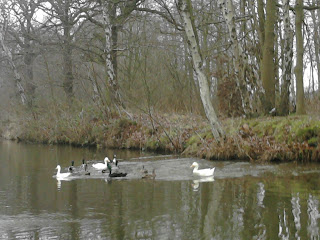 He's to the right of the tree 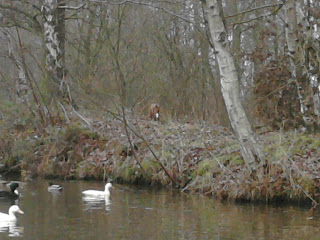 Missed.  Fox sloping off, hungry.
We were getting fed up with the ice, so we ordered a load of logs from Stuart, who's another helpful contact from the pub community, which arrived a few days ago.  That did the trick - the weather immediately turned milder.  I know - we should have done it a week ago.  We've now got a roof full of logs again, oak by the way, which burns incredibly hot, it's that hot in here, we've been sitting with the doors open, and atthracting very strange looks from passers by.  Unfortunately, the wood's that hot that it's burned a hole in the bottom of the fire grate, so we ordered a new one, which was delivered to the pub today.  (Yes, poor Dave had to walk back to the pub this afternoon to pick it up).
Whilst being frozen in, again - as in previous ice bound periods - we have met some lovely people (hello to Colin & Ellen from NB Oasis Too).  Again, people's generosity is heart warming.  From borrowing wheelbarrows & water containers, to offers of shopping, humping logs, coal to us, and even a load of 'morning' sticks ("I was making some for myself, and thought you might like some").  When the threat of the diesel van man not turning up, Plan B was devised in the pub, where by a posse would sus out the local fuel depot to see about getting containers filled.  "We're all in it together".  Crisis averted when Graham the diesel van can man arrived as promised.
Unfortunately, I cannot say the same of our immediate neighbours - they were the exception to the rule.  Didn't want to speak, don't need your water container, I'd rather get water in my litre bottle.  Don't want to use your big axe, I'd rather use my pen knife to cut this log.  Ok Ok, Dave says I'm being too harsh on them and some people prefer to keep themselves to themselves.  Oh and finally - don't want anything from the co-op a mile walk away - cos we've got a car and go there every day for our shopping!!!  Thanks - talk about I'm all right Jack!!.
Posted by Sue Hunter at 19:13

That Muscovy duck has been on Kings Bromley Marina since August but two weeks ago paid to much attention to Mrs Swan and Mr Swan insisted that he left, in a hurry, we had heard that he was down at Fradley.