After a very jolly new year spent in Kenilworth, with Rachel (my sister), Bruno & the kids, Bruno kindly drove us back to the boat at Sutton Stop.  We were about to move off,  (it's not our favourite place if you hadn't gathered that already from the last blog) when Roy on NB Gerald came round the corner, so we had to stay and have a pint with him in the Greyhound (the only redeeming feature of Sutton Stop).  He had moved there in order to catch a bus & train to go to the funeral of Horace Foster - better known as "H".  Dave was also going to the funeral, but we'd planned to go from Atherstone.  Here's a lovely picture here [click] with H holding the horse - H and his father were one of the last horse boatmen. 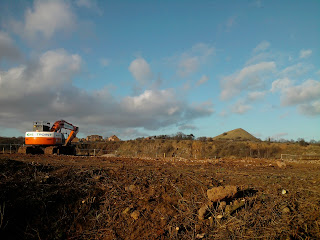 They're building a huge housing estate right next to the huge hole that is a quarry on the outskirts of Nuneaton - good luck with that one, I don't think i'd fancy the first house nearest the precipice.  I'm sure the safety fencing will keep the kids away from the edge. 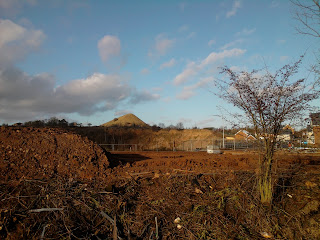 Meandering through Nuneaton - allotment city - nothing round the prop this time, but we had a good game of avoid the obstacle in the water instead.  This one is part of a burned out cruiser boat. 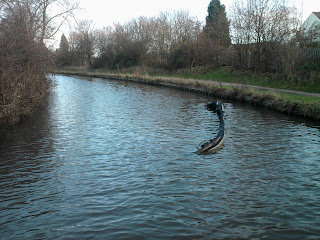 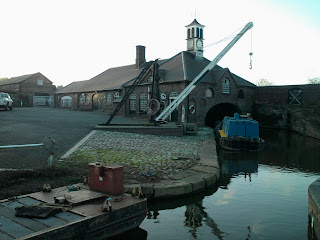 Past BW Hillmorton depot, and into Atherstone, just before the nasty weather hit. 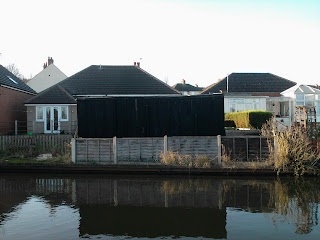 Above - a canal side house in Atherstone.  Why buy a house next to the canal, then do your utmost to mask the view of it?  It's not like the canal sprung up one night catching the owner unawares - it's been there for a couple of hundred years! 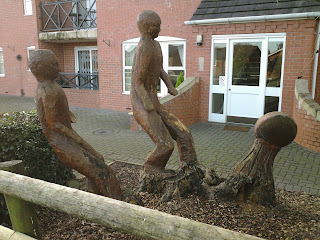 Lovely wooden canal side sculpture below the top lock.
We waited above the locks for the storms to ease before stocking up at Aldi, and descending the locks.  En route, I spoke to a bloke on a boat coming up the locks towards us & I said unfortunately all the locks would be against him, as BW were moving equipment up the locks in front of him, probably equipment for the stoppage.  What stoppage he said - I havent seen any notices about any stoppages in this area.  I explained that the Atherstone flight would be closed till the end of January.  Just as well I'm going up today then he said.  Don't know how far he got, as there's another stoppage at Brinklow till 9th March, same comment applies to the Braunston Hire boat heading up the locks yesterday.   There's been a flurry of boats today moving in either direction to get through before Monday, one boat was the infamous "Reckless" - the boat that Guy Martin DIDN'T build on the telly.
Posted by Sue Hunter at 19:14