As much as we loved being in Birmingham, it was time to move on, so with 35 locks to do to get to a decent mooring on the Birmingham & Fazeley canal, we got up early (for us) - in the rain - and went to the top of Farmers Bridge locks to fill up with water & do the necessary. We were on a mission to get to the Dog & Doublet.   I took a walk down the locks to have a look.  Fantastic. The first 5 locks were full, so ready for us to go down.  I opened the lock gate at the top lock & reported back to Dave.  We were really looking forward to going down the flight with all (that I could see) the locks 'with' us.  The water tap at Cambrian Wharf must be the slowest we've come accross, and would you believe it, just as the water tank was full, a Viking hire boat came past us and straight into the open lock.  They did ask if it was OK to go in, and as we were still attached to the tap, we waved them through.  B****r!  Now every single lock would be 'against' us, and at 8.30am, not much chance of anyone coming up the flight. 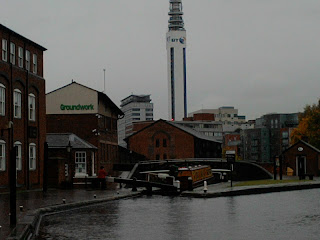 Viking hire boat in the top lock at Farmer's Bridge flight.
Now I'm very conscious of not rushing people at locks, I know I hate being pushed & know how it feels when 'helpful' people wind up the paddles when you - and the boat- aren't ready for it,  but blimey these were SLOW!  The couple on board (him driving & her doing the locks) insisted on doing just the one lock at a time.  In a flight like this it can be so easy - while waiting for the lock to empty, walk ahead to the next one, just a few yards in front and prepare the lock.  Here, it was just a case of opening the lock gate, then walk back up to the lock the boat is in, and let it out.  Boy they didn't half make hard work of it.  I resorted to walking in front of them and opening the odd lock gate ready for their boat to enter, but they still didn't get the hint.  So what should have been a very easy lock flight turned into a bit of a saga.  I was opening and closing gates for them all the way down, then returning to Dave and the boat & doing the same.  I now have arms and thighs like Popeye's.﻿ 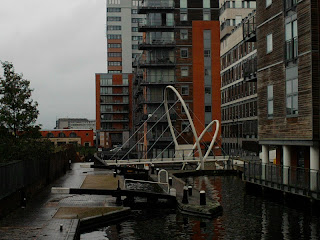 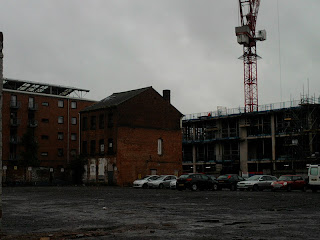 New buildings going up around the old ones 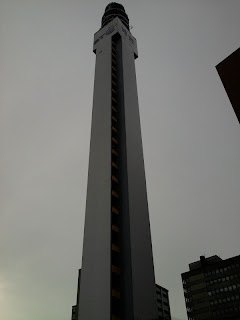 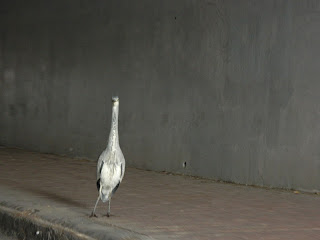 He's as surprised to see me, as I am him - heron under a bridge in the middle of the city
Eventually we descended the 13 locks.  The sun came out, and we turned left at Aston Junction.  thankfully the Viking hire boat went right, down the Digbeth branch, and we continued down the Aston flight. 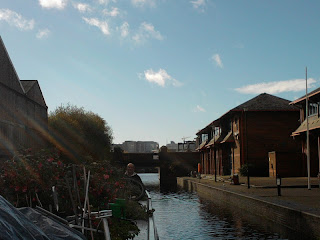 High rise Birmingham buildings in the background.  It was just past here at the next lock that I met  Andrew Denny, he of Granny Buttons fame.  He said he had been stranded in the pound between lock 7 & 8 over night with a piece of wood wedged in his prop, and also stuck on the mud as there was no water in the pound & had to call out CRT.  I then walked between locks, so Beefur could remain in the middle of the channel & reduce the risk of running aground.  The pounds were low but CRT had sorted out the problem - for now - unlike a few others coming down in the days behind us who were telling tales of how long they were stuck for.  24 locks done, 11 to go. 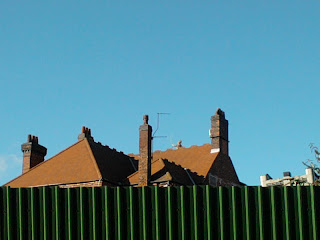 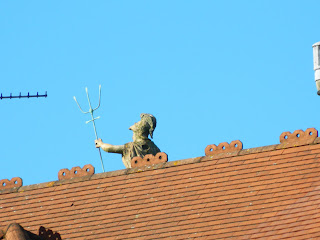 Another unexpeted sigh at Holborn - I think it's Boadicea holding a trident on a roof.  Bizarre. 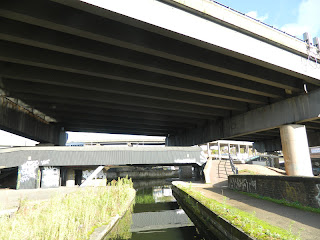 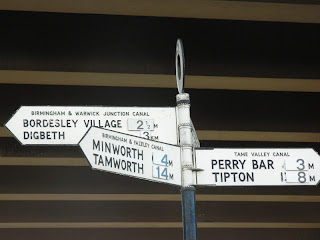 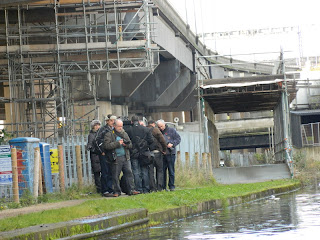 Well, they come in threes - unexpected sight no.3 - a gaggle of photographers under spaghetti junction.  They were clicking like demons at the boat going past.  I have no idea what they were doing there!  A comedian on  bike was cycling towards them & shouted to us "blimey mate - you're popular!" 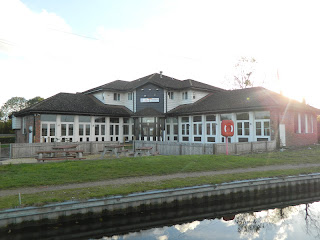 This barn of a place was The Kingsley Arms, it's now an Indian restaurant.
The amount of rubbish floating between each lock was awful - loads of it.  People are still chucking alsorts into the cut, this as well the added leaf fall problem at this time of the year!  The lock gods were not with us at all today - at Minworth bottom lock the bottom gate was shut, with a paddle up, but with no boat in sight approaching.  Shut the paddle & filled the lock.  This was how we found the next 7 locks!  Sometimes the bottom gate was open, sometimes closed, but always with either one or two paddles open.  I asked a cyclist coming towards me if he'd passed a boat moving, in either direction, he said not.  Oh, and the anti vandal locks hadn't been re-engaged either.  This is the epitome of bad boating.  If you can't be bothered to do it properly - don't do it at all!  So thanks to a numpty boater, every lock took extra work.  We were tired and hungry, but managed to get to the Dog & Doublet just as it was getting dark where we had a warm welcome from Jim & Trish - as always. 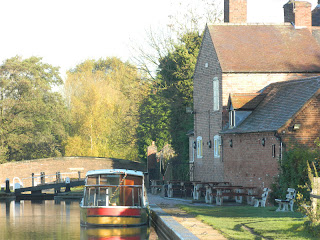 Sounds like a busy day, at least the Aston pounds weren't as empty as when we went up through them :-)