Want to vote in local elections? Declare yourself homeless!

With the local elections coming up on 3rd May, I contacted my local council in order to obtain a vote. I have been down this route before - 4 years ago, for the last local elections - but gave up after many phone calls (not returned) it seemed no one knew how I could register my vote, and I eventually gave up in dispair.  This time I was determined, but I was rather surprised to discover that I have to sign a form "Declaration of local connection - Homeless" form.  I explained to the council that I was not homeless as I live on a boat, and although we travel around for 7 months of the year, we pay for a home mooring for 12 months of the year, so my "local connection" is the area Llangollen Rural, under Wrexham County Borough Council.  Well it would seem that according to The Electoral Commission, "The term homeless will include anyone who does not have a current fixed abode ... which may be because you travel around, for example, in a camper van or canal boat".    It also adds to the confusion, that we don't get any mail here to the moorings, and my postal address is my mum's house. 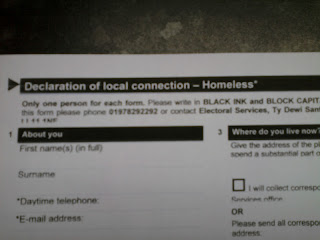 No idea why these pics have decided to turn themselves sideways - can't get them to rotate sorry. 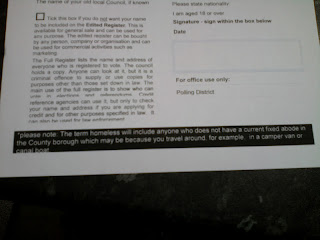 I must say that I'm rather annoyed to put it mildly, that I am classed as a homeless person, in fact, I'm absolutely b****y furious!  The form has to be returned by 18th April so I'm just going to have to fill in the form through gritted teeth.

Incidentally, Dave has opted to remain vote-less since leaving the R.A.F. preferring to "stay under the radar" as he puts it!