Time out in Kenilworth

I've returned to the boat after having spent a few days with my sister Rachel & family in Kenilworth, as Rachel was going to be rather busy with work.  My primary role (as well as chief cook and bottle washer) was dog walker, which involved getting up when it was still dark.  Not something I'm used to any more!  Not to worry, Cole the dog appreciated it!  Getting into the bathroom was a bit tricky of a morning (despite them having two) what with 3 girls getting ready for school, 2 of which are teenagers.  They have it mastered, but it all goes a bit pear shaped with an extra body around - hence me getting out of the way and walking the dog! 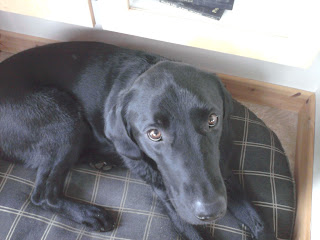 Very mild mannered Cole, a lovely black lab, who unfortuately will chew and/or eat most things that come his way (as anyone who's had a lab will testify). 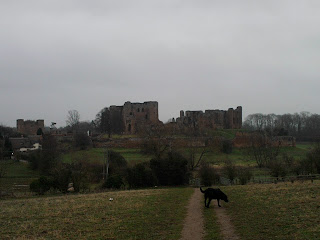 Accross the fields, and back towards Kenilworth Castle. 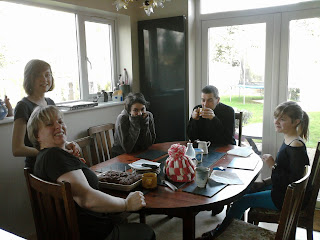 Pic:  Rachel, Nia, Rhiannon, Bruno and Iona, about to tuck into birthday cake.
It was Rachel's birthday on Sunday, so it was really nice to be there.  Nia had made a fantastic chocolate cake in the shape of Pi, not A pie, but the mathematical symbol Pi.  By the way, Rachel is a maths teacher - we dont usually make each other cakes in the shape of  mathematical constants. 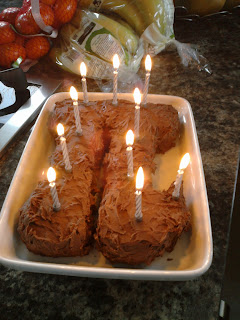 Here's a close up of said Pi cake.  Well done Nia, and very tasty it was too.
Getting back to Stone from Kenilworth was a bit of a nightmare - I got into Birmingham New Street no problem, but then all trains were stopped due to a lineside fire near Wolverhampton.  I had scoured the National Rail website the day before, and found that I could save £6 on the fare by going via Birmingham.  Had I just bought the ticket from Coventry to Stone via Rugby, I wouldn't have come anywhere near New Street.  After sitting on my train (to Stafford) for over 40 minutes not moving anywhere, a large Virgin Pendolino pulled up on the platform next to me.  "Where's this train going then?"  "Glasgow".  "Do you go through Stafford?"  "No - Tamworth".  That'll do!  So I jumped on it and changed in Tam'uth & got back to Stone without further delays - all the time thinking 'I hope this train does stop in Tam'uth', don't fancy explaining to Dave that I'd ended up in Glasgow for the sake of saving £6!
Whilst I was having house showers in Kenilworth, Dave continued from Fradley into Stone on his own. 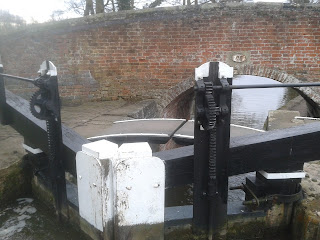 Hoo Mill lock has - so far - escaped the Elfin Safety brigade and footbridge has not been vandalised with hand rails - yet. 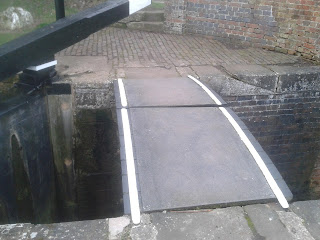 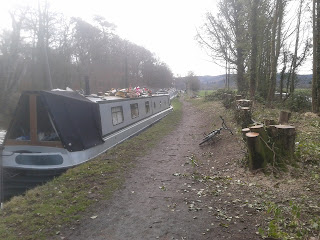 Everywhere you go, trees have been cut down, and where there's cut down trees -
there's liveaboards... 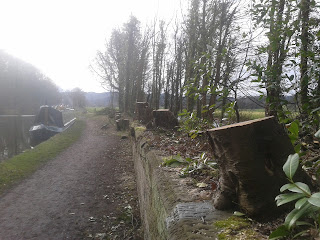 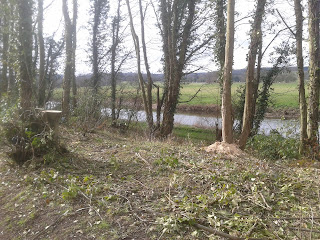 ......and yes, I am jealous, after having spent good money on having a load of logs delivered to the boat a few weeks ago when we were frozen in. It did the trick with the weather though, we have'nt burned it yet and looks like we'll be carting it back up the Llangollen.
Posted by Sue Hunter at 17:32