Like Buses: No blogs for a week - then two come along at the same time

We've had a few days at Napton and The Folly pub, which is fantastic.  The locals, landlord and staff are very friendly, which makes the atmosphere very welcoming.  The shop is open till all hours, and although he doesn't sell papers, he was happy to get Dave a paper if requested the previous day.
We're not far out of Braunston, (with an internet signal, which is a bit rare round these parts) but decided to stop short and wait for Gosty Hill to arrive with much needed diesel (the fact that it was bitterly cold had nothing to do with it).  This is an old pic of Gosty Hill, I had my phone/camera ready to take a pic as they arrived, but I got excited at the sight of them, I forgot to take a photo. (We were about to run out of heating oil!), anyway, don't know where this pic came from as it was in my archive, so very sorry if I've "stolen" someone's pic.  Very impressive though!  We do like to give Iain & Alison our business when ever we can, as Iain got us out of a very tricky situation when we were iced in up the Ashby back in Jan 2010 and were about to run out of fuel.  Gosty Hill was iced in at Sutton Stop (I think) but despite this, he arrived with a mate, in his mate's van (Ralph off NB Annabelle) and delivered loads of diesel by containers in wheelbarrows in the snow.  Over and above the call of duty.  He wouldn't take any 'delivery' or petrol money.  If he hadn't arrived when he did, I think we'd have had to abandon the boat.  Sorry to hear that they're selling up, but hope they get to do some cruising when they do & come & see us up the Llangollen. 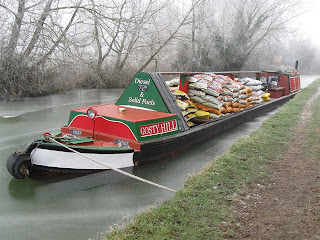 On our way to Napton we stopped short of the Folly, above lock 12, and awoke to find the canal frozen, so we decided to do a runner and get nearer civilisation at the bottom of the locks.  We need'nt have been so twitchy, as there was no ice at the bottom of the locks.  Still, better to be safe than sorry, after the last two winters of being iced in. 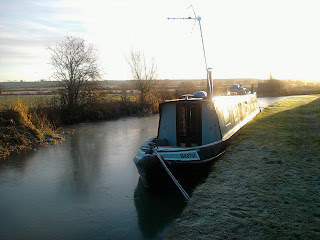 Photo of me in silly winter hat - one of many which will no doubt have an airing soon ... 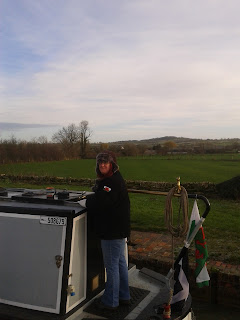 The pound above lock 13 at Napton was incredibly shallow, the boats in the moorings were sitting on the bottom.  Apparently, someone had left the paddles open on the lock overnight and drained the pound.  Not nice.  Matilda Rose had gone down in front of us and had warned us of the low water levels, so we let a couple of lock fulls of water down, but it wouldn't have made any difference as the pound was so low.  Water was now coming down, but it would take a while for the level to get back to normal.  We've seen alot of boaters leaving paddles up, and not closing gates whilst on the South Oxford.  Mostly single handed boaters, who put their hands up & say "oooh sorry, I'm single handed" as if that's some kind of excuse.  Look Matey - If I can do it single handed - anyone can - and if you can't do it properly and shut gates behind you "because you're single handed" - then don't do it at all - get off the canal! 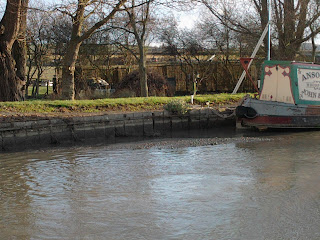 Before Napton, we took refuge in Fenny Compton when the weather men forecast doom and gloom and violent storms.  We picked this spot, which luckily was in a bit of a dip, so missed the winds.  Felt a bit sea sick in the evening, but by morning all was fine and sunny again. 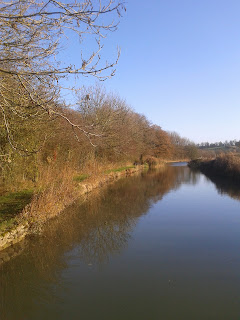 Whilst we were in Fenny Compton getting water, a 70ft Alvechurch hire boat was turning in the winding hole in a howling gale - which he did very successfully.  Dave went over for a chat and discovered that the couple on the boat had hired it for 3 weeks, as they were having a boat built to live aboard, and wanted to experience boating in the winter, to make doubly sure that it was the life for them.  They had hired a maximum length boat, far bigger than the one they were having built,  and in December.  Well done them.  I'm always banging on about people not doing their reseach before buying a boat, but this couple had done it in spades.  We wished them well in their venture.
Posted by Sue Hunter at 19:14