After attending the Park Head Canal Festival, we spent a couple of days at Merry Hill waterfront, with Frank and Gill (NB Fragil).  I finished my latest rag rug commission, and was able to post it off, which was nice.  I also had time for a bit of retail therapy in the Merry Hill shopping centre, and even managed to find my way out of it - unlike last time I was there, when I couldn't find a door out! 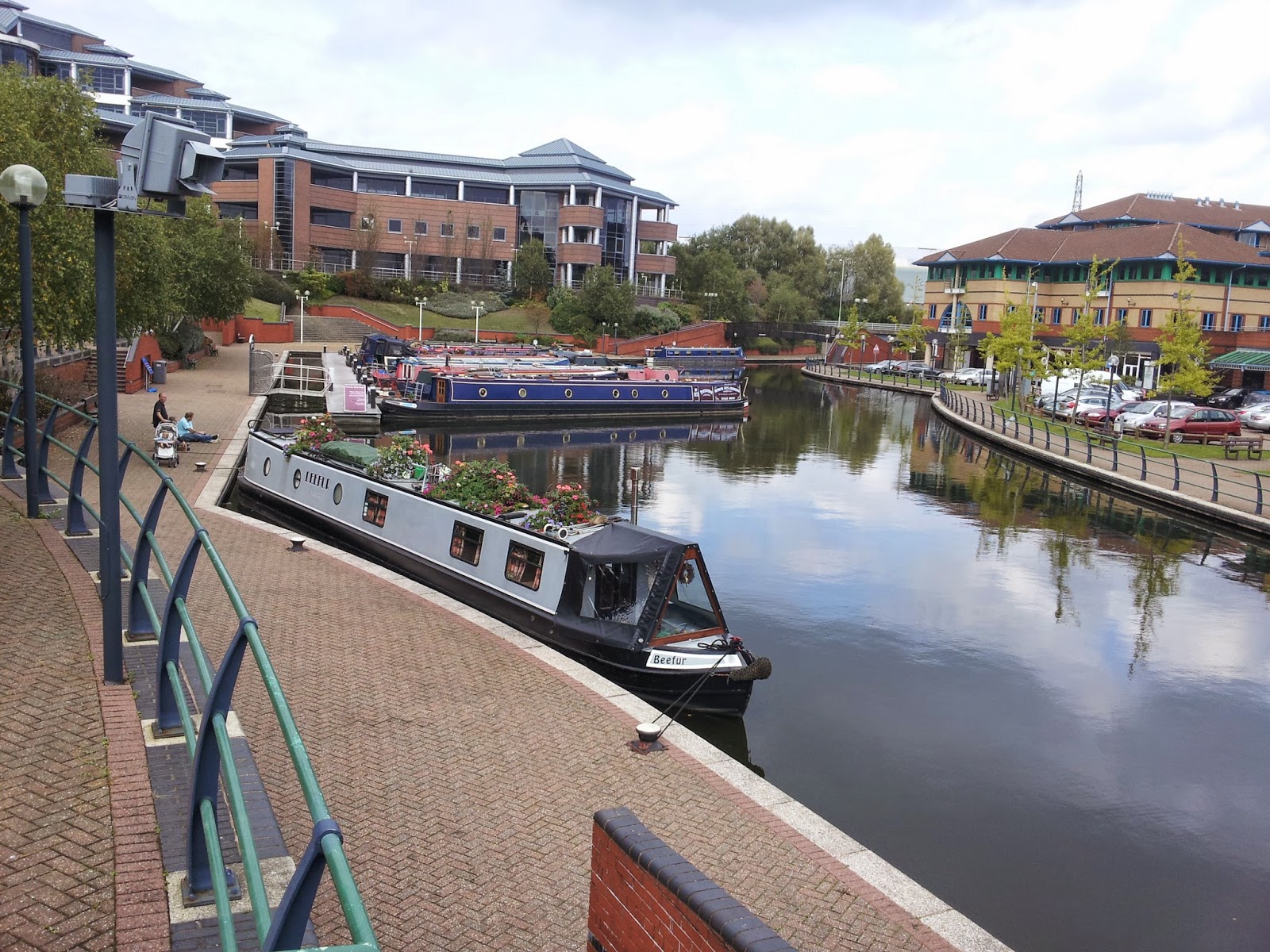 Frank and Gill suggested we join them for the Staffs & Worc canal society autumn cruise to the Fen's Branch / Stourbridge Extension Canal, and as we are members, we decided - why not! 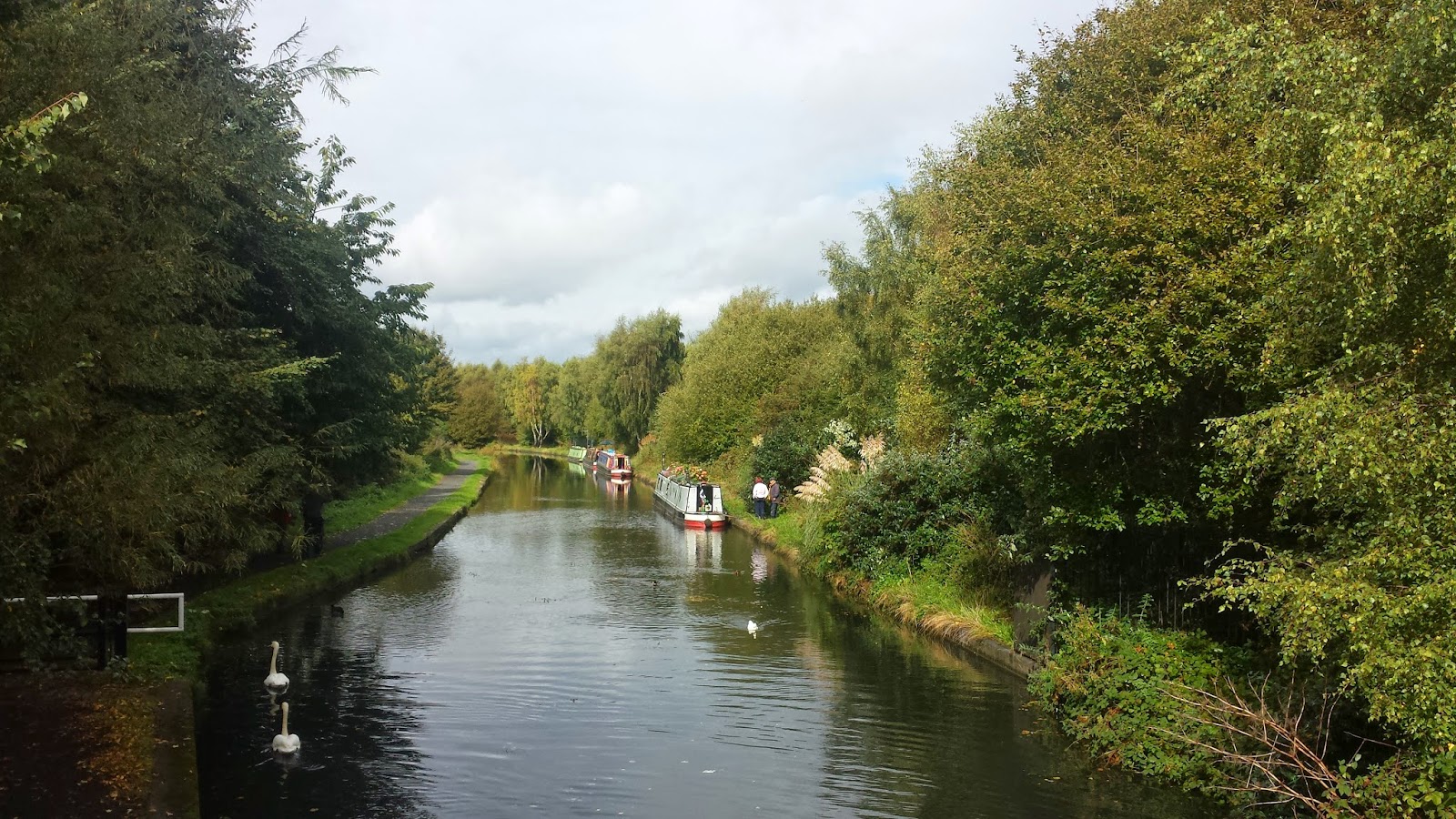 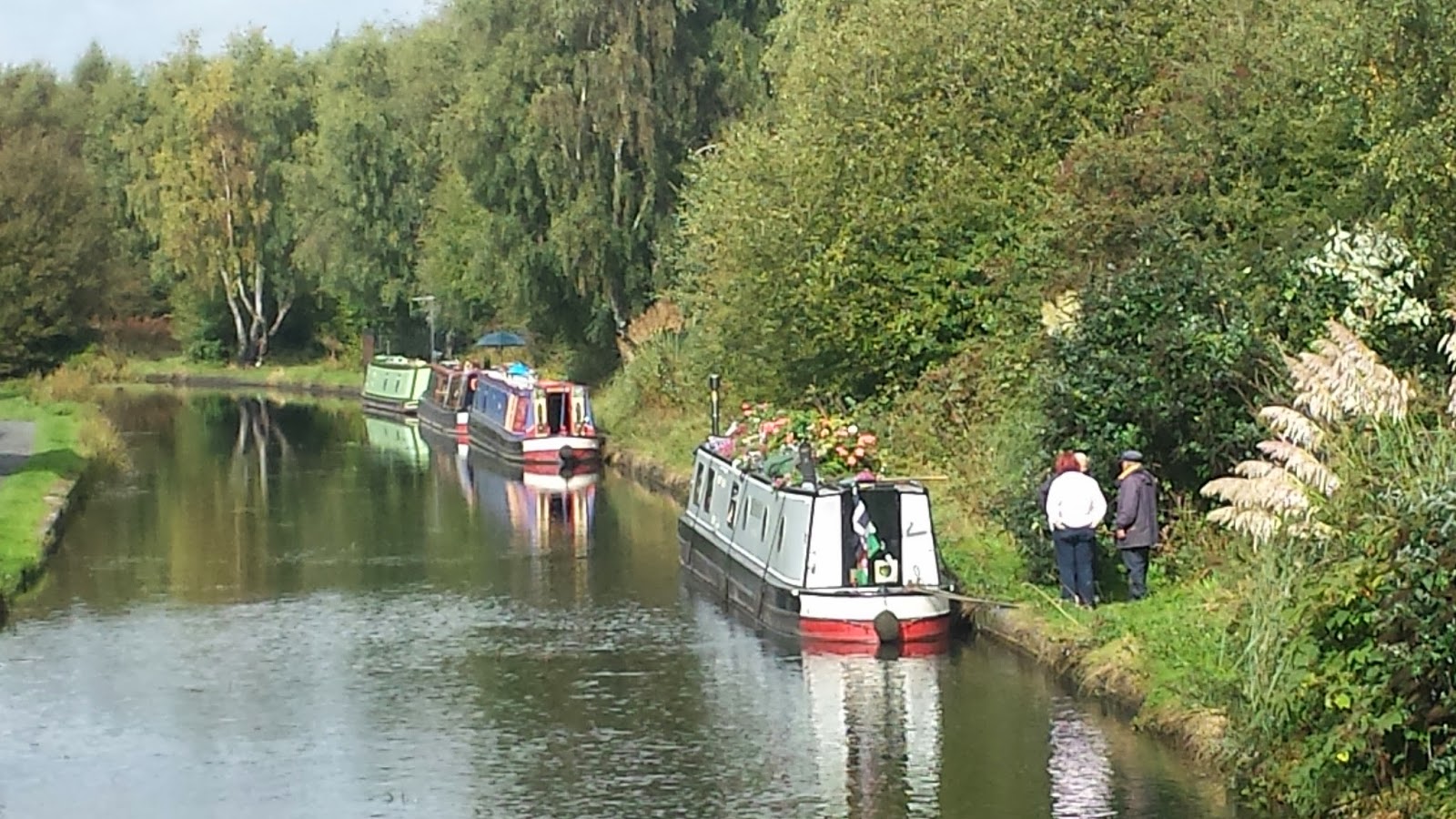 Not having been here before, we were pleasantly surprised at this tranquil setting. 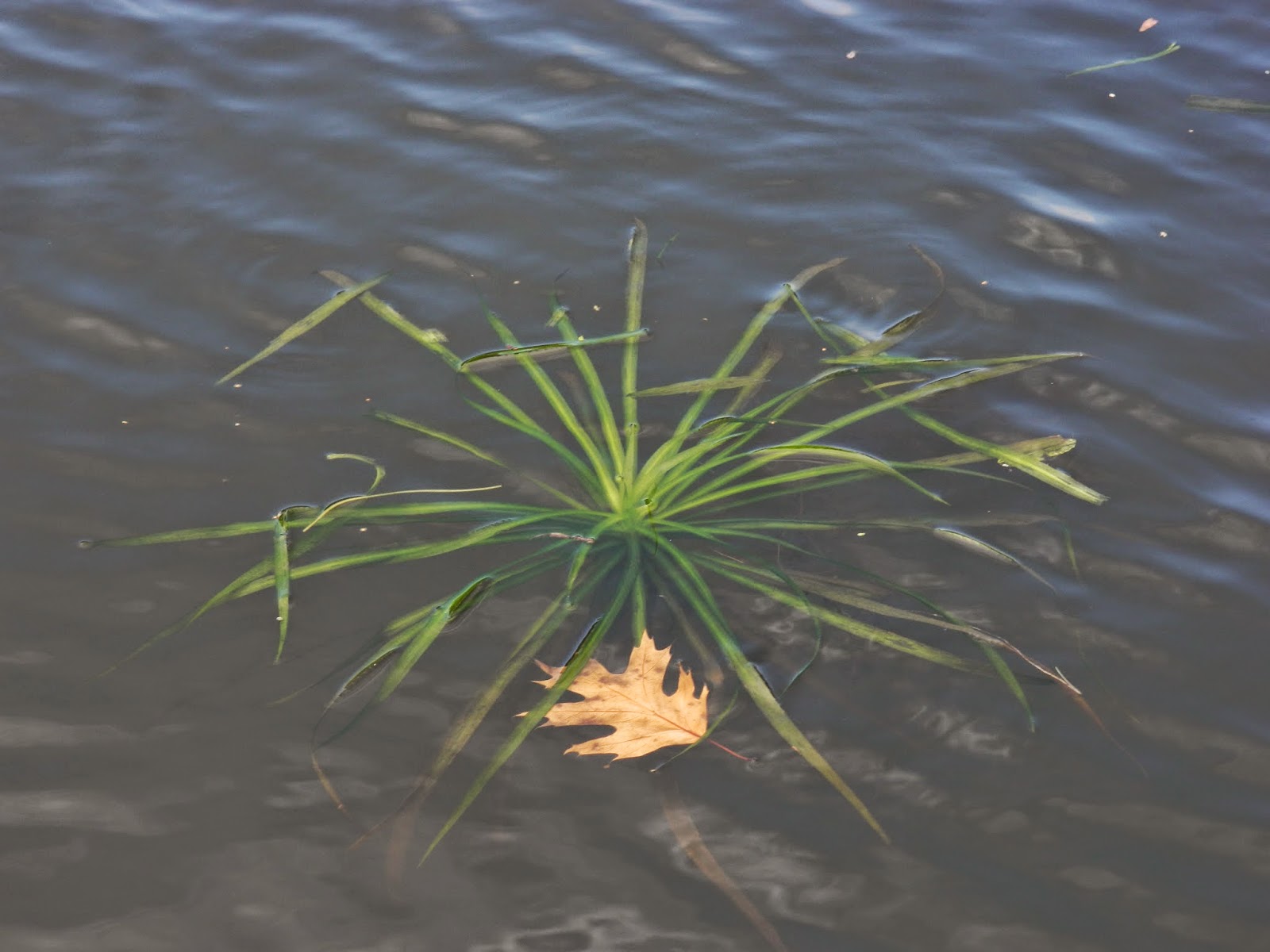 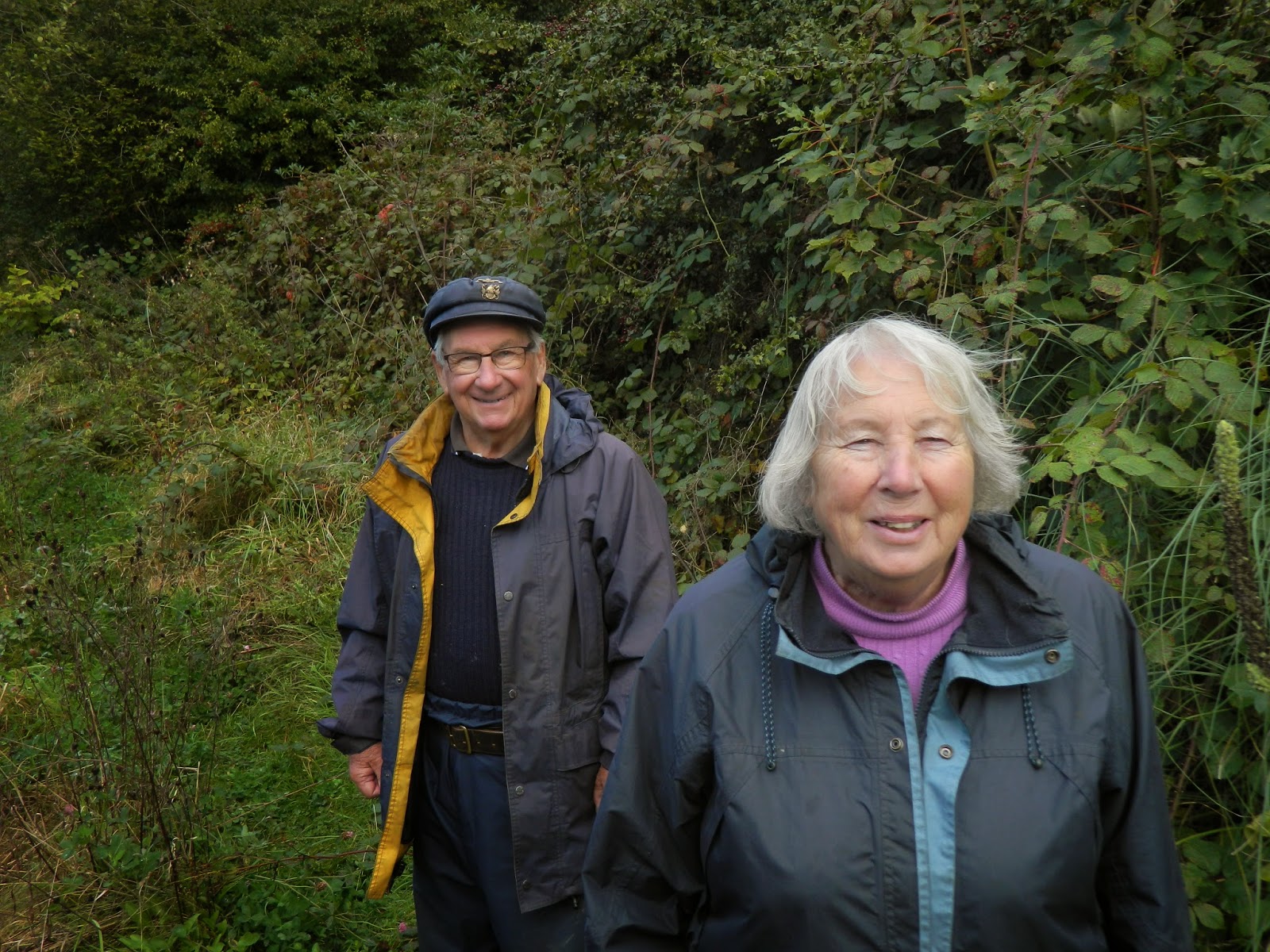 
Unfortunately, the weekend itself didn't start off very well - we were in a convoy of 4 boats heading down the Delph locks.  NB Compromise was first down, but they got something round their prop near the bottom of the flight.  Nothing major, and by the time we got to the bottom, they had cleared it, and started off behind us, now boat number 3 in the flotilla, with Frank and Gill leading the way.  Within half a mile, they had disappeared from view, eventually appearing being towed by Edwin NB Ferrous.  Again, they had something round the prop, this time however, it was a bit more serious.  They limped into the mooring area and commenced the two hour operation of extracting the huge double mattress, the springs of which had become entangled in the propeller.  Everyone present contributed their various prop clearing equipment, and manpower to try and remove this obstruction.  The mattress was free on one side, but not on the other, so NB Compromise was poled to the other side of the canal, and the process began again, of trying to free the other side.  It was at this point that Andrew Denny (NB Granny Buttons) from Waterways World appeared with his camera, and captured the freeing of the mattress.  He had come to speak to Chris Dyche and/or Ann Pollard from the Staffs & Worcestershire Canal Society about the cruising of this relatively uncruised bit of canal, with the angle of "Cruise it or loose it" for an article in Waterways World.  Well, he got a story all right!  With some telling photographs. 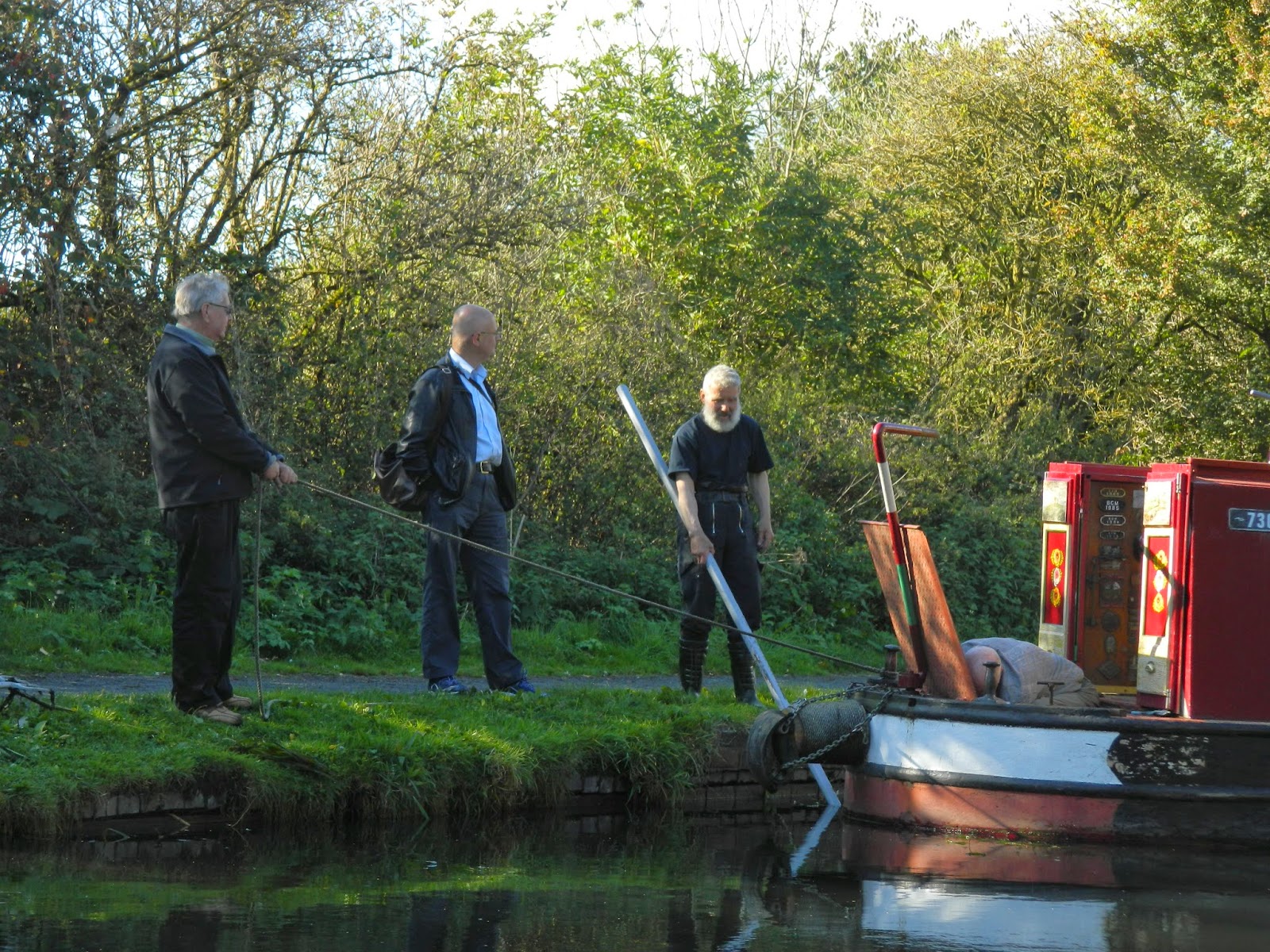 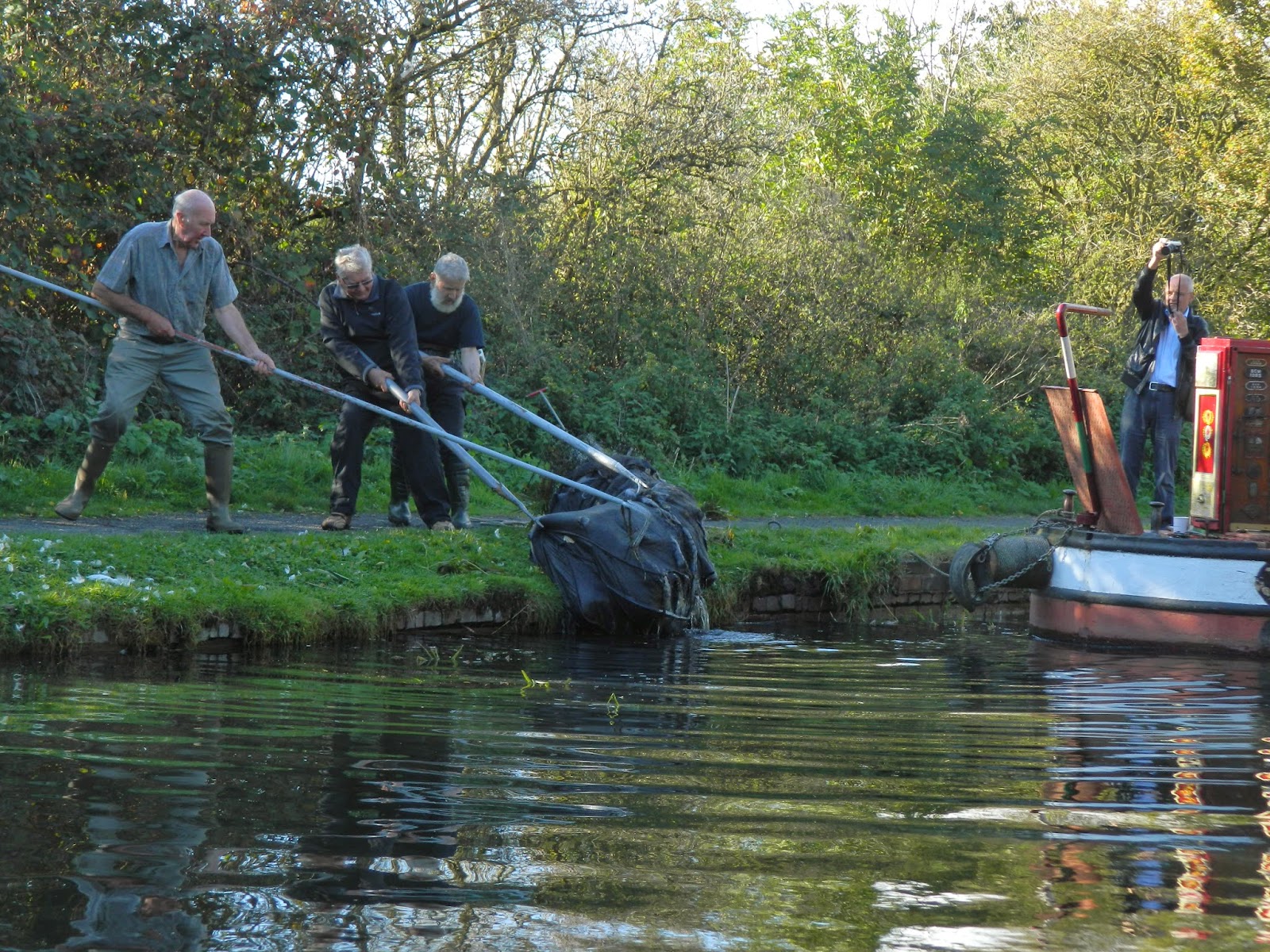 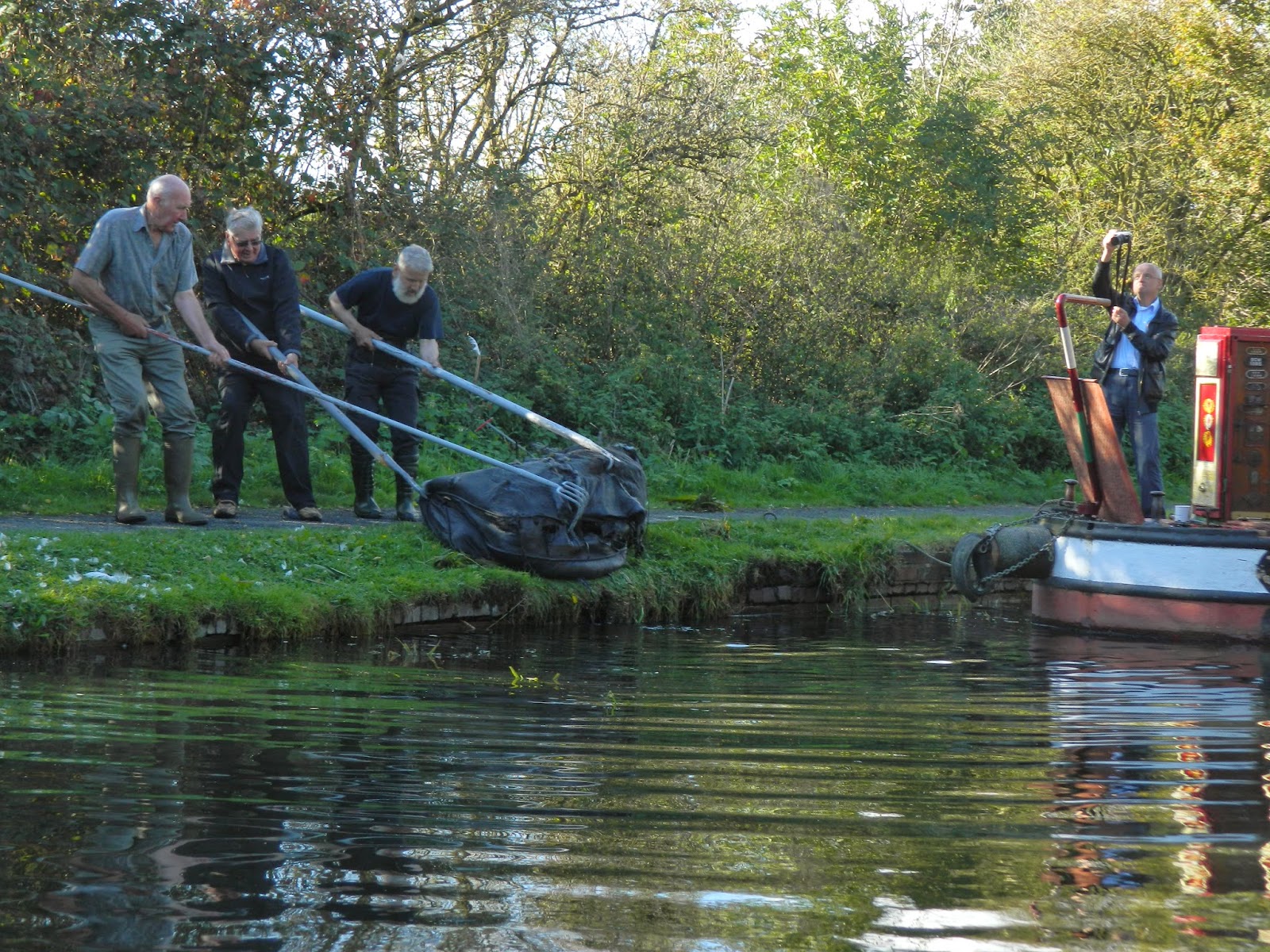 Andrew Denny on the right, taking photos of the offending mattress. 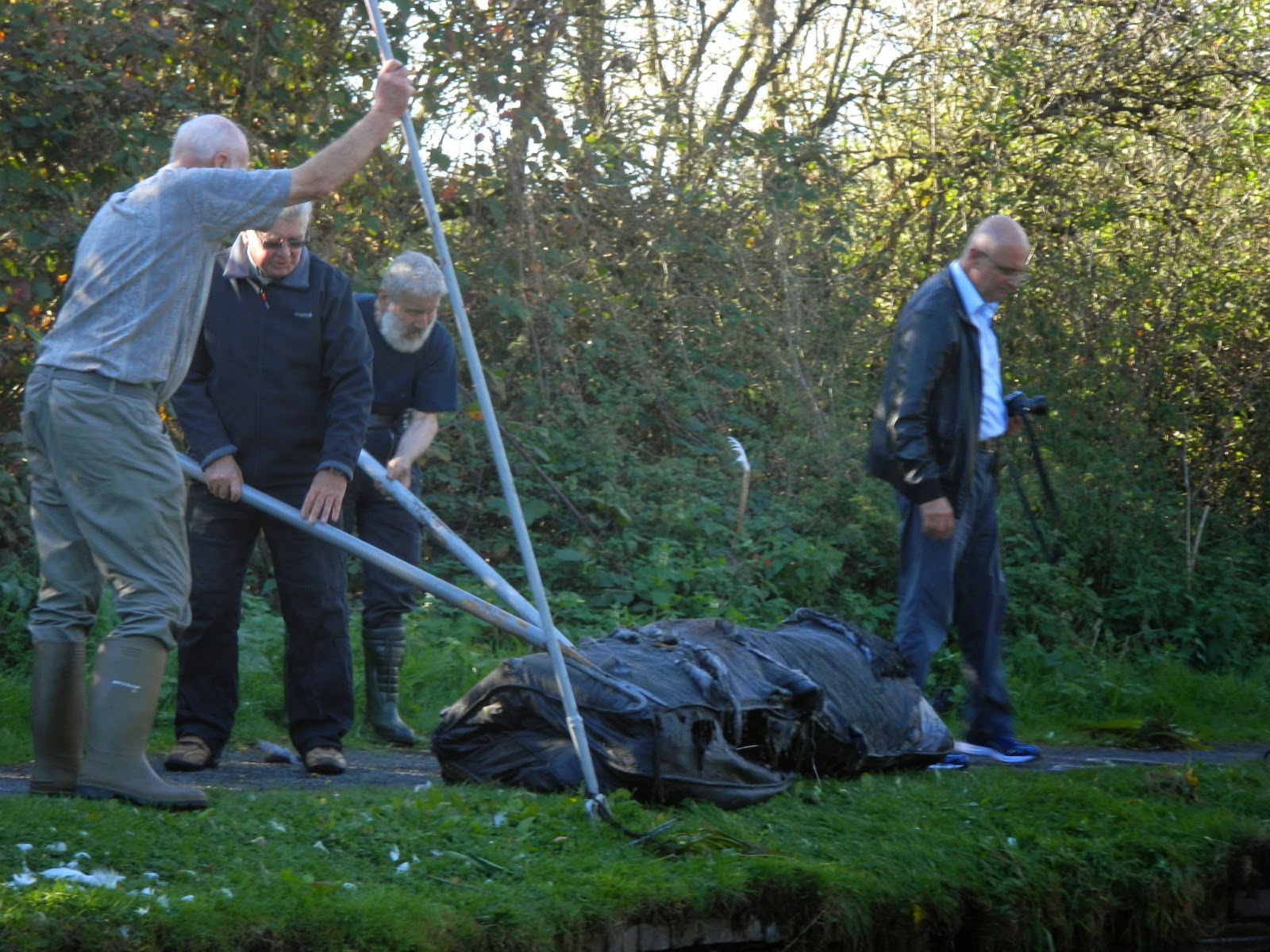 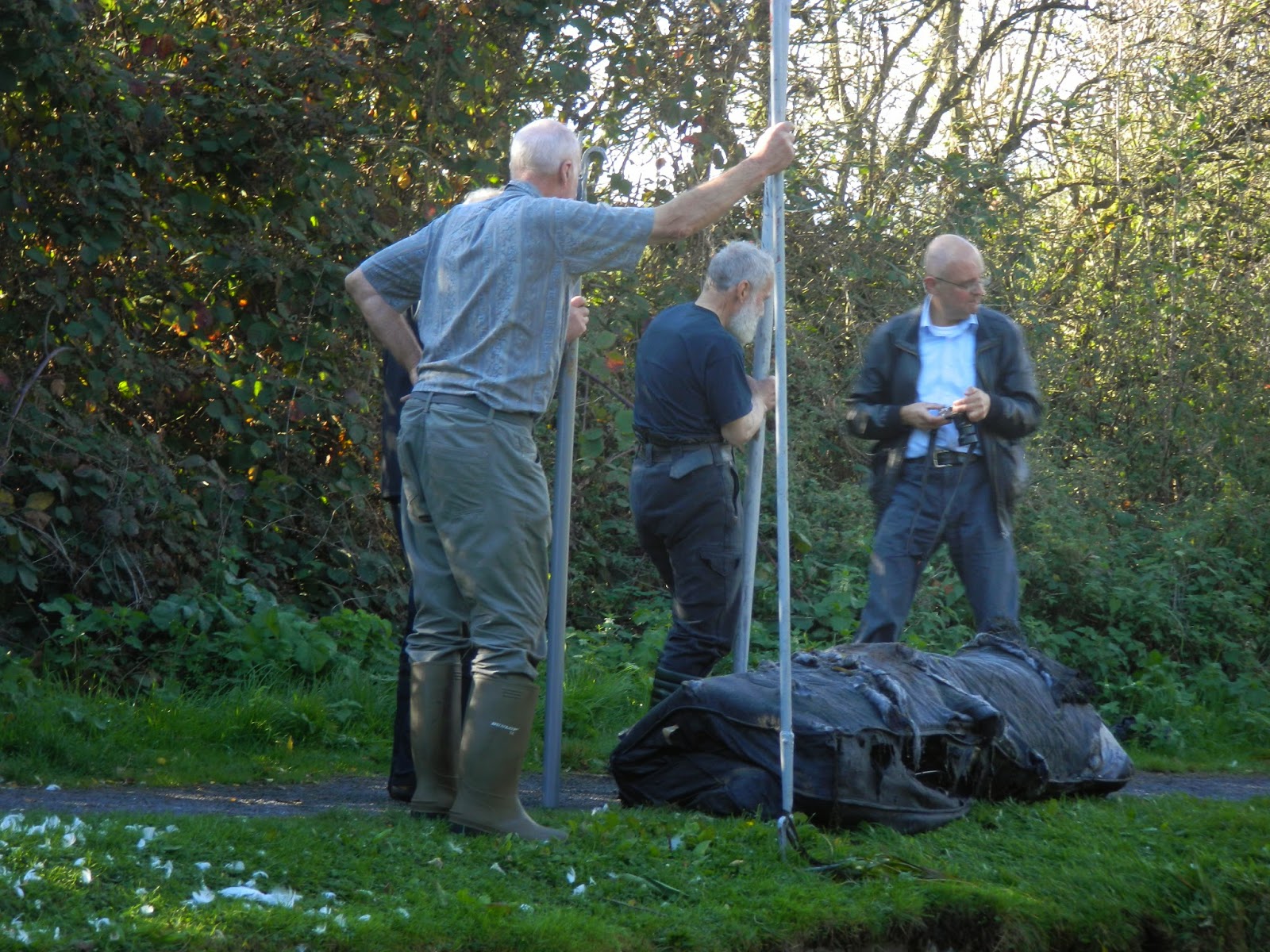 Andrew then got the men who had extricated the mattress, to stand with poles and hooks at a jaunty angle while he took more photographs.
After all this hoo ha with the mattress, Derek and Mary from NB Compromise then laid on a lavish spread of pork butties with loads of accompaniments and puddings (thanks also to Ann NB Sunbeam), damson gin and wine.  We had a great evening, and were made to feel very welcome (not having attended one of the S&W's cruises before, we didn't know what the event entailed).  There were only six boats who ventured up here, but hopefully next time there will be more.
The weather, I might add, was perfect for sitting outside. 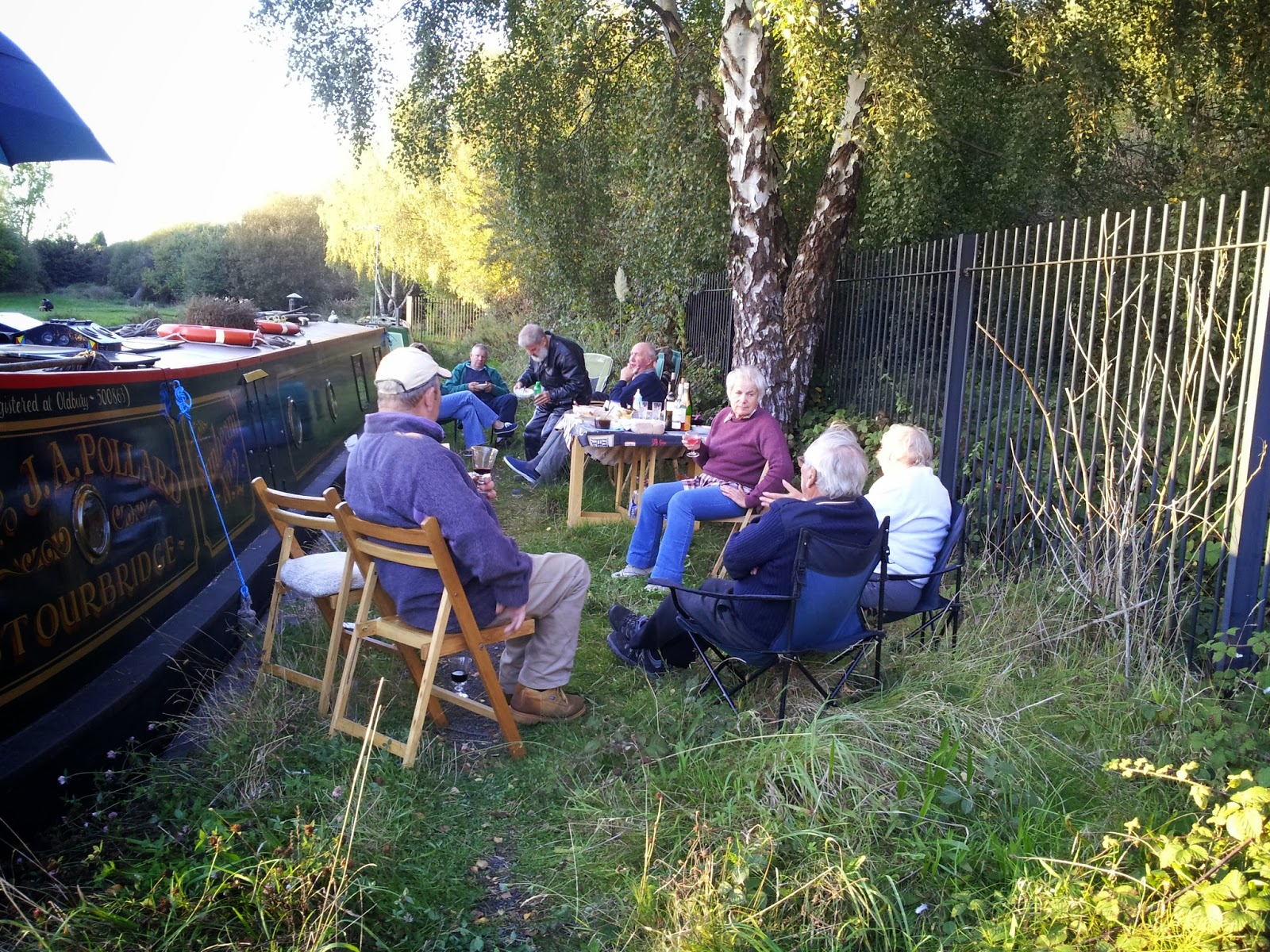 During the weekend, Dave set about clearing up the mooring area which was completely overgrown.  Apparently, the area was tidied up by BW back in 2004.  New edgings constructed, new mooring rings installed, and a fancy metal fence was erected to make it more secure.  However, nothing seems to have been done since, and it appears to have been forgotten by CRT completely.  Nothing has been cut back or cared for, for years.  After a few hours digging and strimming the area was transformed.  You could now even see the mooring rings. 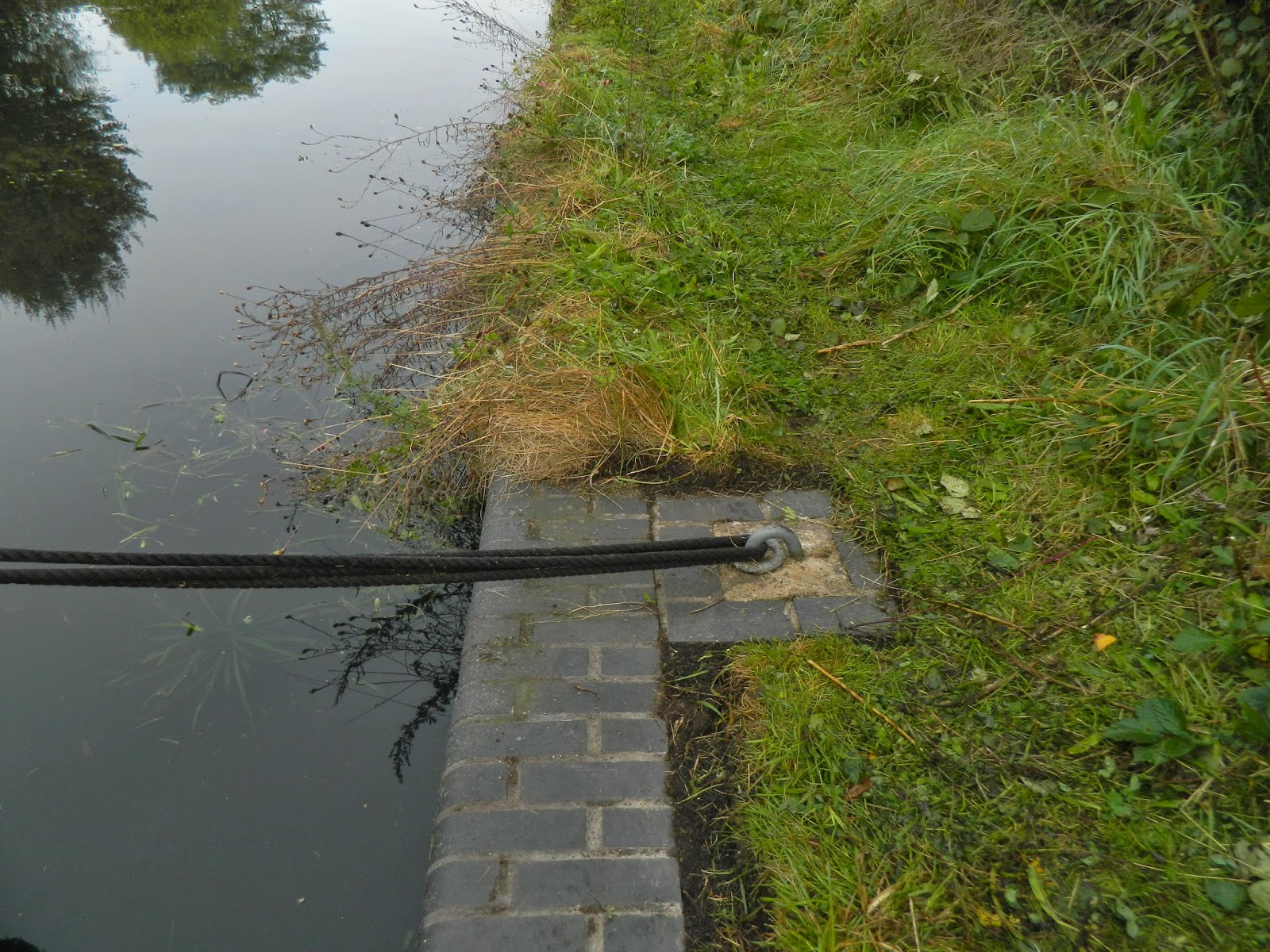 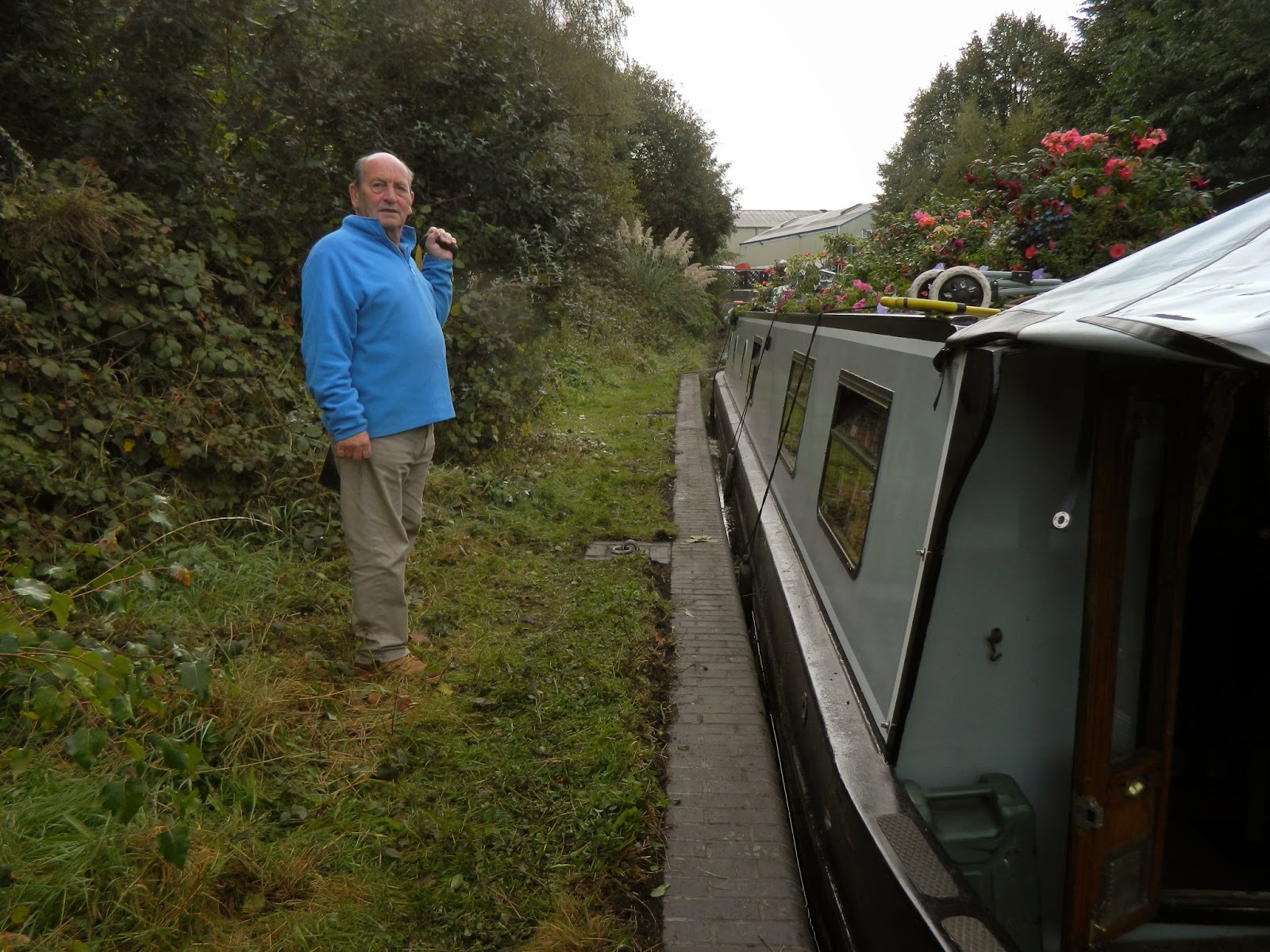 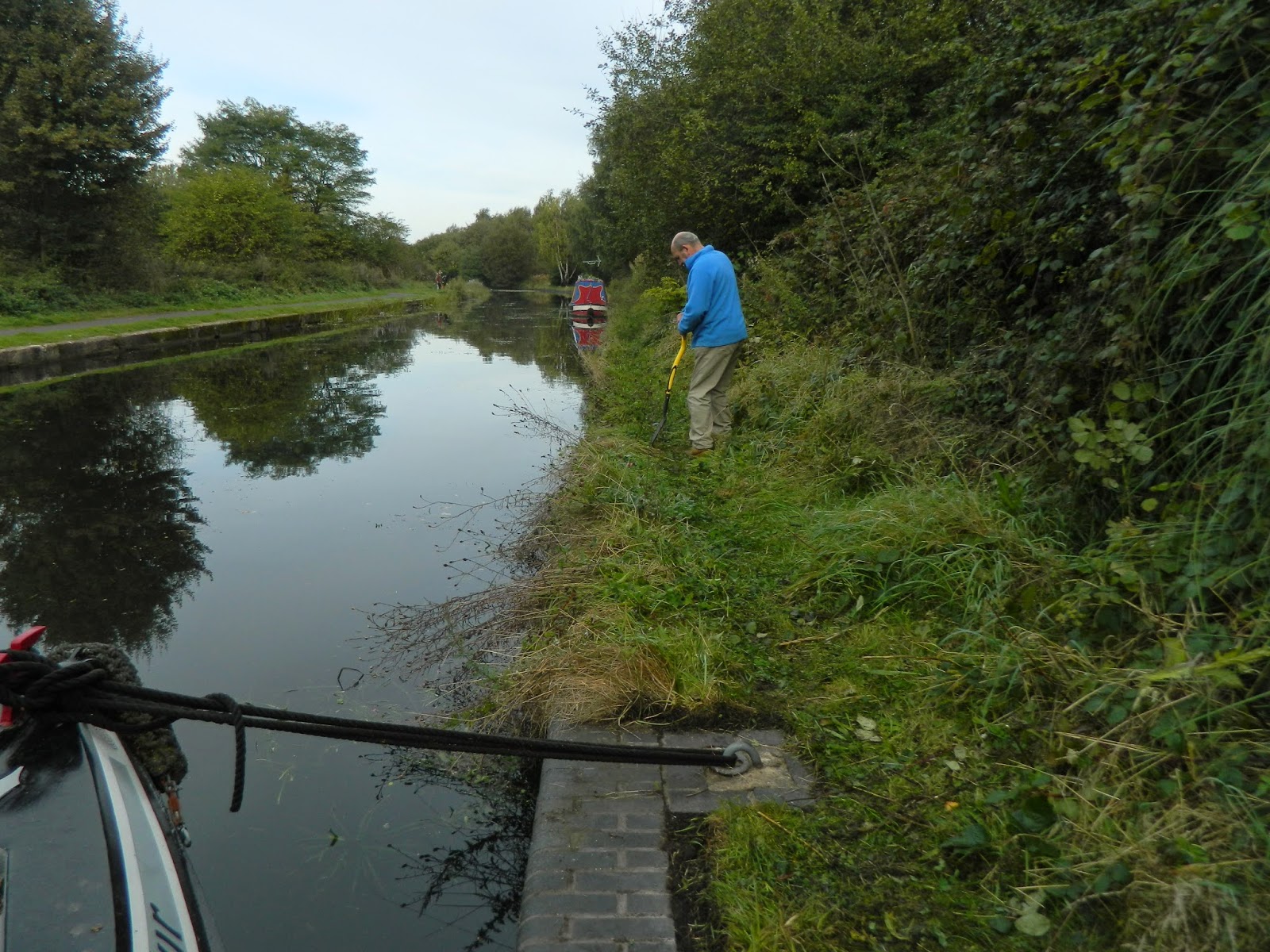 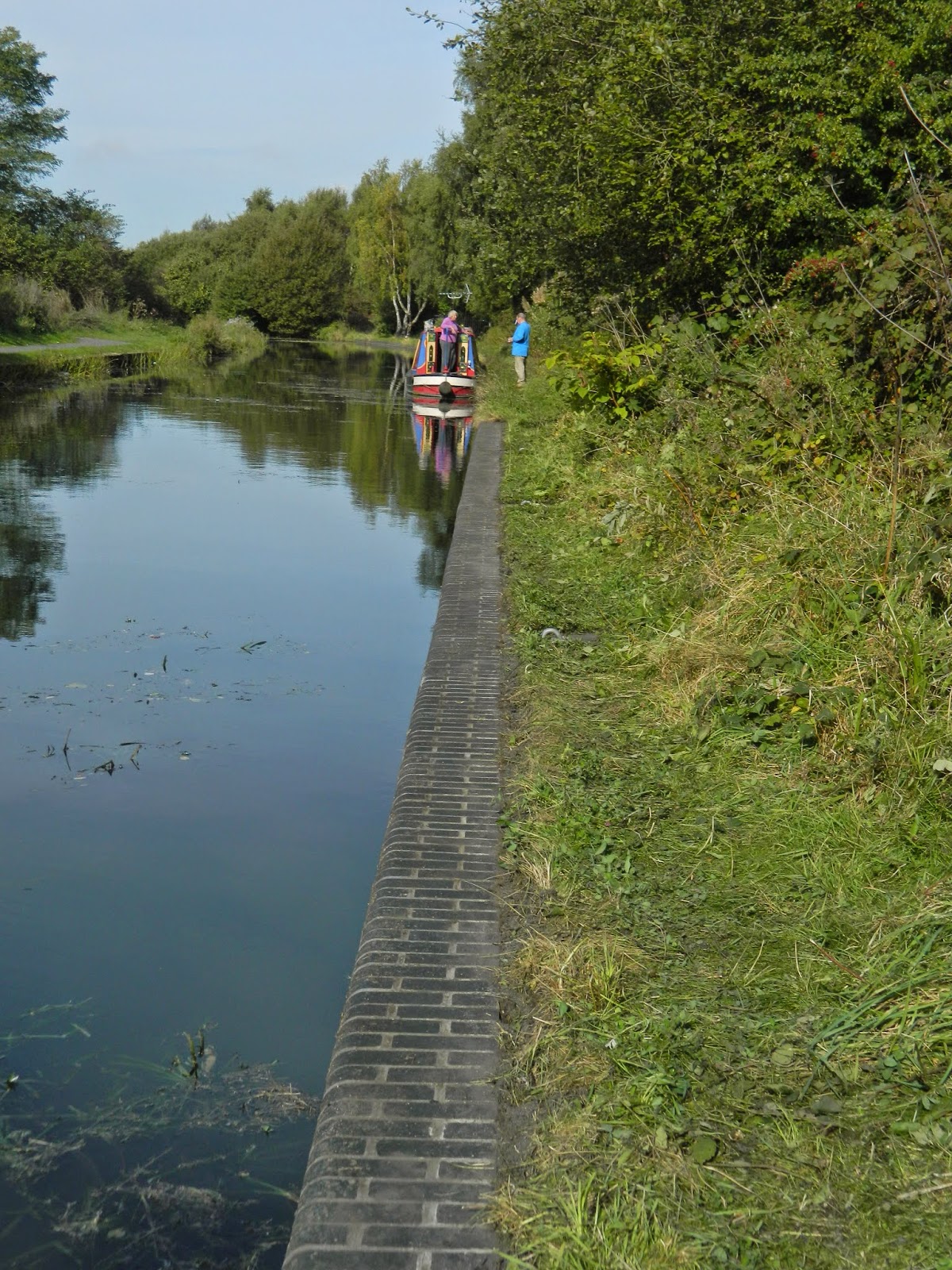 and after.
We shall definitely be visiting this little oasis again - if only to clear it up a bit more, as Dave ran out of strimmer thread!  This is what one man achieved with a shovel over two days.  I wonder what Fountains could do in an hour with all their equipment ..............