Catching up with the blog: Fron to Hurleston

I didn't blog for a few weeks for reasons I won't go into, but suffice to say, I had my confidence severely knocked & stopped blogging.  However, I've decided to say "stuff it" and carry on - after all, this blog is for friends and family who are interested in where we are, what we've seen and what we're up to.  So before it's too late, I'm just going to do a quick blog about our journey down the Llangollen...

We set off from Fron on Sunday 16th Sept, after I had finished my stint in the Information Centre in Trevor Basin.  The IC is apparently going to be kept open Thurs to Sundays & manned by volunteers.  Well that's my job gone - again.  Lets hope it stays open this time.  It was operated by BW in previous years, but didn't open for the summer season in 2011, as the plan was to have it manned by volunteers, but there weren't any, so it remained closed till Wrexham County Borough Council took over the building in March 2012, and put their own staff in there Mon-Fri, with additional staff at weekends (Me & Becky).  Never mind, it was a great job while it lasted.  Anyway, on with the journey....

We hadn't got very far (Chirk) before I realised I had the keys to the IC in my pocket!  Luckily, Mum came to the rescue, picked me up at Chirk tunnel, drove me back to the IC in Trevor, where I deposited the keys.  We then caught up with the boat at Chirk Bank, and after doing the whole "goodbye" thing again with Mum, we continued on to our first port of call, The Jack Mytton Inn (AKA Mad Jacks).

As it was our first night away, we decided to celebrate our departure and have our dinner in Mad Jacks.  I ordered steak & ale pie, which arrived at the table completely black and charred.  "Everything all right?" says the waitress.  "Well, no actually - this pie is completely burned and inedible".  "Oh, do you want me to take it back?"  "Well, yes".  "Do you want another one?"  "Yes!"  Unfortunately the replacement pie had been microwaved and was soggy.  What a disappointing start to our cruising.  I was so annoyed that the chef thought it would be acceptable to serve a black, charred, burned to a crisp pie.  To put the tin hat on it, the landlord passed by sneezing saying "sorry about that, I've got a chest infection".  Thanks.  Never mind it's only taken almost 3 weeks, but Dave and I now seem to be getting over a monstrous cold!  We'll still be calling in at Mad Jacks - but only for the beer from now on, which remains excellent. 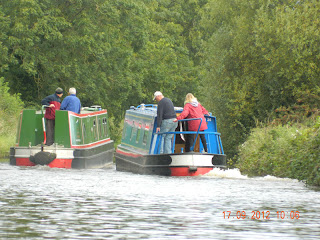 Race, race, race.  here's a Middlewich hire boat overtaking a Canaltime on a bend near Mad Jacks, that's after he rammed him from behind! 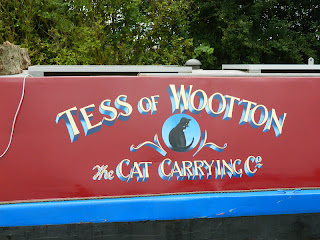 We met up with Mike & Hazel for a pint or two in the White Hart, reputed to be the oldest pub in Shropshire.  They've had some signwriting done on Tess.  Very nice. 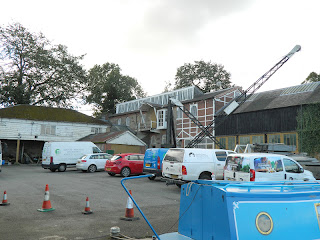 Through Ellesmere, past the BW sorry CRT yard 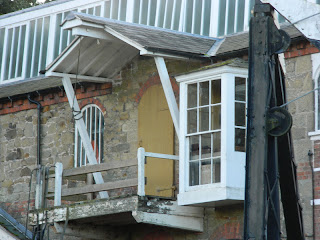 and the imposing Foreman's viewing gallery, he would be able to see everything going on in the yard from that vantage point 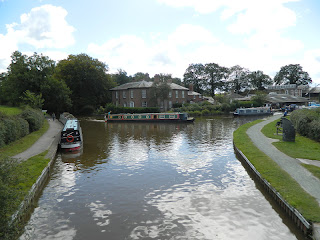 Right turn at Ellesmere, past Beech House built and opened as the main canal office in 1805 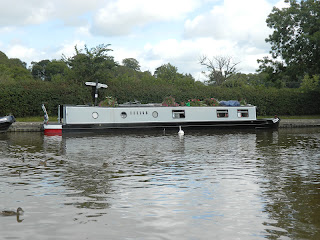 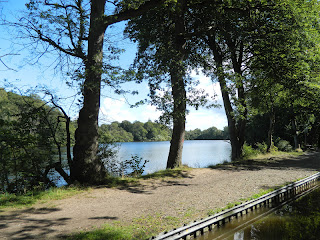 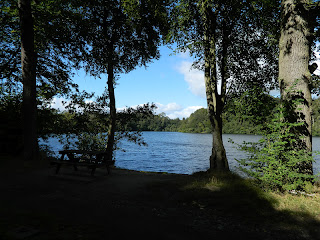 Blakemere in the sunlight 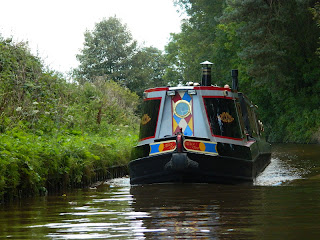 NB Alice with, what can only be described as an extension!  This is a removable bow section, which fits around the bow of the "pushing" boat.  I was too busy taking pics to notice that the occupants were shouting to us - we then recognised them as a couple we'd met back in 2006 in Birmingham for the "Save our Canals" rally, though they didn't have this extra bit (Alice Two) strapped to the front of Alice.  We finally twigged who they were & shouted greetings as we passed. 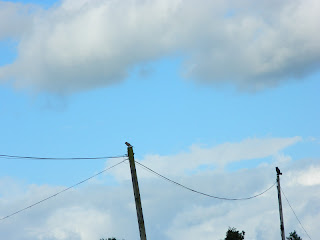 Two birds sitting on telegraph poles - but are they real? 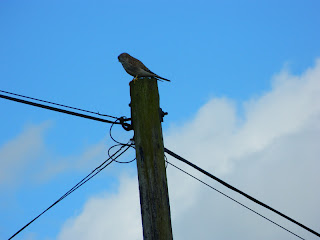 This one is, I think it's a kestrel 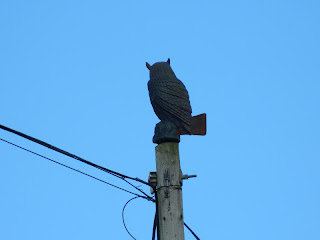 this one isn't, its a carving of an owl just before Platt Lane,
where incidentally, Dot & Kevin (Chirk Marina) who live nearby, took us to the Horseshoe Inn, Tilstock.  Unfortunately the Waggoners (the one near the canal) remains shut, in fact there's only three walls left standing after a fire, no roof either, so it's unlikely that it will ever reopen. 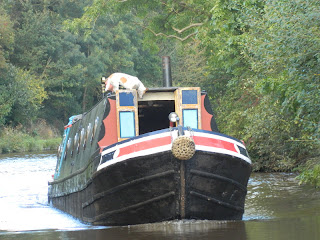 Whilst moored at Platt Lane Bridge, Steve Furniss from Llangollen Wharf passed us on Bootes, on his way back from his holidays, so we had a quick chat as he passed. 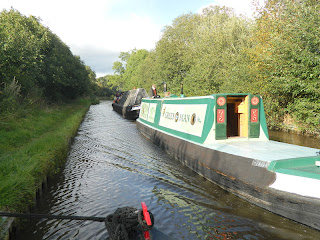 He was followed by The Green Man pulling Saturn, the Shroppie fly boat, on their way back from the Whitchurch boat rally 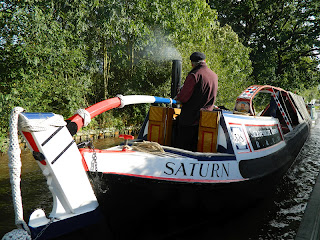 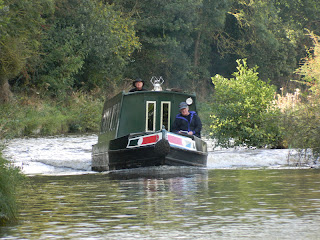 Closely followed by this speeding Anglo Welsh.  I did ask him to please leave some canal for us to return to as his waves were washing the bank away. "Eh" was the response. 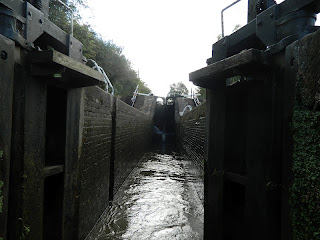 Grindley Brook locks, and a catch up with Buffy on the way through 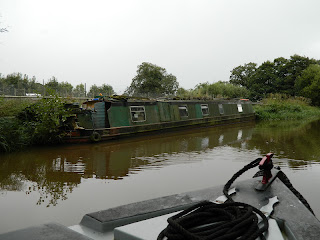 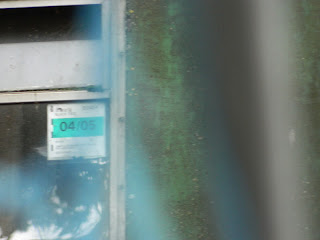 last licenced in 2005 & still with no licence according to the CRT on-line checker,
talk about taking the p***!
We stayed a few days in Wrenbury, in order for me to catch the train back to Chirk & go back to work for a final weekend.  Dave was extremely pleased to be there, as it meant he could visit  The Bhurtpore Inn [click].  A pub that never disappoints!  There were 11 real ales on, with additional ciders.  The food there is always excellent.  Mum and Tony kindly brought me back to Wrenbury, so we went for supper in the Bhurtpore.  Restores your faith in pubs!

Shame about Mad Jacks, we had an excellent meal there a few weeks ago, maybe the chefs day off ??!!

If anyone says otherwise that's their problem. I had a similar thing happened in August. Decided to shut my blog down, then like you thought why should I?!

It was a big relief when I left UKWRS, I now feel free to blog about anything, & everything without being judged.

Whatever the problem was, I hope you do too.