Must be a record breaking day for boats

On Tuesday (30th May) we had a total of 104 boats go past us.  Yes, I know, we must get out more, but as we were here all day and the previous few days had seemed rather busy for boats, and Tuesdays are always the busiest day of the week, we counted each boat that went past.  The majority of these boats were going to Llangollen, so today Wednesday, they're all coming back down.  I doubt there were any moorings free in Llangollen on Tuesday night, which - rumour has it - will be increasing the mooring fee from £6 per night to £10 per night from next year.  Whichever way you look at it, 104 boat movements is rather alot.  We hope that this year will be similar to last year - everyone comes up the Llangollen canal in spring to avoid the "busy" time of the summer, so the summer isn't really as bad as people like to make out.  We haven't even been hit this week - yet - (I shouldn't have written that statement down).

I'm able to blog again after ditching Vodafone and switching to Orange.  This was after downloading "improvement software" from Vodafone corrupted all sorts of files on my computer and rendered it useless.  Vodafone said it wasn't their problem, & PC World didn't want to know either, despite paying them £8 per month to fix any problems.  So it was back and to between the two shops, getting more and more frustrated.  PC World eventually agreed to fix the problem - but only after bumping into an old friend who happened to work there!  I think we'll do the same with the mobile phones as the signal strength for Vodafone is hit and miss here in Fron.  So now the computer is working again, here's a few random photos I wanted to publish but couldn't: 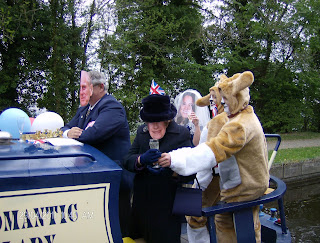 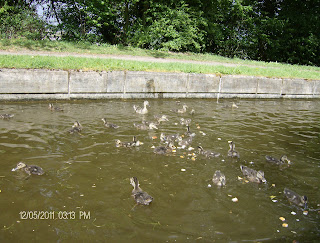 This duck roamed back and forth collecting ducklings as she went - she ended up with 28 of varying sizes. 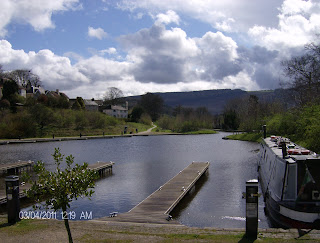 Beefur with Llangollen moorings to ourselves - before the season started. 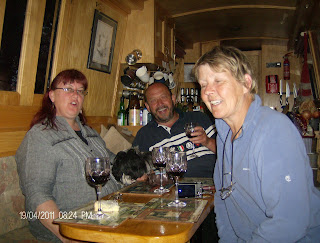 Having a glass of ribena with Graham & Jill on Matilda Rose when they visited back in April. 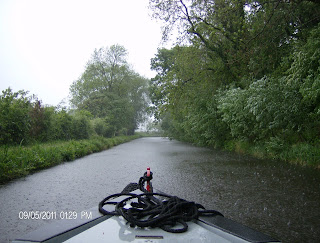 We met up with MR again two weeks later down the Monty - the weather had changed for the worse by then, with rain coming down like stair rods.  Luckily for me, it was Dave's turn to drive the boat.  It's still beautiful down there - whatever the weather.
Posted by Sue Hunter at 09:22